This blog continues the Civic Federation’s examination of indicators that can be used to assess the financial health of local governments. The Federation is working on a project comparing the City of Chicago with a group of thirteen large U.S. cities that have also been the subject of analysis by the Pew Charitable Trusts’ Philadelphia Research Initiative. Previous entries examined the City of Chicago’s fund balance ratio, continuing services ratio, operating deficit ratio and debt service expenditure ratio. This blog examines the current ratio.

The current ratio formula uses the current assets of a municipality, including:

The chart below compares the current ratio for 13 U.S. cities between FY2006 and FY2010, the most recent years for which data is available for all of the cities. Over the five-year period, the City of Chicago’s current ratio decreased from its peak of 2.3 in FY2006 to 2.1 in FY2010. At its lowest point in FY2008, the City’s government-wide current ratio remained relatively healthy at 1.8. 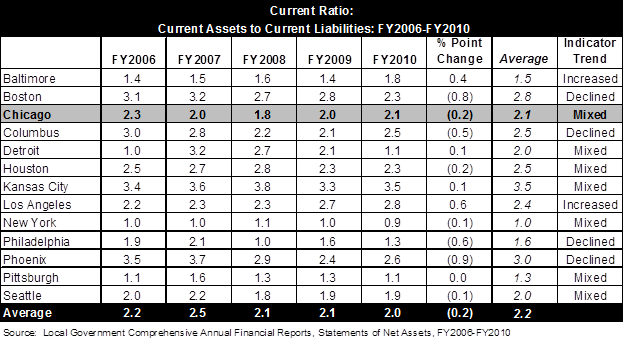 To help explain the fluctuations in the current ratios noted above, the exhibit below shows unrestricted current assets and current liabilities for each of the cities from FY2006 to FY2010. The slight dip in Chicago’s current ratio in FY2008 can be attributed to a $553.4 million decrease in unrestricted current assets. This includes a decrease of nearly $200.0 million in cash and cash equivalents and a loss of $351.3 million in investments government-wide.[2] These losses are in part a result of debt financing used to support the City’s capital improvement program.[3]

Similarly, the decline in Phoenix’s current ratio can be attributed to a $304.1 million loss in cash and cash equivalents over the five-year period. During that time period, the current portions of noncurrent liabilities (amounts due within one year) increased as payments for matured bonds, certificates payable and interest payable increased.[4] The rise in Los Angeles’ current ratio could be attributed to simultaneous increases in current assets and decreases in current liabilities since FY2006. The increase in current assets is due to more cash and pooled and other investments as a result of growth in tax revenues, transfers from business-type activities and proceeds from the issuance of long-term debt.[5] The significant decrease in current liabilities in FY2009 was primarily due to a decrease in obligations under securities lending transactions as a result of the temporary suspension of the city’s Securities Lending Program in November 2008.[6]

In the City of New York, the current ratio has remained relatively flat but at a near one to one ratio of assets to liabilities. In FY2010 when the current ratio dropped to 0.9, the city had reported an excess of total liabilities over total assets of $108.4 billion. Much of the deficit was due to increasing long-term liabilities, including long-term debt with no corresponding capital assets and the city’s other post-employment benefits liability.[7] The increase in current liabilities can be attributed to higher payments for interest payable, unearned revenues, payments due to component units of government and noncurrent liabilities due within one year.[8]

[6] The City Council of the City of Los Angeles approved a Securities Lending Program in 1991 to safely monitor loaned securities and prudently invest cash collateral to enhance revenue from the investment program. Due to the volatility in the financial markets in 2008, the City temporarily suspended the program. City of Los Angeles, Comprehensive Annual Financial Report FY2009, pp. 7 and 83.