This blog continues the Civic Federation’s examination of indicators that can be used to assess the financial health of local governments. The Federation is working on a project that compares the City of Chicago with a group of thirteen large U.S. cities that have also been the subject of analysis by the Pew Charitable Trusts’ Philadelphia Research Initiative. Previous entries examined the City of Chicago’s fund balance ratio and continuing service ratio. This blog examines the operating deficit ratio.

The operating deficit ratio shows the general fund operating surplus or deficit as a percentage of total operating expenses on an actual basis and not a budgeted basis. Governments and the media often report the projected deficit or budget shortfall for the upcoming fiscal year as they are developing a budget. This provides a framework for the government to determine how much expenditures need to be reduced, revenues increased or reserves used.  In contrast, the operating deficit ratio examined here is rarely widely reported. It reflects the difference between revenues and expenditures in completed fiscal years.

A deficit in one year does not necessarily indicate financial difficulty. A government may have had an unusually large expenditure in the current year, but prudently planned for such events by conserving resources in previous periods. Credit ratings agencies are generally concerned when there are two consecutive years of deficits, when the size of deficits is increasing or when there is an abnormally large deficit (5% to 10%).[1] In addition, the continuous recurrence of deficits may exhaust a government’s reserves.

The chart below compares the general fund operating deficit ratio for 13 U.S. cities between FY2006 and FY2010, the most recent years for which data is available for all of the cities. In FY2010 the City of Chicago had an operating deficit of 13.9% of expenditures, a significant increase from its operating deficit of 4.6% in FY2006. The shift is largely due to a loss of $158.1 million in General Fund revenues and an increase of $131.7 million in General Fund expenditures over the five-year period.[2] Chicago’s largest deficit during this time was in FY2009, of 15.0%. Much of the lost revenue that fiscal year occurred in sales, income and transaction taxes.[3]

During the same five-year period, only Atlanta’s deficit situation improved from an operating deficit ratio of 20.4% in FY2006 to an operating surplus ratio of 17.5% in FY2010.[4] The shift can be attributed to increased revenues in the General Fund, including a $59.6 million increase in property tax revenues, and a $36.8 million reduction in General Fund expenditures from FY2009 to FY2010.[5] Property taxes increased mostly due to a property tax increase approved during the 2009 calendar year as part of Atlanta’s FY2010 budget. Costs were contained by managing vacant positions in governmental departments and reducing the annual pension cost.[6] 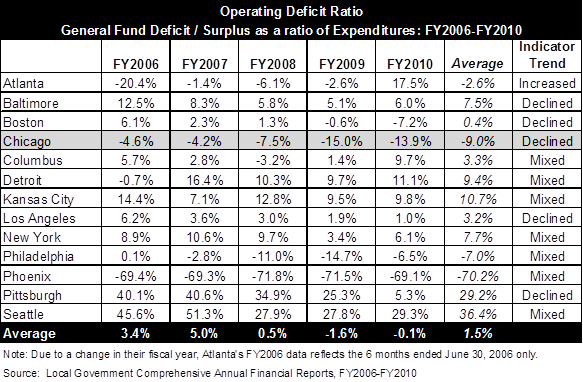