A government’s fund balance represents savings that it has accumulated and is an important indicator of fiscal health. Previously this blog compared the fund balance levels and policies of the nine Chicago area local governments whose budgets the Civic Federation analyzes. This blog entry compares Chicago with a group of thirteen large U.S. cities that have also been the recent subject of analysis by the Pew Charitable Trusts’ Philadelphia Research Initiative.

While there was a clear downward trend in average fund balance for this group of cities in total, some cities experienced somewhat different patterns. For instance, the fund balance of Atlanta and Seattle had significant fluctuations. Atlanta has had considerable variations in general fund expenditures and it also transfers out resources to its capital fund, which may have contributed to the large changes. Kansas City and Columbus experienced slight improvements in fund balance between FY2009 and FY2010 after previous declines. Detroit continued to have a deficit in FY2010, but the size of the deficit shrank from the previous year. 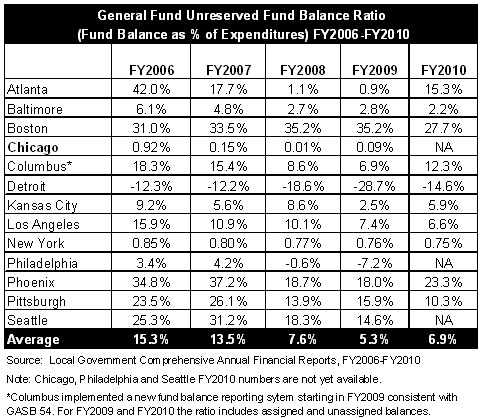 For FY2009 Chicago had only a nominal unreserved general fund balance equal to 0.09% of general fund expenditures. Not considered in this analysis are legally restricted asset lease reserves held in a separate fund which the City has also been depleting. This extremely low level of fund balance is an indicator of fiscal distress. New York had a slightly better, but still low fund balance level. However, it has much larger general fund expenditures ($57.9 billion versus Chicago’s $3.0 billion in FY2009), which allows more flexibility for a smaller balance and it has had a much more stable ratio.

The next chart presents the fund balance changes for the three largest U.S. cities in dollars instead of as a ratio. Chicago experienced the largest monetary decline in fund balance, decreasing 90.1% over the four years for which data is available. Los Angeles also declined significantly, falling 44.6% in five years. New York’s fund balance increased slightly despite a slight decline in its ratio because the balance did not grow as fast as expenditures. 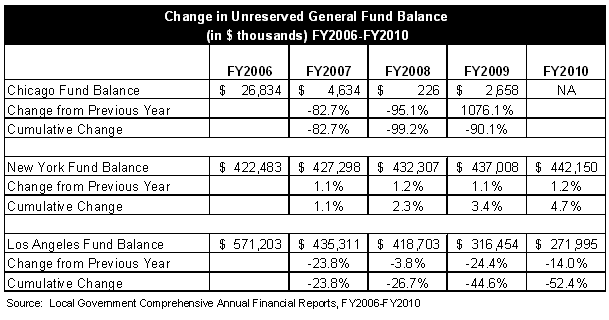 Overall the analysis indicates a significant deterioration of fund balance over the past five years among the 13 municipal governments, with a few units beginning to recover some of the lost balances in FY2010. The City of Chicago generally compares poorly to the other cities, ranking near the bottom in terms of its current fund balance ratio and in its trend over time.