The Civic Federation is working on a project to examine indicators that can be used to assess the financial health of local governments. Previously, this blog compared Chicago’s fund balance with a group of thirteen large U.S. cities that have also been the subject of analysis by the Pew Charitable Trusts’ Philadelphia Research Initiative. This entry compares Chicago to the same group of cities for a different indicator: the continuing services ratio.

While the fund balance ratio considers only a government’s general fund, the continuing services ratio offers a broader analysis. It is important to examine the general fund because it is the chief operating fund for cities and the fund that government has the most flexibility and discretion in how to use. However, it is also useful to examine a government’s funds entity-wide, including special purpose funds and business-type enterprise funds because a fiscally stressed general fund may appear to be healthy due to transfers or loans from other funds into the general fund.[1] There could also be fiscal distress in a city’s other funds. The continuing services ratio financial indicator examines unrestricted net assets for all funds as a percentage of expenses for all funds. This indicator measures the degree to which unrestricted net assets can support continuing government services.[2]

A government’s net assets are the difference between all its assets and all its liabilities. Net assets are reported in three categories: invested in capital assets (net of related debt), restricted and unrestricted. The first category shows the value of capital assets minus the outstanding debt that was incurred to build the assets. Restricted net assets are limited to a specific purpose, such as activities funded by grants from other governments or revenues set aside for payment of debt service. Unrestricted net assets are the net assets not included in the other two categories and can generally be used for any purpose. They are not necessarily cash assets and may in fact be a negative number, or deficit, because they include offsetting liabilities. For example, large unfunded pension or retiree health care liabilities may contribute to an unrestricted net assets deficit even though those long-term liabilities are not all due in the current year.

Having negative unrestricted net assets does not mean that a government is insolvent or in financial crisis, but rather that it has accumulated long-term liabilities that are greater than the current value of its assets. Negative unrestricted net assets demonstrate the extent to which future taxing power has already been committed to payment of liabilities.[3] This brings up the issue of intergenerational equity because liabilities have been incurred in providing services, but not enough assets have been set aside to cover them. In other words, future generations of taxpayers will need to pay for liabilities incurred in the past.

The chart below compares the continuing services ratio for 13 U.S. cities between FY2006 and FY2010, including a description of the trend for each city. Chicago had a continuing services ratio of -96.3% in FY2010, which means that the City’s long-term commitments exceed available resources by the equivalent of nearly one year of expenditures. This is primarily driven by long-term liabilities including future liability claims ($656.0 million), pension obligations ($4,144.5 million) and other post employment benefits ($380.9 million). Another factor is a deferred inflow[4] of $1,660.4 million that is to be amortized into income over the life of the City’s concession service agreements related to the City’s asset lease transactions.[5]

New York City had the lowest continuing services ratio of the 13 cities; or -142.2% in FY2010, which means its long-term commitments exceed its available resources by the equivalent of nearly a year and a half of expenditures. The City of Los Angeles has a continuing services ratio of 13.0% in FY2010. It has available resources in excess of its commitments, which makes it better able to maintain services with its current revenue structure than those cities with negative ratios.

Pittsburgh had the lowest 5-year average continuing services ratio at -133.8%, but was the only city to steadily improve its ratio over the time period examined. Phoenix had the highest average ratio at 53.3%. About half of the cities experienced decreasing ratios over five years consistent with a deterioration of economic condition while the other half had more variable trends. 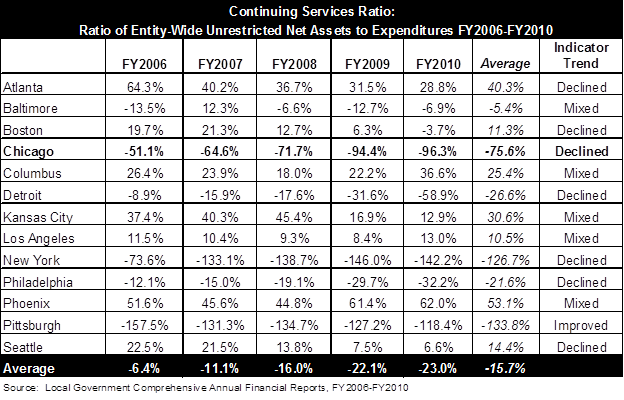 Chicago had the third lowest average continuing services ratio over five years. More troubling was the steady downward trend over five years, which means that the City is accumulating liabilities without maintaining offsetting assets. This indicates that Chicago’s current fiscal structure and level of services may not be sustainable in the long-term.