In the face of unfavorable market conditions triggered by the downgrade of its bond rating last week, the State of Illinois announced that it would not complete the bond sale originally scheduled for today, January 30, 2013.

A Governor’s spokesperson said that after talks with potential bidders, State officials are concerned about the deal and need to wait for markets to stabilize before selling its debt. The bond sale was for $500 million in new capital purpose General Obligation Bonds (GO Bonds) to be sold through a competitive bidding process.

The Governor’s Office of Management and Budget issued the following statement, “The State of Illinois has delayed Wednesday’s scheduled bond sale. Our conversations with potential bidders lead us to believe the market is unsettled because of recent actions and comments by the bond rating agencies. We plan to schedule a new bond sale after the markets have had time to digest the news.”

It is unclear how long the sale will be delayed or what conditions will draw the State back into the market. In advance of the bond sale, Standard and Poor’s downgraded the State’s GO Bond rating to A- from A with a negative outlook.

Due to inaction on pension reform and its ongoing financial crisis, the State of Illinois received  another downgrade to its bond rating as it prepares to issue half a billion dollars in new capital debt next week.

Standard and Poor’s (S&P), one of the three major bond ratings agencies, reduced Illinois’ rating to ‘A-’ from ‘A’ on January 25, 2013 and included a negative outlook as part of its analysis. The State is now tied with California, which has been rated A- since January 2010, as the lowest rated states by S&P. However, California’s outlook from the agency is positive. This marks the second time in the last six months that S&P has reduced Illinois’ rating.

The S&P downgrade comes after Fitch Ratings affirmed an ‘A’ rating of Illinois’ General Obligation bonds (GO Bonds) on January 24, 2013, which is one step above its ‘A-’ rating of California. Fitch also maintained a negative outlook for Illinois and considers California’s rating stable. Moody’s Investors Service has rated Illinois the lowest of all 50 states since it downgraded the bond rating in January 2012, and the agency affirmed this rating on January 25, 2013 along with a negative outlook for Illinois. Moody’s rates California as A1, one step higher than Illinois, and with a stable outlook.

As previously discussed here, despite the low ranking among its peers, Illinois’ bond ratings remain investment grade and would require at least four further downgrades from any of the agencies before falling into speculative or “junk” status.

The following chart shows Illinois’ bond ratings from all three major agencies dating back to FY2008, including the latest downgrade from S&P. 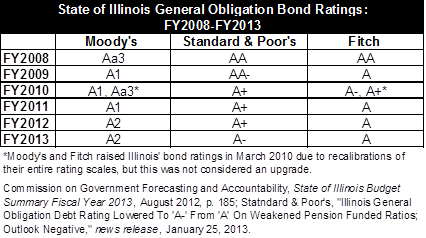 All three agencies based the negative outlook on the failure of elected officials to address the State’s growing unfunded pension liability. In its analysis, S&P specifically warned that, “While it is unusual for a state rating to fall into the 'BBB' category, lack of action on pension reform and upcoming budget challenges could result in further credit deterioration, particularly if it translates into weaker liquidity.”

The ratings agencies also highlighted two other fundamental weaknesses: Illinois’ accumulated multibillion dollar backlog of accumulated bills, which severely delays payments to its vendors, and the impending partial rollback of the 2011 income tax rates. In January 2011, the State increased the individual income tax rate from 3.0% to 5.0% and the corporate rate from 4.8% to 7.0% (the State also collects the Personal Property Replacement Tax at a rate of 2.5% on corporate income on behalf of local governments). Under the law, the income tax rates partially sunset on January 1, 2015, falling to 3.75% for individuals and 5.25% for corporations. As discussed here, this will dramatically reduce State revenues starting in FY2015 and FY2016, further complicating the State’s ongoing fiscal problems.

It is unclear how much the downgrade from S&P will affect the cost of the State’s forthcoming $500 million bond issuance. The new capital purpose debt is scheduled to be competitively sold on January 30, 2013. Bond ratings are one of the factors that heavily influence the amount of interest investors demand from governments to purchase their debt. Although prices have recently fallen for Illinois debt, it has been well documented that the State has been paying higher premiums than other states to issue bonds due to its low ratings and ongoing financial weakness. In preparation for issuing bonds, the State applies for ratings to each of the agencies, which then prepare a financial analysis of the State for a fee that is part of the cost of each bond issuance. Since the authorization of the Illinois Jobs Now! capital program in FY2010, the State has issued $5.0 billion in GO Bonds to support statewide infrastructure projects.