A new report by Governor Bruce Rauner’s administration projects that the State of Illinois’ backlog of unpaid bills could grow to $25.0 billion in FY2019 from $4.4 billion in FY2015 based on current tax and spending policies.

The projected growth in unpaid bills is not surprising in light of the decrease in income tax rates that took effect midway through FY2015 and the State’s hefty contributions to its dramatically underfunded pension funds. State officials closed the budget gap in FY2015 mainly by using budgetary gimmicks and one-time revenue sources.

As discussed here, Illinois has been operating without a General Funds budget since the start of FY2016 due to an impasse between the Governor and the General Assembly. The new FY2016 estimate provides the administration’s first projection of expected spending in the current fiscal year.

The Governor’s Office of Management and Budget (GOMB) has been required to issue the three-year forecast in early January since 2011 as part of an economic and fiscal policy report. This year’s report is the first under Governor Rauner, who took office on January 12, 2015, after the publication of the 2015 report.

Governor Rauner’s projection also assumes the continuation of existing spending and revenue policies. The following table summarizes the information in the new projection. 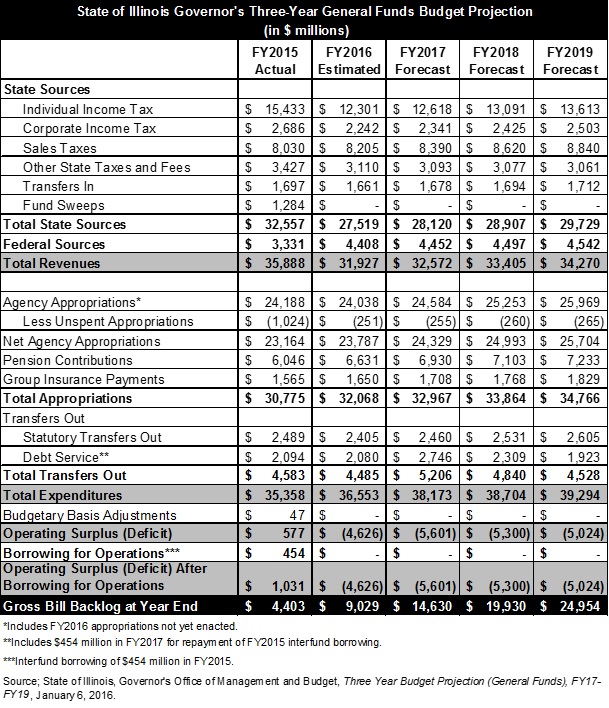 The relatively high spending increase in FY2016 reflects a jump in statutorily required pension contributions and artificially low General Funds Medicaid spending in FY2015, when the State used FY2014 revenues to pay for FY2015 Medicaid expenditures. Projected spending in FY2017 includes the repayment of the FY2016 interfund borrowing and an increase in debt payments owed on pension bonds issued in 2011.

As discussed here, the State has been paying a large portion of its expected FY2016 expenses even without a General Funds budget due to statutory requirements, consent decrees and court orders. In addition, although Governor Rauner and the Illinois General Assembly have not reached agreement on most of the FY2016 general operating budget, the Governor did sign an appropriation bill for elementary and secondary education. In all, the State is authorized or compelled to spend approximately $31.5 billion out of General Funds in FY2016, according to documents issued in connection with the State’s upcoming bond sale on January 14.

The $31.5 billion does not include group health insurance, the cost of which must be paid eventually because of State law and union contracts. Other areas that have historically been funded but are not being financially supported currently are public universities and community colleges, monetary assistance grants for college students, human services programs not covered by Medicaid and operational expenses of certain agencies. The new FY2016 General Funds spending estimate allocates $5.1 billion to currently unfunded areas, bringing total expected expenditures to $36.6 billion.

The following table compares FY2016 spending in the new three-year projection to the FY2016 autopilot budget in Governor Rauner’s recommended budget document issued in February 2015. The autopilot or maintenance budget in the recommended budget was intended to show expenditure levels needed to support existing State programs and services. 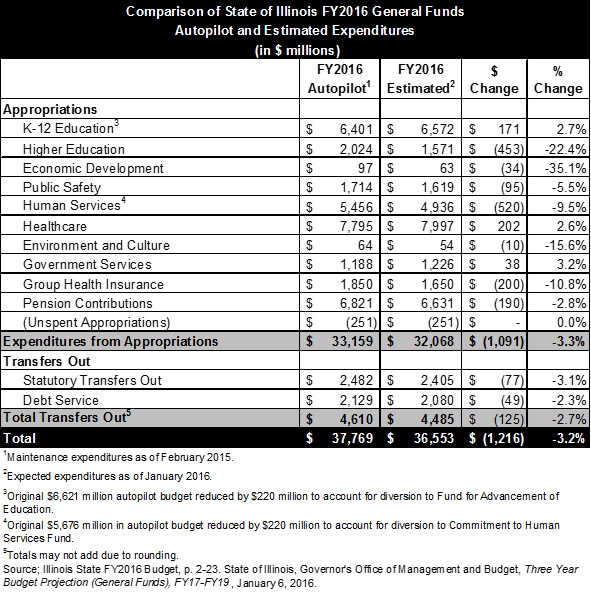 In the table above, FY2016 autopilot expenditures total $37.8 billion. This represents a decrease of $440 million from $38.2 billion autopilot spending in the recommended budget document. The original number did not properly account for the statutorily required diversion of $220 million to each of two separate funds to support education and human services, according to GOMB.

The expected spending in FY2016 is $1.2 billion below the FY2016 autopilot budget. The major reductions include the following:

Although estimated FY2016 spending of $36.6 billion is below the autopilot budget, it is significantly higher than the $31.5 billion in FY2016 expenditures proposed by Governor Rauner in February 2015. The Governor’s recommended FY2016 budget provided for a balanced operating budget with a slight surplus to pay down a portion of the State’s backlog of unpaid bills. As explained here, the proposal was based on spending cuts to most areas of government as well as steep reductions to employee pension and healthcare benefits that were subject to legal challenges or labor negotiations.

The General Assembly’s FY2016 General Funds spending plan of about $36.3 billion did not include revenues to close the operating deficit and was largely vetoed by the Governor. Governor Rauner has said he would consider tax increases, but only in connection with the enactment of his Turnaround Agenda. The agenda includes changes in workers’ compensation; limits on damages in civil lawsuits; constitutional amendments on term limits and redrawing legislative districts; and a freeze on local property taxes, combined with measures to cut costs for local governments by limiting the scope of collective bargaining and eliminating prevailing wage requirements.

As stated in the new report, “With progress in the Turnaround Agenda that would ensure our State’s future, the Governor is willing to partner with legislators to increase revenues and responsibly limit spending.” The report notes the Governor’s desire to reduce State payments on pensions, health insurance and Medicaid, but does not provide details.

More specifics are expected on February 17, 2016, when Governor Rauner is scheduled to present his budget proposal for FY2017.