The State of Illinois will need to increase contributions to its pension funds by $682.0 million in the next budget year, according to preliminary amounts released by the State’s five retirement systems.

Total pension contributions required by State law are estimated at $7.5 billion in the year that ends on June 30, 2016, up from $6.9 billion in FY2015. The steep increase is mainly due to decisions earlier this year by the three largest funds to reduce their assumed investment rates of return.

Actual investment returns were strong in FY2014, resulting in an improvement in the combined funded ratio of the five systems to 42.9% as of the end of the budget year from 41.1% at the end of FY2013, based on the market value of assets. However, the systems’ total unfunded liability continued to grow—to $104.6 billion as of June 30, 2014 from $97.5 billion at the end of the 2013 budget year—because of insufficient contributions required by State law and reductions in the assumed investment rates of return.

The proposed contributions for FY2016 and financial results for FY2014 are based on the Illinois pension law that was in effect before the enactment of major pension changes in December 2013. Public Act 98-0599 has been challenged in court by labor unions, retirees and employees, who allege that it violates a provision of the Illinois Constitution that protects pension benefits.

Implementation of the law was put on hold in May 2014 by a Sangamon County Circuit Court judge. Judge John Belz is scheduled to hear arguments in the case on November 20 and has said he expects to issue a ruling by the end of this year. The Illinois Supreme Court is expected to make the final decision on the law’s constitutionality. 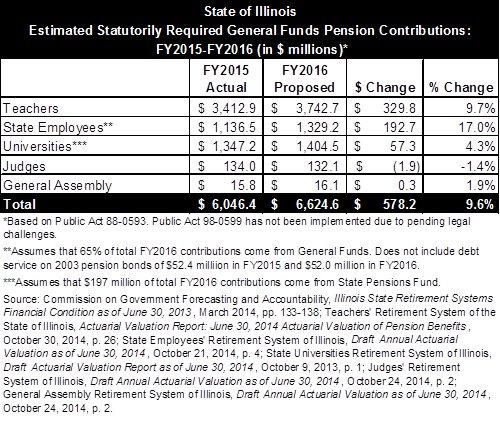 State contributions to the retirement systems are currently governed by a 50-year funding plan (Public Act 88-0593) that began in FY1996. After a 15-year phase-in period, the law requires the State to contribute a level percentage of payroll sufficient to bring the retirement systems’ funded ratios to 90% by FY2045.

The funding plan and subsequently enacted changes defer a large portion of the required State contributions to later years and have been insufficient to prevent growth in the unfunded liability. For example, TRS said the State would have to contribute $5.3 billion in FY2016 to keep the unfunded liability from increasing, far in excess of the proposed statutorily required contribution of $3.7 billion.

Approximately 89% of State pension contributions come from General Funds. SERS receives about 35% of its State funding from other funds that support State agency payrolls and SURS receives contributions from the State Pensions Fund, which is funded from the sale of unclaimed property. 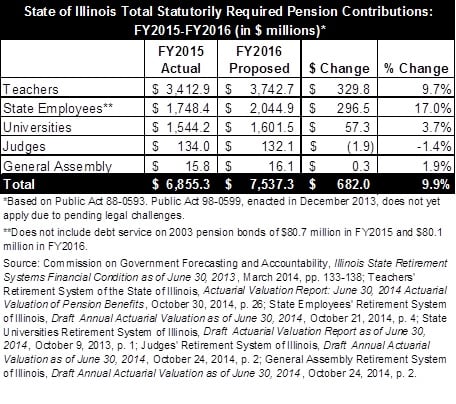 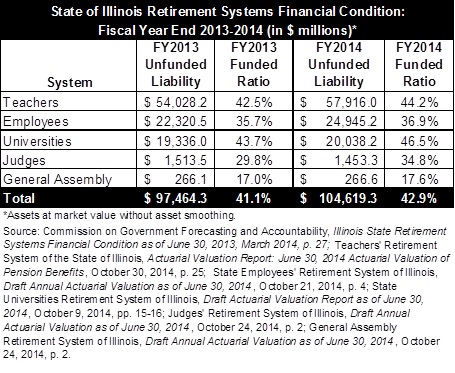 Since FY2009, State law has required that the actuarial value of assets be based on asset smoothing, in which unexpected gains or losses in any fiscal year are recognized over five fiscal years. On that basis, the combined funded ratio stayed flat at 39.3% at the end of FY2014 from FY2013, and the total unfunded liability increased to $111.2 billion from $100.5 billion. Smoothed asset values continued to reflect investment returns in FY2012 that were below assumed rates of return.