UPDATE: In addition to the Teachers’ Retirement System (TRS), two other large State of Illinois pension funds have also lowered their assumed rates of return on investment.

Both the State Universities Retirement System (SURS) and the State Employees’ Retirement System (SERS) recently reduced their assumed investment rates of return from 7.75% to 7.25%. SURS took the action on June 13, 2014, according to a spokeswoman for the retirement system, while documents show that SERS made the decision on April 8, 2014.

Together the three systems account for approximately 99% of total State pension obligations. The lower return assumptions are expected to significantly increase required State pension contributions beginning in FY2016 and reduce State savings from pension legislation enacted in December 2013. However, it should be noted that the impact of the lower assumed rates could be offset by other factors, including strong investment performance in FY2014.

The State of Illinois’ largest retirement system lowered its assumed rate of return on investment—a decision that will reduce State savings from pension reforms enacted in December 2013.

The assumed rate of return is used to calculate the present value of future pension obligations. Reducing the rate increases the present value of future commitments to employees and retirees and results in higher statutorily required State pension contributions. If investment returns are assumed to be lower, then the State must increase its contributions to provide a given amount of retirement benefits.

TRS covers public school teachers outside of Chicago and had pension obligations of $93.9 billion, or 56.7% of total State pension obligations of $165.5 billion, as of June 30, 2013. The retirement system said in a press release that the latest reduction was triggered by increasing volatility in the international economy and was intended to balance “expected future reality with the needs of TRS members.”

The move by TRS comes six months after the State enacted significant pension changes designed to scale back the State’s massive pension obligations while preserving its retirement systems. As discussed here and here, Public Act 98-0599 reduces pension payments to retirees and employees and requires the State to pay off its pension obligations more quickly and completely than under the previous pension funding plan. The changes affect four of the five retirement systems; the Judges’ plan is not affected.

The new law was scheduled to take effect on June 1, 2014, but implementation has been blocked by legal challenges. Opponents, including labor unions, employees and retirees, contend that the law violates the State’s constitutional pension protections by reducing pension benefits. On May 14, a Sangamon County judge ordered that the law’s implementation would be delayed pending further action on the legal issues.

Even before the court ruling, State pension contributions for the fiscal year that begins on July 1, 2014 were not scheduled to be affected by the new law. The five retirement systems certified required State contributions for FY2015 in January 2014 based on the previous funding plan.

According to projections by the retirement systems, the new law would immediately reduce the State’s combined pension liability by $20.9 billion and lower State contributions by $144.9 billion from FY2016 through FY2045. An actuarial analysis for the legislature’s Commission on Government Forecasting and Accountability showed a similar impact: a reduction of $21.1 billion in the accrued pension liability and total State savings of $137.4 billion through FY2045.

The cost savings analyses were based on TRS’ previously assumed investment rate of return of 8.0%. Taken alone, the reduced rate would significantly increase required State contributions in FY2016, although TRS will not issue a preliminary contribution amount for FY2016 until this fall.

TRS said that the lower assumed investment rate of return would have increased the State’s required FY2015 contribution by $500 million to $3.9 billion from $3.4 billion. The change would have increased the system’s liabilities by $6 billion, increasing TRS’ unfunded liability to $60 billion as of June 30, 2013 and reducing its funded ratio from 42.5% to 39.9%, based on the market value of assets.

The following chart shows the certified FY2015 State pension contributions for TRS and the other State retirement systems. It also shows the systems’ estimated reduction in FY2016 State contributions under the new law compared with the old pension funding plan. 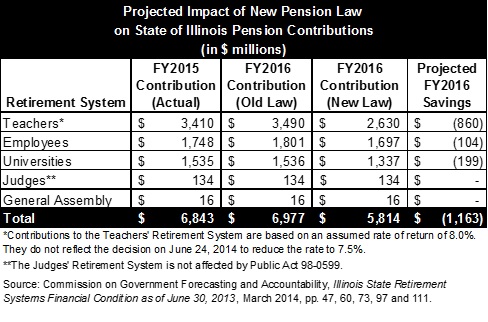 In the chart, projected FY2016 contribution amounts for TRS are based on an assumed investment rate of return of 8.0%, rather than the new rate of 7.5%. Before the change by TRS, the system had estimated that the new law would reduce the State’s FY2016 contribution by $860 million. Total State contributions were expected to be reduced by $1.2 billion.

It is important to note that contribution amounts for FY2016 represent actuarial projections and depend on many factors, including actual investment returns and economic and demographic results.