After decades of dire warnings and several years of legislative negotiations, the Illinois General Assembly on December 3, 2013 passed comprehensive pension reform legislation and Governor Pat Quinn signed it into law on December 5. The legislation is designed to scale back the State’s massive pension obligations while preserving its retirement systems.

Supporters estimate that the plan will result in an immediate reduction of more than $20 billion, or approximately 20%, in the State’s total unfunded liability of roughly $100 billion. As discussed here, pension assets covered only 41.1% of the State’s total pension liability on June 30, 2013, based on the market value of assets. The legislation is projected to save the State $160 billion on pension contributions over 30 years and reduce State contributions in FY2016 by about $1.2 billion.

Despite the significant estimated savings, the outcome of the plan is not certain. Labor unions are expected to challenge its constitutionality in court. Credit rating agencies, which have given Illinois the lowest rating of any state, are also waiting for an actuarial analysis of the legislation before reconsidering their position on the State’s financial condition.

The new law includes numerous provisions that reduce future pension payments to retirees and employees and require the State to pay off its pension obligations more quickly and completely than under existing law. The legislation affects employees hired before January 1, 2011, known as Tier 1 employees; pension payments for new employees were previously reduced by a law enacted in 2010. The new law does not apply to one of State’s five retirement systems, the Judges’ Retirement System. A summary of the law’s major provisions is available on the website of the Teachers’ Retirement System (TRS), the biggest State-funded retirement system.

The law’s largest savings come from a reduction in annual benefit increases. Current retirees and employees hired before 2011, upon retirement, receive an automatic annual 3% compounded increase in their benefits. Regardless of the rate of inflation, the 3% increase is applied to the initial benefit amount plus previously earned increases.

Once the retirement benefit reaches the threshold amount, that limit is raised each year by the increase in the Consumer Price Index (CPI). The retiree’s benefit increase is equal to 3% of the new threshold amount. This formula, while complicated, is intended to protect retirees with modest pensions and many years of service. The legislation also requires current employees to skip between one and five annual increases when they retire.

The following table compares the effect of the existing automatic annual benefit increase with the new increase for a retiree not covered by Social Security with a current benefit of $50,000 and 30 years of service. In calculating the new benefit increase, it is assumed that the CPI rises by 3% a year. 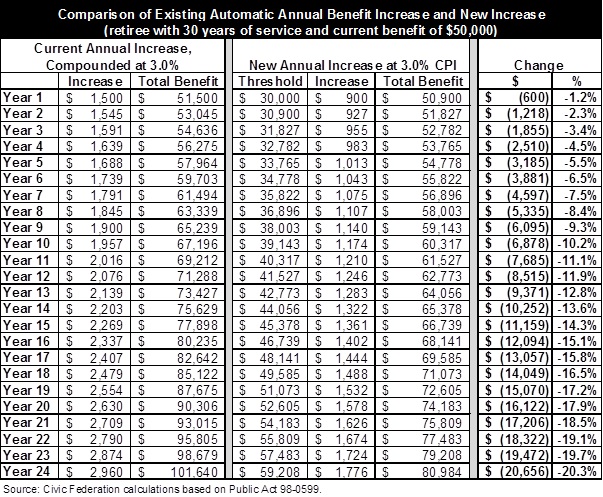 The current automatic annual increase more than doubles the $50,000 benefit to $101,640 in 24 years. The new increase results in a benefit of $80,984 after the same period, a reduction of 20.3%. (The new law is scheduled to take effect in June 2014. It should be noted that the table above and others in this post assume that the effective date is not delayed past January 1, 2015. A delay would cause the Year 2 increase to become the Year 1 increase because the first inflation-adjusted increase occurs on January 1, 2016).

The next table shows the new law’s effect on benefits assuming CPI increases of 1.5%, 3% and 5%.  The example is based on an existing retiree not covered by Social Security with 30 years of service and a current benefit of $50,000. 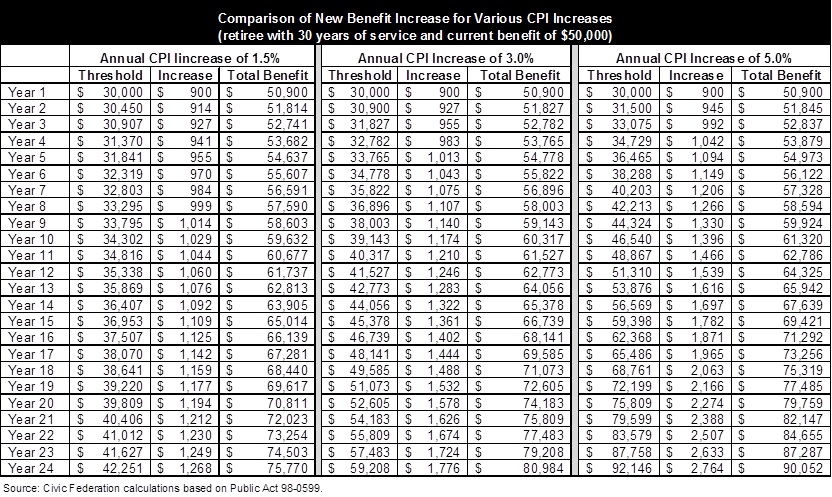 The next table compares the effect of the existing and new benefit increases on retirees with various current benefits. It is assumed that the retirees have 30 years of service and are not covered by Social Security and that the annual CPI increase is 3%. 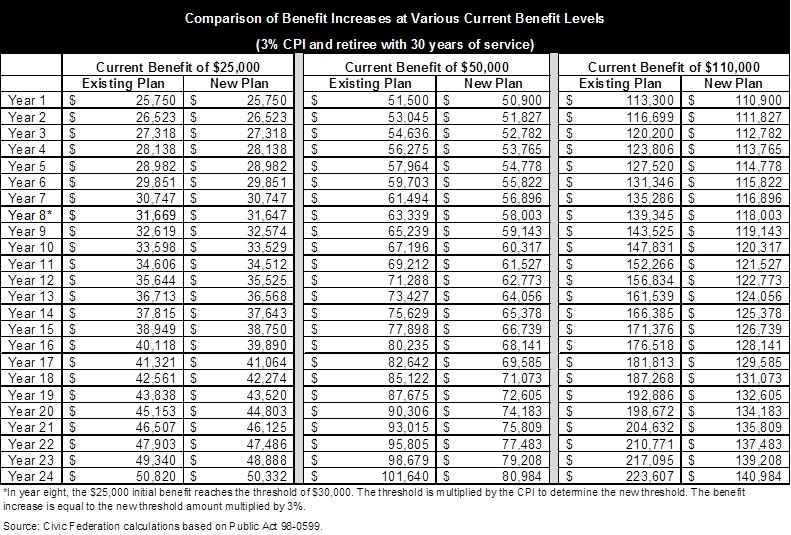