The pension plan enacted by the State of Illinois on December 5, 2013 may preserve more of the benefit increases for current employees than is widely assumed, due to a provision of the new law that ties benefit growth to inflation.

This means that only those who retire before 2016 are affected by the initial multiplier of $1,000 (or $800). Future retirees start with a higher multiplier due to inflation, resulting in larger benefit increases.

Given the complexity of the formula, it might be mistakenly assumed that the initial multiplier is set at $1,000 (or $800) for all retirees, regardless of when they retire. An analysis of the law for the We Are One Illinois coalition of public employee unions appears to have been based on this assumption.

Despite the inflation adjustments, the reduction in annual benefit increases is the largest source of expected State savings from Public Act 98-0599. According to supporters, the law will immediately reduce the State’s unfunded pension liability of approximately $100 billion by 20% and reduce State pension contributions by $160 billion over 30 years. The legislation affects employees hired before January 1, 2011, known as Tier 1 employees; pension benefits for new, or Tier 2, employees were previously reduced by a law enacted in 2010.

Annual benefit increases are currently paid at a compounded rate of 3% for retirees and for Tier 1 employees, upon retirement. Under the new legislation, which is scheduled to take effect on June 1, 2014, the 3% compounded benefit increase applies only to benefits below a specified threshold. The initial threshold is equal to $1,000 times years of service for the majority of participants, who are not covered by Social Security, and $800 times years of service for those covered by Social Security. For example, for a retiree with 30 years of service, the initial thresholds are $30,000 or $24,000. 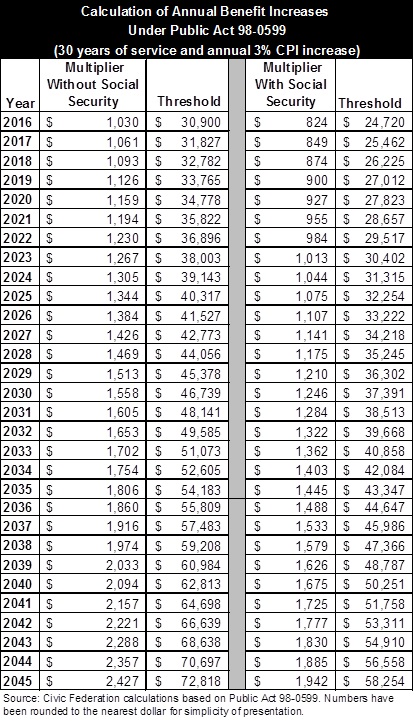 Once the retirement benefit reaches the threshold, the annual benefit increase is equal to 3% of the annually calculated threshold amount. This formula, while complicated, is intended to protect retirees with modest pensions and many years of service. The legislation also requires current employees to skip between one and five annual increases when they retire, depending on their current age.

The next table compares benefit increases under the existing plan and new plan for a SERS member covered by Social Security who is 43 years old when the law takes effect. The individual is assumed to retire in 15 years with 30 years of service and an initial benefit of $72,000. The annual CPI increase is assumed to be 3%. Because he is 43, the employee must forfeit five annual increases upon retirement. The increases are skipped every other year for ten years, beginning with the second scheduled increase. The individual’s retirement age also increases by one year. 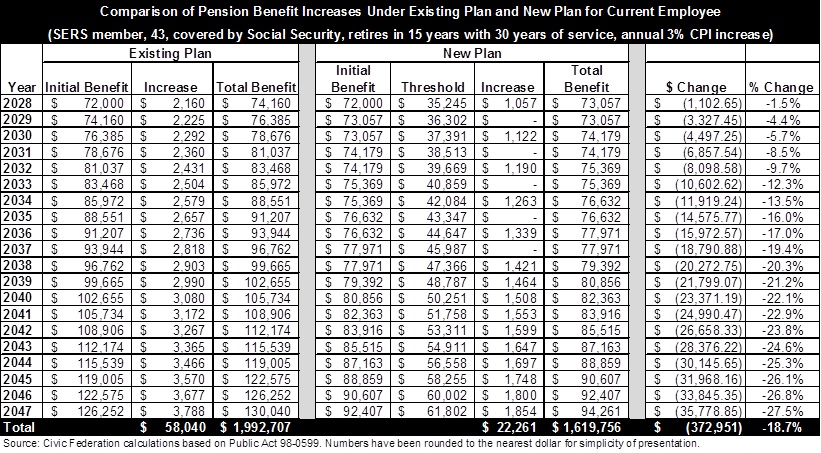 The next table compares annual benefit increases under the existing plan and new plan for a 38-year-old TRS member at two levels of initial benefits. This individual is not covered by Social Security, has worked as a public school teacher outside of Chicago for three years and will retire in 27 years with 30 years of service. Initial pension benefits in 2040 were based on the lowest and median beginning salaries for Illinois public school teachers in 2010 and TRS’ assumption that average salaries in that age range will increase by approximately 6.25% a year. The table assumes an inflation rate of 3% a year. Due to the individual’s age, five years of benefit increases must be forfeited upon retirement and the retirement age increases by two years eight months. 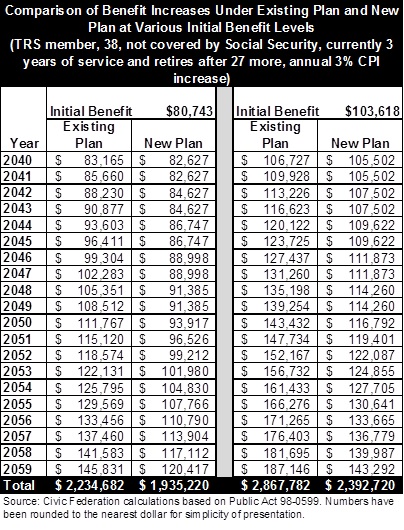 It should be noted that the higher-paid worker in this example is affected by a provision in the new law that limits the salary amount on which pension benefits may be based. This provision establishes the same pensionable salary cap for Tier 1 workers that is already in place for Tier 2 workers: $110,631 for 2014, rising annually by 3.0% or one-half of the CPI increase, whichever is less. In the example above, the inflation rate is assumed to be 3%, so the salary cap increases by 1.5% a year. The initial annual pension benefit in the example is based on the average of the four highest consecutive annual salary rates within the last 10 years of service. For the higher-paid worker, these four salary rates are above the pensionable cap, so the capped amount is used to determine the pension benefit.  (The initial pension benefit is equal to a percentage of the average salary amount; the percentage is 2.2% for each year of service, up to a maximum of 75.0%.) 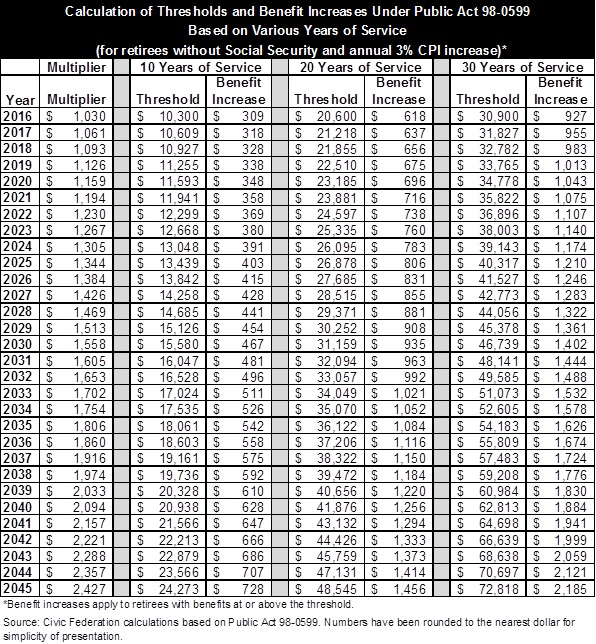