The Illinois General Assembly has approved a $36.3 billion general operating budget for the upcoming fiscal year with an acknowledged shortfall of at least $3.0 billion in revenues.

The package of approximately 20 appropriation bills and other budget-related legislation was passed during the last week in May, at the end of the legislature’s regular spring session. But amid an impasse with Governor Bruce Rauner, the General Assembly has not officially transmitted the FY2016 budget to the Governor’s Office and has returned to Springfield for an overtime session that could continue through the summer.

Governor Rauner has reportedly agreed that approximately $3 billion to $4 billion in additional revenue is needed in the budget year that begins on July 1.  However, the Governor has said new revenue will not be on the table until the legislature passes key components of his “turnaround agenda”   for the State.

The agenda includes changes in workers’ compensation, limits on damages in civil lawsuits and constitutional amendments on term limits and redrawing legislative districts. The Governor’s list also includes a freeze on property taxes, combined with measures to cut costs for local governments by limiting the scope of collective bargaining and eliminating prevailing wage requirements.

Balancing next year’s budget has been particularly challenging because FY2016 is the first full fiscal year since the partial phaseout of temporary income tax rate increases enacted in 2011. Governor Rauner’s recommended FY2016 budget, issued in February, identified “autopilot” spending needs—based on existing programs and services—of $38.2 billion, compared with available revenue of $32.0 billion, resulting in an operating deficit of $6.2 billion.

The Governor proposed to close the budget gap through pension changes and steep spending cuts. His $31.5 billion General Funds budget also allocated $500 million to pay down the State’s accumulated backlog of unpaid bills, estimated at approximately $6 billion at the end of FY2015.

As discussed in a recent Civic Federation report, the Governor’s budget was balanced on paper but actually short of billions of dollars in revenue due to unrealistic or imprudent savings projections. The pension plan was budgeted to save $2.2 billion but has not been introduced as legislation and would likely face legal challenges. A recent Illinois Supreme Court opinion that overturned previous pension changes passed by the General Assembly raised more questions about implementing the Governor’s pension plan. The Governor’s budget also counted on $655 million in savings on group health insurance through collective bargaining and included numerous other changes that required legislative action, federal approval or scrutiny from federal courts.

The General Assembly’s budget has expenditures of $36.3 billion and projected revenues of $33.0 billion, $1.0 billion above revenues in the Governor’s proposed budget. The difference comes from additional State Medicaid spending, which brings in additional reimbursements from the federal government. The Governor’s proposed budget assumes that revenue diversions from General Funds of $884 million to two other State funds to support education and human services are repealed in FY2016. The General Assembly’s budget retains the diversions but accounts for the revenues and expenditures as part of General Funds.

The table below shows the components of the legislature’s spending plan. It is based on a newsletter distributed by Illinois Senator Heather Steans, who chairs the Senate Appropriations I Committee. 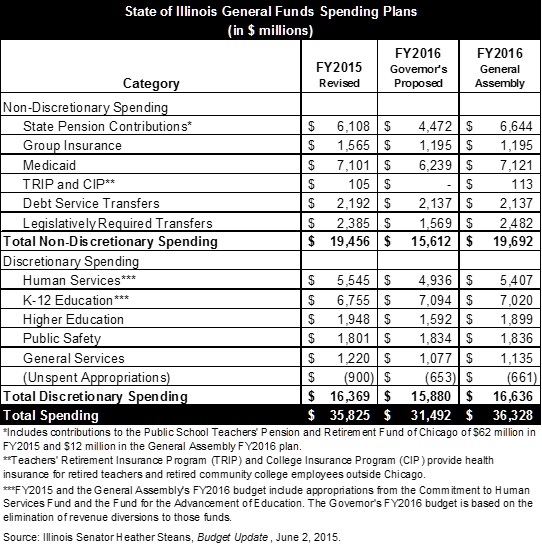 Total General Funds spending in the General Assembly’s FY2016 budget is approximately flat with FY2015, with the exception of an increase to pension contributions under existing law. The legislature’s FY2016 budget shows an increase of $536 million, or 8.8%, in pension contributions to $6.6 billion from $6.1 billion in FY2015. The proposed contributions in the Governor’s recommended budget, based on the new pension plan, are $4.5 billion. It should be noted that the legislature’s FY2016 budget includes a $12.1 million contribution to the Chicago teachers’ pension fund, while no payment to that fund is in the Governor’s budget. In addition, the General Assembly’s budget assumes a $190 million transfer from the State Pensions Fund to offset General Funds pension costs, while the Governor’s budget assumes a $150 million transfer.

The legislature’s FY2016 budget has $1.195 billion in group insurance spending, the same amount as the Governor’s plan. This is $370 million lower than the FY2015 appropriation and $655 million below the $1.85 billion identified in the Governor’s budget as required to maintain the existing group insurance program without potential State savings achieved through labor negotiations.

Medicaid spending, which covers the Medical Assistance Program at the Illinois Department of Healthcare and Family Services (HFS), shows a significant increase to $7.1 billion in the General Assembly’s budget from $6.2 billion in the Governor’s proposal. Although the General Assembly amount is approximately flat with FY2015, actual costs are understated by $600 million in both years.

In FY2015 the $600 million understatement was due to FY2014 revenues spent in the following year. If the $600 million is not funded in FY2016, HFS spending would be reduced by twice that amount because the appropriated $600 million would have been transferred outside General Funds and matched with about $600 million in federal dollars through a cycle of spending and reimbursement. Since Medicaid is an entitlement program, costs would be incurred despite the lack of funding and bills would be delayed until additional revenues become available in FY2017.

The General Assembly’s FY2016 budget restores the transfer to fund local governments’ share of State income taxes, which had been cut in half to $634 million in the Governor’s budget. It also includes funding for the Teachers’ Retirement Insurance Program (TRIP) and the College Insurance Program (CIP), which provide health insurance to retired teachers and community college employees outside Chicago. This funding was eliminated from the Governor’s budget, although it is covered by continuing appropriation.

For now each piece of budget legislation remains on hold by the General Assembly under a parliamentary move called a motion to reconsider. The bills are prevented from going to the Governor until the motions are withdrawn, decided or tabled.