The FY2022 Capital Budget Enacted By The General Assembly

Unlike the State’s annual General Funds budget, which is intended to cover only the cost of operations for the current fiscal year, capital appropriations are reauthorized over multiple years as planning, engineering and construction of capital investments commence. Since 2005 the capital budget has been proposed in a separate document from the State’s operating budget and is not part of the annual General Funds expenditures. The current multi-year capital budget was initially approved in 2019 as the Rebuild Illinois capital plan; this action provides annual appropriation authority for capital project spending to proceed. Information about the Rebuild Illinois capital plan can be found here and here.

The Government Finance Officers Association (GFOA) and the National Advisory Council on State and Local Budgeting (NACSLB) both recommend as a best practice that governments develop a capital improvement plan.[2] However, the State of Illinois capital plan does not include a comprehensive statewide capital improvement plan (CIP) that establishes priorities to balance capital needs with available resources, pairs capital projects with funding sources, helps ensure orderly repair and maintenance of capital assets and provides an estimate of the size and timing of future debt issuance. Rather, it primarily includes a list of projects. Developing a CIP is an important financial accountability measure because capital projects are costly and must be paid for over a number of years that the funds are borrowed.[3] 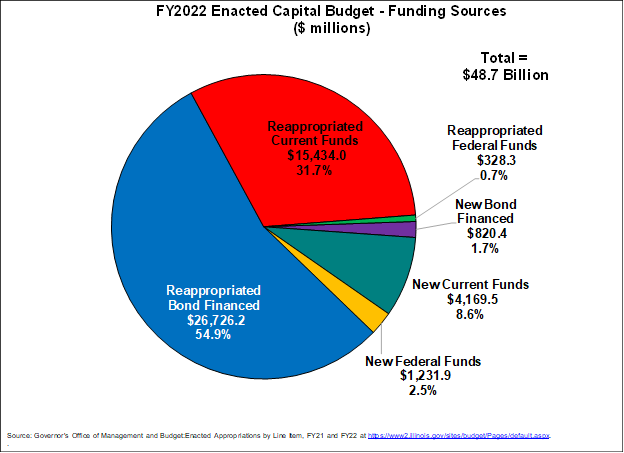 Total capital appropriations will increase by 3.7% or $1.7 billion between FY2020 and FY2022. New appropriations during that three-year period will decrease by 81.1%, or $26.7 billion. The large decrease is due to the fact that capital spending authorized in FY2019 with the Rebuild Illinois Capital Plan is reappropriated each year until it is spent; smaller amounts of new spending are added to the plan each subsequent fiscal year.  Reappropriations over that same period will increase by $28.5 billion or 203.3%. 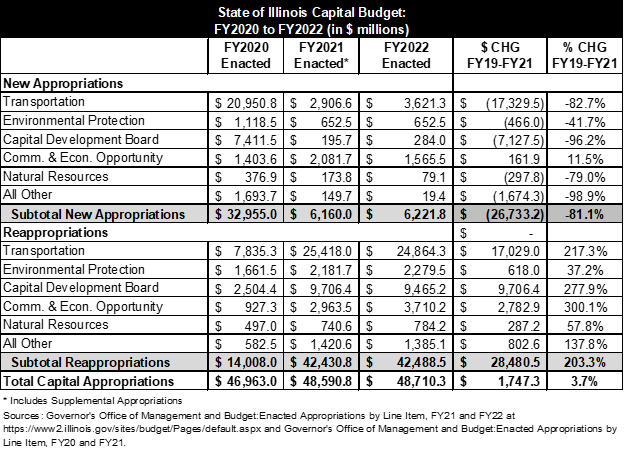 The next exhibit shows a breakdown of FY2022 capital budget spending by department and funding source. 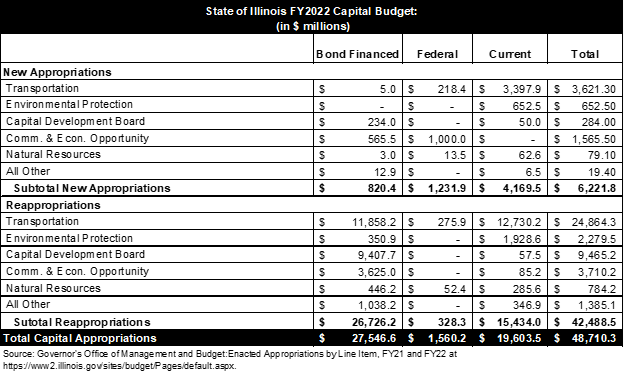 Total capital budget spending by major department for FY2022 is shown below. Funding for transportation, including statewide road and bridge construction, remains the largest portion of the State’s capital expenditures. The enacted FY2022 capital budget includes roughly $28.5 billion in total spending for the Illinois Department of Transportation, including the annual road program for ongoing surface transportation improvements (roads, bridges and mass transit). The second largest amount, or $9.7 billion, is earmarked for Capital Development Board projects. The Capital Development Board oversees the construction of new state facilities, including prisons, state parks, mental health institutions, and college and university projects.  It is also responsible for the renovation of state-owned buildings.[4] 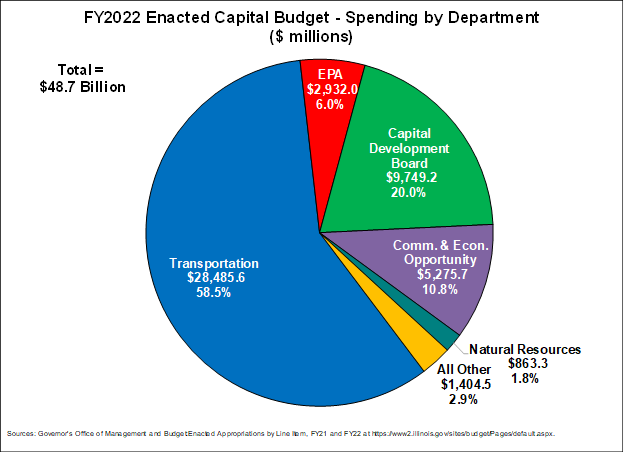 The state capital plan is supported by certain state taxes such as motor fuel taxes; non-tax state resources such as motor vehicle and operators license fees and bond issue proceeds; and federal receipts.

Much of the capital budget is supported by borrowed funds.  Information about Illinois’ historic and current debt burden can be found here and an update on the State’s recent credit rating upgrades can be found here. 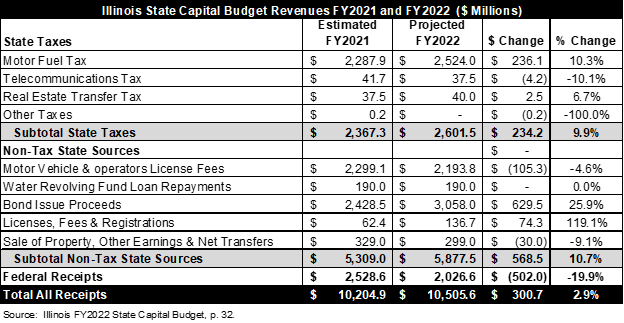 [1] Governor’s Office of Management and Budget: Enacted Appropriations by Line Item, FY21 and FY22 at https://www2.illinois.gov/sites/budget/Pages/default.aspx.

[3] One prominent example of a best practice state CIP is the Virginia Department of Transportation’s SMART SCALE. Virginia statute requires the use of an objective, weighted scoring system for each proposed transportation project that takes into account the project’s impact on congestion, safety, accessibility, economic development, the environment and transportation-efficient land use. The resulting scores guide lawmakers’ allocation of funding resources. See Code of Virginia, § 33.2-214.1; Virginia Smart Scale, http://vasmartscale.org/.

[4] Illinois Capital Development Board at https://www2.illinois.gov/cdb/about/Pages/default.aspx.

On August 24, 2021, Governor Pritzker signed legislation that will create a Higher Education Evidence-Based...

The Civic Federation hosted a series of criminal justice reform panel discussions as part of the annual conference of the Governmental Research Association in July. Here we highlight the key takeaways from discussions on two topics currently at the...