The State of Illinois received some good fiscal news this summer: two rating agencies upgraded the State’s credit ratings and a third revised its outlook to positive. The credit upgrades were the first in in two decades, reversing years of negative news.

On June 29, 2021, the State of Illinois received the first credit upgrade of this year from Moody’s Investors Services. Moody’s increased the State’s general obligation (GO) bond rating to Baa2 from Baa3 with a stable outlook. In addition, ratings on Build Illinois sales tax revenue bonds were also upgraded to Baa2 from Baa3. In the June ratings action and an update published on July 7, 2021, Moody’s cited the marked improvements in Illinois’ financial condition that had led them to issue an upgrade, including:

All was not good news, however. Moody’s warned that the State faces serious long-term financial challenges, fueled in large part by its growing unfunded pension liabilities.[2]

Moody’s summer credit updates followed two actions taken in March 2021. On March 25, 2021 Moody’s Investors Service revised its outlook for State of Illinois general obligation debt to stable from negative. At the same time it reaffirmed its Baa3 rating on those bonds. The revised outlook was also applied to other outstanding State debt. The change in outlook reflects the State’s positive fiscal performance during the COVID-19 pandemic and that federal stimulus funding support will help mitigate short and near term financial and economic pressures. The stimulus funds can assist local governments and stimulate economic growth. Moody’s warned, however, that while credit risks have lessened, the State continues to face major long-term fiscal challenges. These include the massive unfunded liabilities of Illinois’ retirement systems.[3]

Moody’s released an issuer comment on March 3, 2021 noting that Illinois’ adjusted net pension liability for its five retirement systems is set to reach approximately $317 billion. Moody’s uses a proprietary measurement of pension liabilities, which is why the number is so much higher than the actuarial figures used by the State. This figure totals approximately 37% of the State’s economic output in 2020, up from a range of 28% to 30% in recent years. Illinois pension liabilities, as measured by Moody’s, are the highest of all 50 states and the State’s liabilities for bonded debt and OPEB rank among the top in the nation. Illinois allocates about 30% of its budget to pension and debt costs and is an outlier among the states for the enormous fiscal challenges it faces to pay for the mounting pension liabilities and its limited ability to modify the benefits driving those costs.[4]

Standard and Poor’s Global Ratings upgraded Illinois general obligation debt to BBB from BBB- with a stable outlook in July 2021. This was the first state bond upgrade from S&P since July 1997.[5] S&P cited the State’s improved financial situation for its decision, including the state’s improved liquidity position; the reduction in the bill backlog; the fact that the state made its statutorily required pension payments; the flat FY2022 state budget which included $700 million in cuts as well as selected spending freezes; and the end to political gridlock in Illinois that facilitated smooth passage of the budget. S&P did note that the State continues to face long term fiscal pressures from its enormous outstanding pension liabilities.[6]

On March 9, 2021 Standard & Poor’s revised its outlook on Illinois GO and Build Illinois bonds from negative to stable. This was related to the State’s upcoming $1.3 billion GO bond issue. The rating agency stated that the change was due to a decline in the fiscal and economic uncertainty from the COVID-19 pandemic. It noted that the Pritzker administration has taken steps to ensure adequate liquidity, including accessing the Municipal Liquidity Facility; revenue collections have been stronger than anticipated; and the State has attempted to control spending with budget cuts and freezing spending.[7]

Fitch Ratings affirmed the ratings for State of Illinois general obligation bonds at BBB- and senior and junior obligation sales tax revenue bonds at BBB+ on June 23, 2021 while increasing the rating outlook from negative to positive. The outlook change reflected the State’s improved economic and fiscal condition. Fitch’s analysis mirrored that presented by the other rating agencies, citing the state’s strong revenue growth, the State’s ability to retire debt borrowed from the federal Municipal Liquidity Facility, making the statutorily required pension payment and measured use of federal stimulus aid in the budget.[8]

Fitch Ratings had assigned a BBB- rating with a negative outlook for Illinois’s $1.3 billion GO issuance debt on March 9, 2021. Fitch based its rating on an assessment of the risks the State faces due to its lack of reserves and its extensive use of budget balancing maneuvers such as deficit financing. State revenues have exceeded expectations but still are below pre-COVID-19 pandemic levels. However, at that time, the rating agency noted that approval of the federal American Rescue Plan (HR 1319, or ARP), with the possibility of approximately $7.5 billion for the State treasury would improve the fiscal situation.[9]

Illinois Bond Ratings as of August 2021

The following table summarizes the current ratings for Illinois’ General Obligation Bonds and Build Illinois Bonds and the subsequent chart shows the changes in bond ratings since 2010. 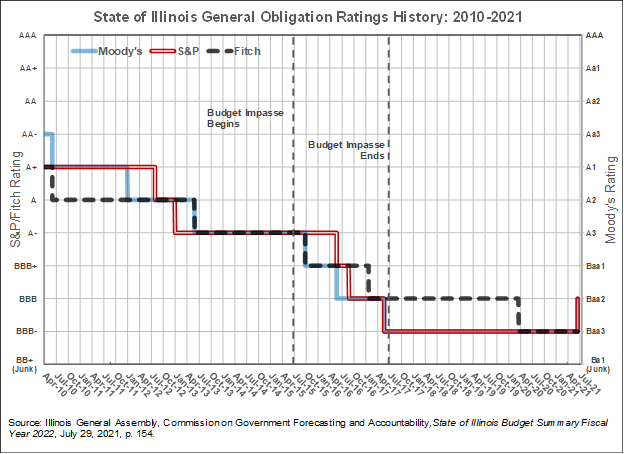