In an earlier blog post, the Civic Federation analyzed the FY2020 budget enacted by the General Assembly. At the time, the State had not yet released a summary of appropriated amounts for capital, and so the analysis offered was preliminary. When Governor Pritzker signed the capital appropriations and revenue bills, the Governor’s Office released a report allowing for more detailed analysis. 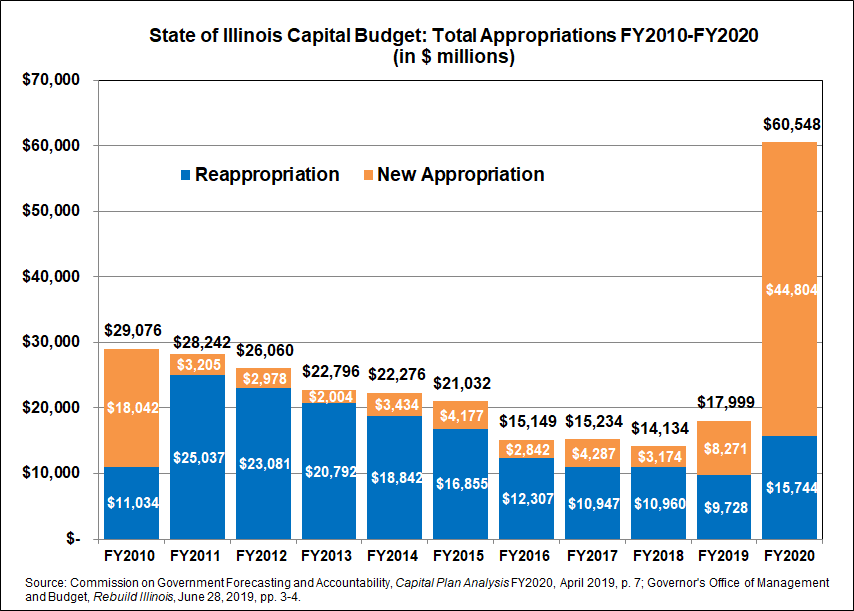 To afford the large increase in capital expenditures, the State also enacted two bills authorizing the largest expansion of revenues for capital in decades. One bill, covering transportation-related revenues that are constitutionally restricted to transportation expenditures, is projected to deliver over $1.9 billion annually once fully implemented. A primary source is a doubling of the motor fuel tax from $0.19 to $0.38 per gallon, the first increase in Illinois since 1990. The increase is projected to raise $590 million in FY2020 and will grow in subsequent years as the increase is linked to inflation. The revenues from Illinois’ current sales tax on gasoline will be shifted to transportation expenditures over seven years, eventually totaling $600 million per year. Increased taxes on other fuels and vehicle registration fees are expected to provide an additional $753 million per year.

The second bill, authorizing revenues dedicated to non-transportation, “vertical” construction projects, is expected to generate approximately $810 million annually at full implementation. About $460 million is to come from a variety of sources, including an increased tax on cigarettes, a parking garage tax, a limitation on the sales tax exemption for traded-in vehicles and new rules to collect sales tax from online retailers.

The centerpiece of the “vertical” revenue bill is a massive expansion of gambling, expected to generate $350 million annually at full implementation plus several hundred million more in upfront license fees for new and expanded gambling facilities. However, the ability of the State to implement the expansion quickly remains in doubt, as it requires implementation of new regulations and the selection of expansion sites. There is also concern that expanded gambling capacity in Illinois could exhaust demand and face stiff competition from facilities in neighboring states.

The Illinois Jobs Now! plan was also supported by an expansion of gambling in the form of video gaming, but the projected revenues took years to meet initial projections.

In addition to revenues, the report on the capital plan issued by the Govenor’s Office also provides details on planned capital expenditures. The following chart shows the breakdown of capital project types under the plan, as well as the proportion of each category that will be funded on a pay-go basis (i.e., from annually available state-source funds), by the federal government, by local sources and public-private partnerships and by issuing bonds. 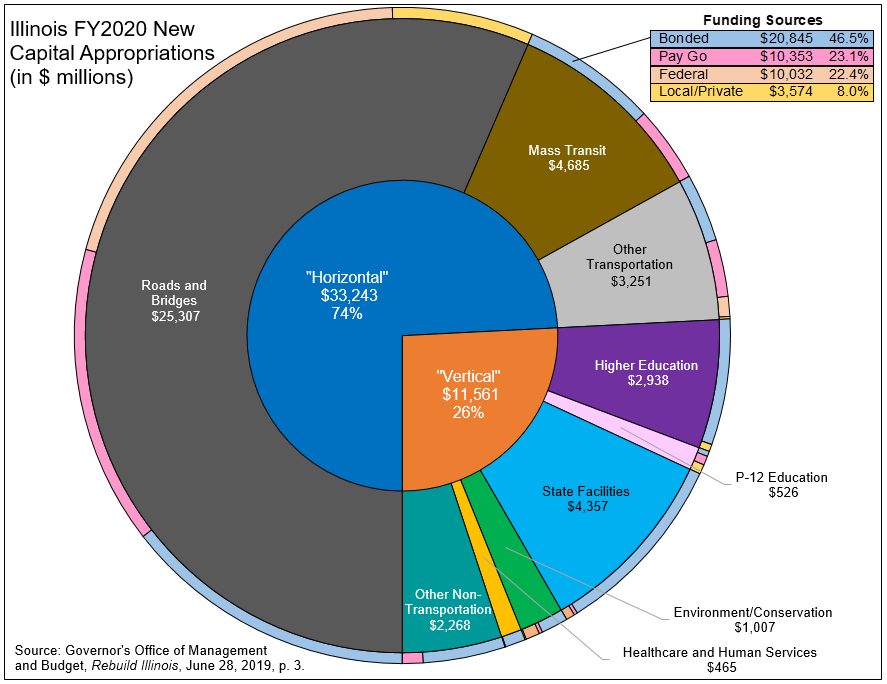 As the chart makes clear, nearly three-quarters of the Rebuild Illinois plan is allocated to “horizontal” transportation projects, with the largest share, $25.3 billion, going to roads and bridges. This category totals 56.5% of the entire capital plan and 76.1% of the transportation component. Moreover, roads and bridges will receive 90.6% of all federal funds in the capital plan.

The road and bridge spending project selection will be guided by the Illinois Department of Transportation’s five-year plan, a new revision of which will be released later this year, according to the Governor’s Office. Despite recent improvements in the planning process, the General Assembly missed an opportunity when it removed language included in earlier drafts of the legislation that would have required IDOT and the Regional Transportation Authority to adopt asset management plans and use performance-based planning.

Mass transit is a distant second in the allocation of funds, receiving $4.7 billion, or 14.1% of the amount going to transportation. Other transportation projects, including freight rail, aviation and ports, is allocated a total of $3.3 billion.

Approximately 33% of the transportation component of the plan will be funded through bond proceeds. The State and federal government will each provide about 29% in current funding. The remaining 10% is expected to be contributed by local governments and private entities.

Another quarter of the Rebuild Illinois plan appropriations are for “vertical” non-transportation spending. State facilities and higher education are the largest categories, at $4.4 billion and $2.9 billion, respectively. Local school districts, hospitals, environmental projects and various economic development projects make up the remaining $4.3 billion.

In contrast to the transportation component, few of the vertical projects will be funded on a current basis. Over 85% of the expenditures are expected to be bond-funded, backed by new revenues flowing into the State’s Capital Projects Fund. However, the underperformance of similar revenues supporting the Illinois Jobs Now! plan has for years forced the State to backfill the Capital Projects Fund with General Funds revenues in order to honor debt service requirements.

The State will need to carefully manage the pace of bond issuance and construction to avoid having the Rebuild Illinois plan repeat the mistakes of its predecessor.