The City of Chicago recently released its mid-year Annual Financial Analysis for 2016, which provides financial estimates for the City’s fiscal year ending on December 31, 2016 and a forecast for the next fiscal year. The analysis shows improvements toward reducing the budget deficit and eliminating “scoop and toss” borrowing practices.

This is the first year that the City has released the Annual Financial Analysis in an interactive online format. The analysis includes a general economic outlook, year-end estimates of revenues and expenditures, a three-year forecast, a summary of reported pension liabilities, an overview of the Tax Increment Financing (TIF) program, a summary of outstanding debt and an analysis of reserves. The City also provided a downloadable version of the financial forecast.

In its analysis, the City projects a FY2017 budget gap of $137.6 million in the Corporate Fund, the City’s general operating fund. This is the gap that the City’s FY2017 budget will need to close through some combination of efficiencies, budget cuts and revenue increases.

The chart below shows changes in the initial projected budget deficit since 2008. The preliminary budget gap grew significantly between FY2008 and FY2011, and has fallen since then by 79% from $654.7 million to $137.6 million. The City’s Annual Financial Analysis credits this decrease to actions taken in the past five budgets to increase revenue and generate savings through reduced health care costs, lease consolidations, energy efficiencies and phasing out the use of non-recurring revenue sources. 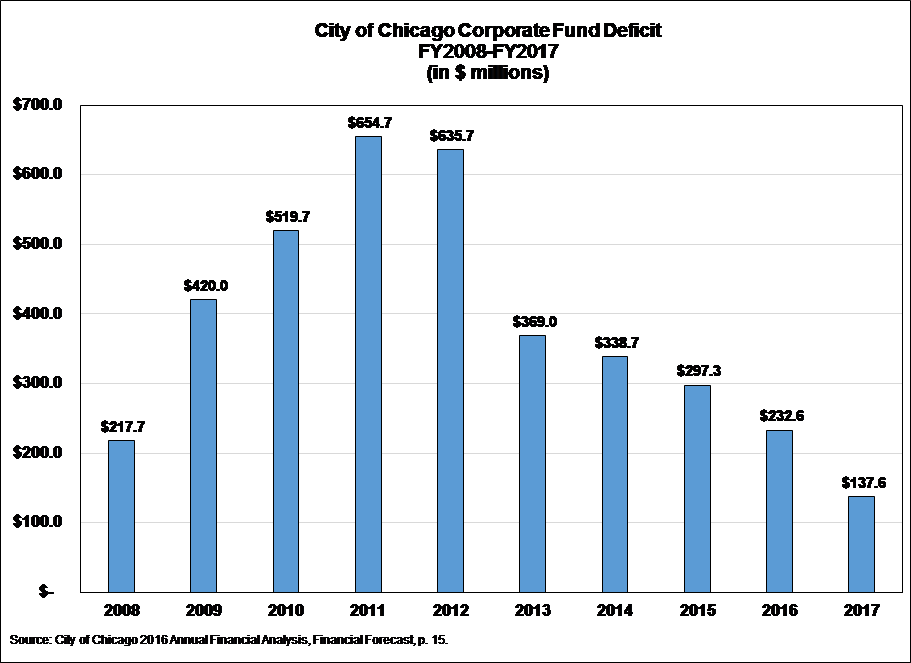 The City estimates FY2016 year-end revenues and expenditures to be slightly lower than budgeted. Total Corporate Fund resources for FY2016 are estimated to be approximately $3.57 billion, compared to budgeted resources of $3.63 billion. This 1.7% difference is largely due to lower than expected utility tax revenue and to personal property replacement tax (PPRT) revenue that the State will recoup to correct an allocation error.

Corporate Fund expenditures are estimated to be $3.55 billion, or 1.0% lower than budgeted expenditures of $3.63 billion, due to variations in fuel costs, contractual expenses and commodity and material expenses.

While the City has made progress in reducing the FY2017 budget gap to $137.6 million and identifying funding sources to meet obligations for its four pension funds, long-term fiscal challenges remain.  In an effort to eliminate the unsustainable practice of “scoop and toss,” the City has increased debt service payments from the Corporate Fund for FY2016 and FY2017.  Additionally, the City faces nearly $23 billion in outstanding long-term debt and a $44 billion total pension liability as calculated according to reporting requirements set by the Governmental Accounting Standards Board. Overcoming these financial challenges will require ongoing fiscal discipline and the cooperation of State leaders.