City Continues “Scoop and Toss” Borrowing to Balance the Budget

For the third year in a row, the budget proposed by Mayor Rahm Emanuel for the City of Chicago relies on the use of refunding bonds to pay for principal owed in the coming year rather than making payments from operating resources.

Although the details of the refunding bonds are not included in the Mayor’s proposed FY2015 budget, the City’s operating costs for the coming year are reduced by $120.8 million in principal debt payments that were refunded in March 2014 and will not be repaid until FY2044. The refunding bonds were sold with an annual interest rate of 6.3% and structured so that no principal payments are made for 30 years. Extending the life of the debt leads to a total interest cost of $228.8 million for the refunding bonds. If the City had not refunded the debt, the FY2015 budget would have had to include this principal payment as part of its total debt service payment.

If the $120.8 million of refunded principal owed in FY2015 was included in the budget, the total deficit in FY2015 would increase from $297.3 million to $418.1 million. As detailed in the Civic Federation’s analysis of the FY2015 proposed budget, the Mayor proposes closing the $297.3 million budget gap with reasonable structural changes including targeted tax and fee increases, vacancy eliminations and other operational efficiencies. However, the Federation’s report raises concerns about the reliance on borrowing for operations through the refunding bonds and urges the City to develop a strategy for ending the practice.

Similar to the FY2015 budget, the FY2013 and FY2014 operating budgets benefited from a total of $133.8 million in refunded principal that was due to be paid out of operating expenses in those years but was part of refunding bonds issued in May 2012. The additional interest for the FY2014 and FY2013 refunding totals $218.0 million.

By extending the life of bonds that were due to be repaid over the last three budget years for an additional 30 years, the City reaped savings that reduced its operating deficits by a total of $254.6 million but at a cost of $446.8 million in additional interest that will be paid through FY2044. The City will also experience a spike in debt service owed at the end of the refunding when the entire principal amounts are due to be repaid in full.

The following chart shows the principal that was owed in FY2013 through FY2015 by the City but that was refunded and paid for using refunding bond proceeds and will now not be repaid until FY2044. The chart also shows the original bond series that were refunded and the amount of interest that will be paid over the life of the extended debt. 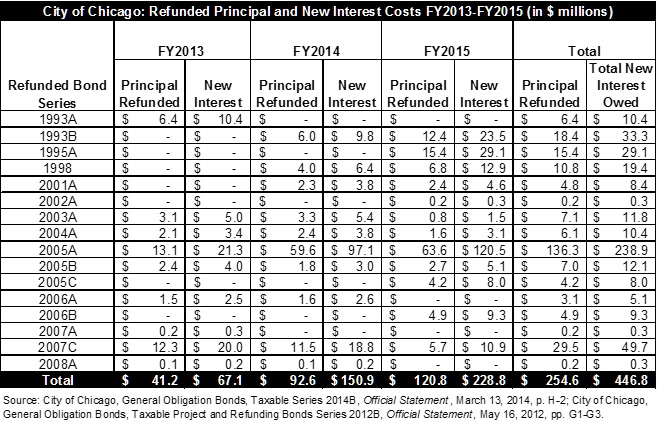 As shown in the table above, the bonds refunded to reduce the annual debt service owed by the city date back to 1993, which extends the life of those bonds from 20 to 50 years. The refunding of bonds and backloading of principal payments for 30 years greatly increases the cost of the original investments and utilizes an extraordinarily expensive bond repayment structure.

The City also refunded $14.0 million of principal payments due from FY2016 through FY2027 with the Taxable Series 2014B Bonds. The refunding increases the interest rate being paid on all of these bonds to 6.3% through 2044. The original interest rates ranged from 5.0% to 5.37%.

The practice of “scoop and toss” refunding differs from the City’s direct borrowing for operations in previous years. In the past, the City directly used bond proceeds to fund operations, increasing corporate fund resources. The refunding procedure reduces total debt service owed, thus freeing up additional operating resources that would have otherwise been used to make the principal payments.

Another use of the Taxable Series 2014B Bonds was to repay short-term commercial loans used to cover operating expenses in FY2014. The City retired $53.2 million of its commercial paper, which are short-term loans typically repaid in the same fiscal year or within 12 months of borrowing, as part of the taxable bonds sold in March 2014. At the same interest rate of 6.3% and with no principal repayment until 2044, the interest cost associated with repayment of the commercial loans using long-term refunding bonds totals $100.8 million.

For more information about the City of Chicago’s proposed FY2015 budget and citations for the data used in this blog, see the Civic Federation’s full analysis available here.