Public Act 98-0641, the City of Chicago’s pension reform bill, originally called for an increase in property taxes to help fund the Municipal Employees’ Annuity and Benefit Fund (MEABF) and the Laborers’ and Retirement Board Employees’ Annuity and Benefit Fund (LABF) of Chicago. However, in response to a lack of support for the property tax provision of the bill, it was revised to remove the property tax language. As a result, the City of Chicago had to find an alternative source of revenue to provide much needed additional funding.

The graph below displays the City of Chicago emergency communications surcharge revenue from 2004 to 2013 and the year-end estimate for 2014. The 2014 year-end estimate includes an additional $10.0 million in revenue that will be generated during the last quarter of the fiscal year. Because the landline and wireless line rates will go into effect on September 1, 2014 and the prepaid rate will go into effect on October 1, 2014, it is projected that almost $40.0 million in additional revenue will be collected in FY2015.[3] The graph below clearly depicts the 2008 rate increase, followed by a steady decline in revenues for the following five years. The decline in revenue is partly due to the fact that as cell phones have become more popular, residents have begun disconnecting their landlines instead of maintaining both a landline and a cellular phone line.[4] 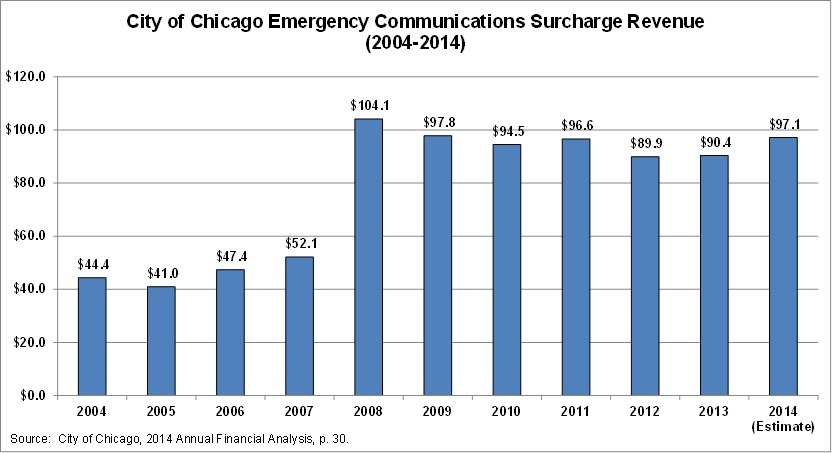 Although emergency telecommunication revenues are expected to increase in the coming years due to the increased surcharge, the City of Chicago has recognized that additional revenue sources will be needed to help fund its fiscal obligations moving forward. Public Act 98-0641 requires significant annual increases to the City of Chicago’s contribution to the Municipal and Laborers’ Funds through 2021, when it will begin making actuarially-required contributions to reach 90% funded by the end of 2055.