The Civic Federation and IIFS blogs have written extensively about reductions to assumed rates of return on investment by State and some local public pension plans over the last several years. These changes are part of a nationwide trend, influenced partly by the low interest rate environment and by a larger debate over whether pension plans should use a risk-free rate of return to discount liabilities or the expected rate of return on investment, as used by most public pension plans. In this blog we use data from the Public Plans Database from the Center for Retirement Research at Boston College and the Public Fund Survey, sponsored by the National Association of State Retirement Administrators (NASRA), to explore nationwide trends in rate of return assumptions.

The following chart shows how many of the 126 funds surveyed have used different rates of return since 2001. The only Chicago area fund included in this survey is the Chicago Teachers’ Pension Fund, which lowered its expected rate of return for FY2013 to 7.75% from 8.0%. 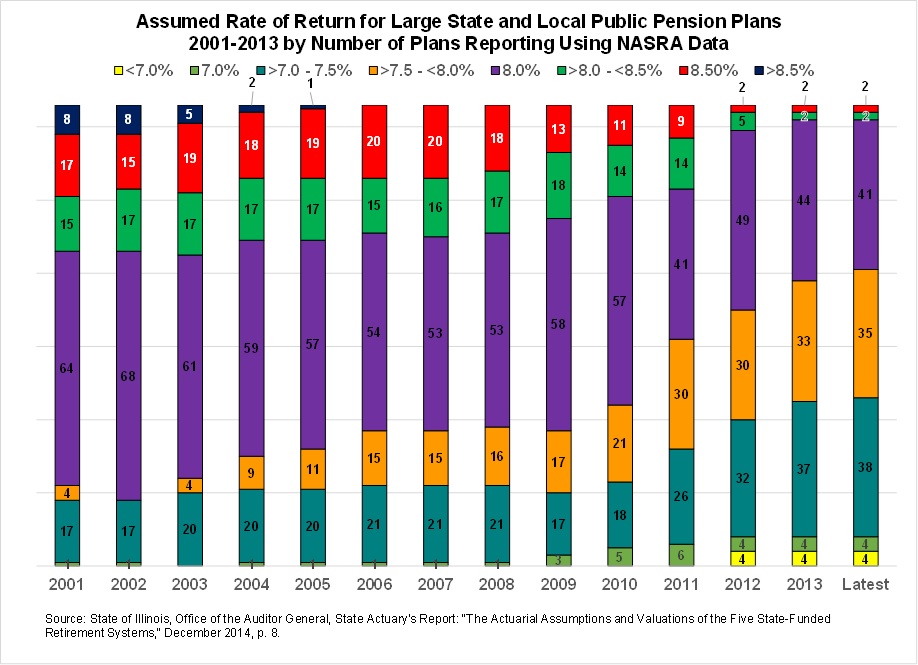 Another, somewhat larger, database of 150 state and local pension funds produced by the Center for Retirement Research at Boston College shows similar trends. The Chicago Teachers’ Pension Fund, the Chicago Municipal and Police Funds and the Cook County Fund are included in the Public Plans Database. Because data was not available for all funds for every year in this database, the following chart shows the percentage of funds using different assumptions, not the number of funds as in the previous chart. The number of funds reducing their rate of return assumptions lowered the median rate assumption in 2011 to 7.75% from the previous 8.0% median.

The following chart shows the changes made to rate of return assumptions in FY2011-FY2013 by the 10 local pension funds the Civic Federation studies. Eight of the 10 funds are now at or below the median investment rate of return for both national datasets of 7.75%. The Chicago Fire Fund at 8.0% and the Chicago Transit Authority Fund at 8.25% are above current median levels. The Office of the Illinois State Auditor General, as part of its annual review of the CTA Pension Fund, noted that while the CTA Fund reduced its expected rate of return for FY2013, it “remains at the upper end of investment return assumptions used by other plans.” The Auditor General recommends the Plan annually review the reasonableness of the rate of return assumption rather than wait several years for the next actuarial experience study. 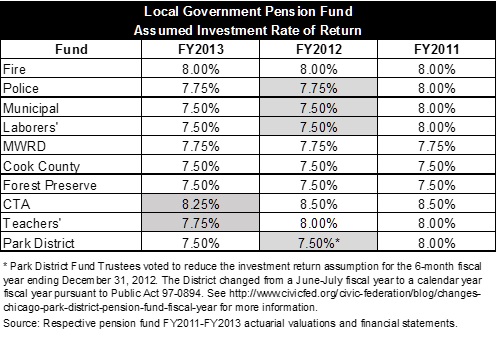 To read more about the impact of changes to rate of return assumptions, read the following blog posts: