Four large local government pension funds in the Chicago area reduced their expected investment rates of return for fiscal year 2012. While intended to make the funds’ actuarial assumptions more realistic, these decisions will also have the effect of increasing the funds’ liabilities and reducing their funded ratios. The State of Illinois’ five retirement funds also recently reduced their expected investment rates of return and the Chicago Teachers’ Pension Fund trustees voted last month to reduce that fund’s expected rate of return for fiscal year 2013.

The assumed rate of return on investment, also called the discount rate, is used to calculate the present value of the future obligations of the systems. This is the amount that needs to be invested as of a specific date to provide benefit payments as they come due. Reducing the rate increases the present value of future commitments to employees and retirees and results in higher liabilities and lower funded ratios. To read more about the discount rate, read the Civic Federation’s Status of Local Pension Funding reports.

Three of the four funds are City of Chicago funds: the Police, Municipal and Laborers’ funds. The fourth is the Chicago Park District fund. The following chart shows the assumed rates of return in FY2011 and FY2012 for the ten local government pension funds the Civic Federation studies. 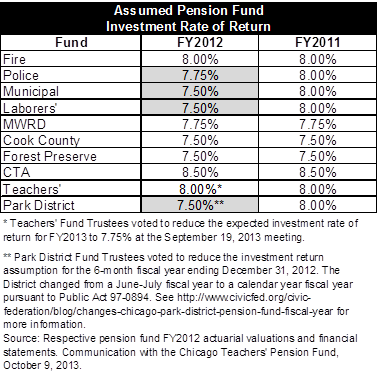 Actuarial assumptions and methods can change for various reasons, including demographic trend changes, analysis of recent plan experiences or new industry standards such as Governmental Accounting Standards Board (GASB) requirements. It is considered standard practice for actuaries to review and reassess assumptions, such as mortality rates, salary levels and expected rates of return every five years. The Laborers’ fund and Park District fund changed investment return and other assumptions as part of larger actuarial experience studies.

The following paragraphs summarize the impact of assumption changes on the unfunded liabilities and funded ratios of the four funds in FY2012,[1] as described in the actuarial valuations of the funds.