The State of Illinois’ largest pension fund recently revised several key assumptions that affect the fund’s financial condition and the contributions that must be made by the State under Illinois law. As discussed here, the Board of Trustees of the Teachers’ Retirement System (TRS) approved the changes at a meeting on September 21, 2012.

The following table shows the impact of the changes on required State contributions and on TRS’ total liability and funded ratio as of June 30, 2011. 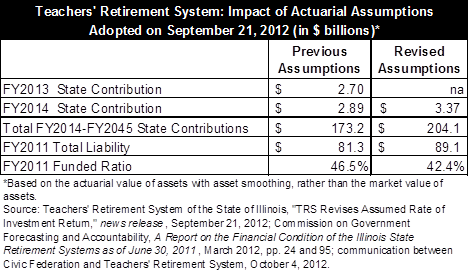 TRS, which covers Illinois teachers outside of the City of Chicago, had 386,837 members at the end of FY2011. TRS’ Board revised the plan’s assumptions after an actuarial experience review required every five years for each retirement system by the Illinois Pension Code. Following similar reviews, the State’s other four pension systems previously lowered their assumed rates of return to between 7.0% and 7.75%.

The expected rate of return is used to calculate the present value of the future obligations of the systems. This is the amount needed to be invested as of a specific date to provide benefit payments as they come due. Reducing the rate increases the present value of future commitments to employees and retirees and results in higher statutorily required State contributions.

The Board decided to lower the rate to 8%, with some trustees citing concerns that the State would not make the full contribution required at an expected rate of 7.75%. An audio recording of the September 21, 2012 Board meeting can be found here. The Board also voted to reconsider its actuarial assumptions, including the assumed rate of return, in three years instead of five due to the volatility of the world economy.

Illinois makes contributions to TRS and its other four retirement systems under a funding law (Public Act 88-0593) that began in FY1996. After a 15-year phase-in period, the law requires the State to contribute a level percentage of payroll sufficient to bring the retirement systems’ funded ratios to 90% by FY2045.The funding plan and subsequently enacted changes deferred a large portion of the required contributions to later years. The funding plan does not conform to reporting standards of the Governmental Accounting Standards Board. For most of the funding period, the law has required State contributions that were insufficient to keep the unfunded liability from growing.

Each retirement system has been required to certify the contribution needed for the next fiscal year by November 15 so the Governor can include it in his recommended budget. The State’s actual required State contribution to TRS in FY2014 is expected to be higher than the projected amount due to investment losses in FY2012 that are not reflected in the projection.

As discussed here, the TRS Board in March 2012 approved a resolution stating that it could no longer rely on the State to follow the law for funding its retirement systems and that sweeping changes were needed to sustain the pension funds. The Board reached that conclusion after analyzing how much of the State’s future revenues will have to go toward pension costs under current law.

Although TRS has not taken a position on pending pension legislation, Executive Director Richard Ingram said recently that reductions in automatic annual benefit increases of 3% a year appear inevitable. Roughly a quarter of TRS payments are for these annual increases. Annual benefit increases were already reduced for employees hired on or after January 1, 2011 under pension legislation enacted in 2010.