Cook County has accounted for all $429 million in Coronavirus Relief Fund (CRF) funding the County received through the federal CARES Act in 2020, according to a report presented by Cook County finance officials to the Cook County Board of Commissioners in January. The County received relief funds from the U.S. Treasury in April 2020 that could be used to cover eligible COVID-19-related expenses, which had to be spent by the end of the year in order to keep the full funding amount. Cook County received $428.6 million of the total $4.9 billion allocated for the entire State of Illinois. Cook County’s total allocation was $898.7 million, based on its share of 40.6% of the total state population. The City of Chicago received $470 million of that amount, with the remainder, $429 million, going to Cook County government. A portion of Cook County’s allocation was then distributed to units of local government in Cook County excluding the City of Chicago, as described below. The money could only be used for pandemic-related costs incurred from March 1 to December 30, 2020 and could not be used to offset lost revenue due to the coronavirus.

A report with a second update on CRF expenditures presented at the February 25 Cook County Board of Directors meeting showed final allocations according to the following breakdown: 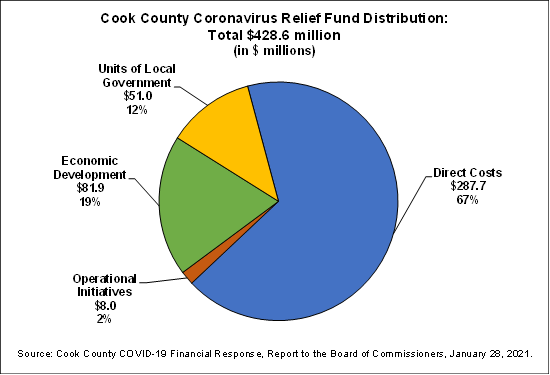 While not all of the funds have been expended yet, the County says approximately 100% have been either expended or obligated. The update provided to the Board of Commissioners at its February 25 meeting showed that $367.9 million of the CRF funds have been spent and $60.5 million (14%) have been obligated, meaning committed per an agreement, contract or purchase for service. The only funds left unobligated are $200,000 within the $51.0 million allocation to local governments. The majority of the obligated but unexpended funds—approximately $50.2 million—are earmarked to cover additional labor costs. A large portion of the CRF funding was allocated to cover labor costs because employees substantially dedicated to mitigating the spread or responding to the public health crisis qualified for funding.

Cook County distributed a total of $51.0 million to units of local governments including suburban municipalities, townships, special districts (library, fire and park districts), the Forest Preserve District of Cook County and the Metropolitan Water Reclamation District. Allocations to suburban municipalities were determined based on an equitable funding distribution model developed by Cook County and the Chicago Metropolitan Agency for Planning, as described in this white paper. The model considered several weighted factors including: immediate needs of the municipality to respond to the pandemic, municipal population, municipal median income, and municipal public health statistics. A list of the allocations made to municipalities are available by allocation size or in alphabetical order.

Separate allocations made to townships and fire protection districts were based on the County’s assessment of population and area served by those entities and the County’s understanding of their initial direct and operational COVID-19 response needs. The County made flat allocations of $5,000 to suburban Library Districts and Park Districts.

In addition to CARES Act funding, the federal government has been negotiating another coronavirus relief package, which state and local governments hope will provide funding to offset revenue losses due to the pandemic.

How Will CARES Act Funding Be Divided Among Illinois and its Local Governments?