On June 26, 2020, Cook County Board President Toni Preckwinkle issued a preliminary budget forecast for fiscal year 2021, which begins December 1, 2020 and ends November 30, 2021. The report provides end-of-year estimates for the current 2020 fiscal year and a forecast for the 2021 fiscal year in the County’s operating funds: the General Fund, which accounts for administrative and public safety operations; and Health Fund, which accounts for the health and hospitals system run by the County. The economic impact of COVID-19 has caused significant declines in revenue for Cook County, resulting in large budget deficits in FY2020 and continuing in FY2021.

In the General Fund, Cook County is projecting a $219.7 million deficit in FY2020. The deficit is mainly the result of lost revenue due to the economic impact of the COVID-19 stay-at-home order. Total General Fund revenue is expected to end the year $297.2 million, or 15.5%, below the FY2020 adopted budget. The largest loss of revenue, $258.0 million, is expected to come from taxes other than property taxes, many of which are economically sensitive, such as sales tax, amusement tax and hotel tax (more detail on non-property tax revenue is discussed further below). A $27.2 million loss, or 13.5%, is expected for fee revenue. In particular, fees collected by the Clerk of the Circuit Court and the Cook County Sheriff are expected to decline significantly due to closures of most court operations during the COVID-19 shutdown. Other revenue including reimbursements from the State of Illinois and investment income are also expected to decline from the adopted budget.

General Fund expenditures are projected to be $77.5 million below budgeted expenditures. While some expenses have increased, including a $43.5 million increase in overtime costs in the Department of Corrections related to containing COVID-19 in the jail and $1.2 million for supplies and materials to address COVID-19, the County expects to reduce costs by $68.6 million by delaying hiring and by $13.0 million by delaying planned projects. The expenditure reduction will partially offset the revenue loss in the General Fund.

To address the $297.2 million revenue shortfall in the General Fund, the County plans to cut costs by $94.5 million through departmental holdbacks (expenditure decreases) and use of $102.0 million of federal CARES Act funding for eligible COVID-19-related expenses such as public safety personnel. Covering the remaining $100.7 million will still need to be addressed between now and the end of the fiscal year.

Medicaid revenue from both Cook County’s own managed care plan, CountyCare, and payments from other managed care organizations for healthcare services provided at Cook County facilities, is projected to be $141.1 million, or 6.7%, higher than budgeted. CountyCare revenue is expected to more than cover expenses in FY2020, while other health system revenues are expected to fall short of expenses.

Other Health Fund revenue including reimbursements from Medicare and private payors are expected to fall short of the budgeted levels. Medicare patient revenue is down by $28.1 million, or 16.0%. Private payor patient fee revenue is down by $53 million, or 35%, due in part to a suspension of services during the COVID-19 stay-at-home order. Revenue received from federal CARES Act funding in the amount of $127.6 million will help offset some of the revenue loss.

Health Fund expenditures are projected to increase by $383.0 million in FY2020 due to increases in managed care claims from higher CountyCare membership ($288.0 million), professional services ($49.9 million), an increase in salaries from hiring ($30.7 million) and overtime costs related to addressing COVID-19 ($13.7 million).

To address the $60.6 million shortfall in the Health Fund, Cook County Health plans to cut costs by $5 million through the elimination of 70 positions, most of which were vacant, and reducing contractual costs by $30 million. The remaining budget gap of $26 million will need to be closed through additional measures by the end of the year. 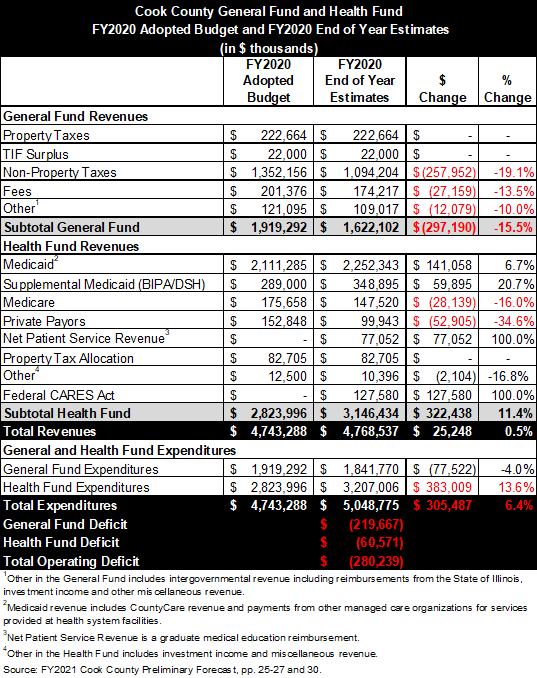 The table below presents the end-of-year estimates for non-property taxes compared to the originally anticipated revenue levels in the FY2020 adopted budget. These revenue sources are highly dependent on economic activity and have been severely impacted by COVID-19. As shown in the table, all of the non-property tax revenue sources are projected to end the year lower than budgeted in FY2020 except the firearms and ammunition tax and cannabis tax. Sales tax revenue is expected to be $110.0 million, or 13%, below the initial estimate. The amusement tax is projected to fall short by 84%, or $33.5 million. The amusement tax has been particularly impacted due to the cancellation of summer sporting events in addition to many other events. The hotel tax is expected to decline by $20.7 million from budget, or 60%. The parking lot and garage tax is projected to be $25.6 million or 53% less than budgeted. Gas tax revenue declined significantly in April during the stay-at-home order, resulting in a projected loss of $18.1 million, or 19%. Various gambling taxes have also experienced substantial losses. Altogether these projected revenue losses total $258.0 million. 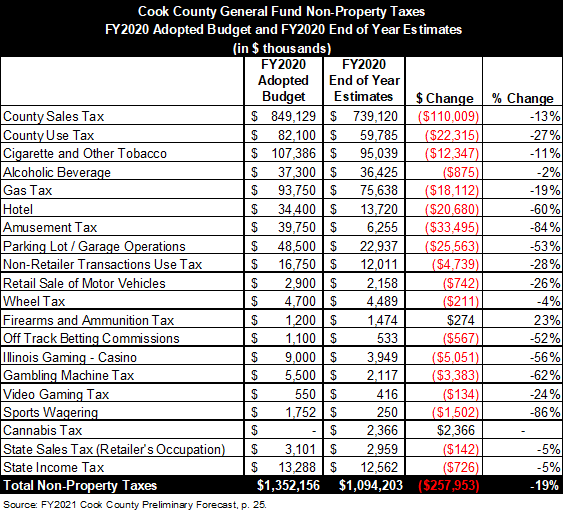 Revenue losses related to COVID-19 are anticipated to continue in the 2021 fiscal year. Cook County is projecting a $222.2 million budget deficit in the General Fund and a $187.4 million deficit in the Health Fund in FY2021, with a total operating deficit of $409.5 million.

In addition to non-property taxes, fee revenue is also expected to decline from the FY2020 adopted budget by $22.6 million or 11.2%. Primarily, the Clerk of the Circuit Court’s revenues are projected to be $11.3 million, or 15% below the prior year budget, and the County Treasurer’s revenues are projected to be down by $10.0 million, or 25%. These projections are contingent on the Illinois Governor’s Restore Illinois Plan, based on the current assumption that the Phase 4 of COVID-19 recovery in Illinois lasts until May 2021, and Phase 5 begins in June 2021. This would allow the County to collect revenue from summer events such as sports and concerts. The County has also prepared additional revenue projections for potential worst-case and best-case scenarios related to the COVID-19 economic recovery.[3]

Two sources of revenue that were not projected to be available in FY2020 will bring in new revenue in FY2020—the cannabis tax and online sales tax. As of July 1, 2020, a 3% County tax will apply to cannabis sales in Cook County. This is projected to generate $13.9 million in revenue in FY2021. Additionally, Cook County’s sales tax will apply to online sales beginning January 1, 2021. This is expected to generate an additional $53.7 million in FY2021.

General Fund expenditures are projected to increase from the FY2020 budget by $92.9 million, or 4.8%, due to increases in employee healthcare rates, payroll increases, an increase in overtime in the public safety offices and increased contractual services and supplies costs related to COVID-19.

The projected revenue increases in the Health Fund are driven primarily by a $341.9 million increase in managed care revenue including CountyCare and a $7.4 million increase in Medicare revenue due to an increase in membership of the Medicare Managed Care Plan. The Health Fund also expects Net Patient Service Revenue of $77.3 million, which is an additional Medicaid reimbursement from the State for the provision of graduate medical education. Revenue from private payors is projected to decrease by $21.8 million from the FY2020 budget due to continuing reductions in patient volume due to COVID-19.

The County will need to identify measures to close these projected deficits in the General and Health Funds before releasing the recommended FY2021 budget in October. 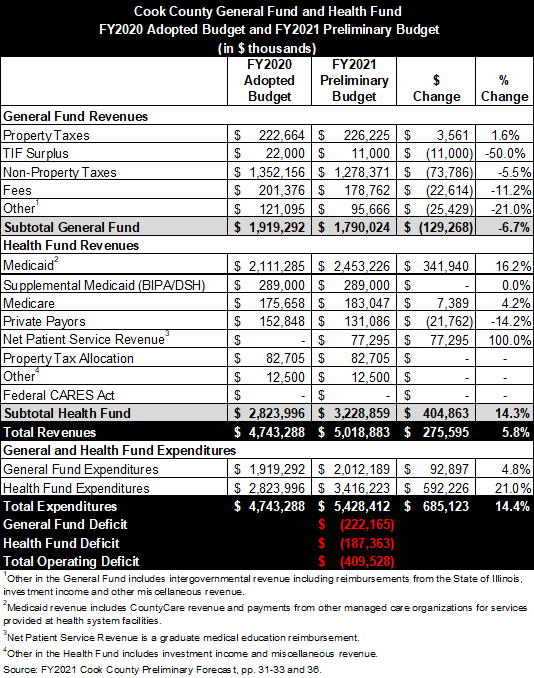 A public hearing on the preliminary forecast was held on July 16, 2020. The Cook County Board will also hold departmental budget hearings in July. President Preckwinkle’s final budget recommendation will be presented on October 8, 2020. Members of the public can submit budget questions through the County website.