How Will CARES Act Funding Be Divided Among Illinois and its Local Governments?

The $2.2 trillion economic relief legislation passed by Congress in late March contains significant new funding for States and large local governments. Exactly how the money will be split appears to have caused considerable confusion in Illinois and elsewhere.

The Coronavirus Aid, Relief and Economic Security (CARES) Act provides a total of $150 billion in federal aid through the Coronavirus Relief Fund. After setting aside $11 billion for tribal governments, U.S. territories and the District of Columbia, the remaining $139 billion is divided among states and local governments based on population. The money can only be used to cover new expenses from March 1 to December 30 of this year to combat COVID-19.

Illinois is expected to receive a total allocation of $4.9 billion. Governor JB Pritzker has said the State itself will keep $2.7 billion, with $2.2 billion going to large local governments, and has called on Congress to provide more aid to address revenue shortfalls. In other communications, the State of Illinois has said at least $2.7 billion will go to the state. Two national fiscal policy research organizations, the Tax Foundation and the Center for Budget and Policy Priorities, arrived at numbers of $3.5 billion for Illinois and $1.4 billion for local governments.

The Civic Federation’s estimate matches those of the two national groups, for reasons explained in this blog post. The Treasury Department’s explanation of the distribution methodology is here, but it does not explain specifically how the $2.2 billion is distributed. It explains how the local governments apply and how to divide funds between overlapping local jurisdictions. The Civic Federation is basing its interpretation on the language within the legislation itself.

Illinois also has one city, Chicago, with a population of more than 500,000. Cook County’s allocation of $898.7 million is reduced by Chicago’s proportionate share of the State’s estimated population, according to the Treasury guidelines. Chicago has estimated its share at $470 million, with the remainder of about $429 million allocated to the rest of Cook County. 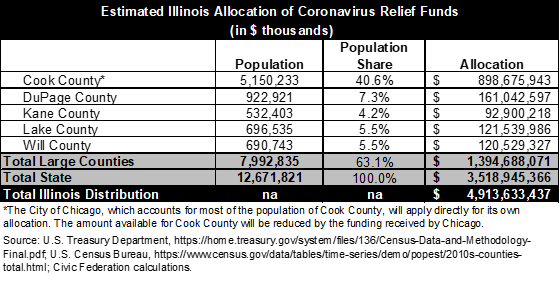 At his daily press briefing on the virus on April 15, the Governor for the first time announced his administration’s estimate of the crisis-related shortfall in State revenues and noted that CARES Act funding may not be used to fill the gap. For FY2020, which ends on June 30, a shortfall of $2.7 billion is expected, including $1 billion from the three-month delay in income tax payments. For the next fiscal year, the administration predicts a budget gap of $6.2 billion—or $7.4 billion if voters do not approve a proposed constitutional amendment to permit graduated income taxes.

To close the budget gap in FY2020, the Governor said he plans to cut costs, borrow $700 million from accounts outside of the general operating funds and sell $1.2 billion in constitutionally permitted short-term debt. For FY2021, where the budget gap partly reflects repayment of the proposed borrowing, the Governor urged the federal government to provide additional assistance.