Like most states that levy income taxes, Illinois has followed the federal government in extending the deadline for filing and paying income taxes due for 2019 by three months. The extension—from April 15 to July 15—is intended to provide relief to individuals and businesses hit by the economic fallout from the COVID-19 pandemic, but it is also expected to further strain Illinois’ ability to pay its bills.

The Illinois Comptroller’s Office has estimated that more than $1 billion in State revenues could be delayed due to the extension. The Comptroller’s website warns vendors and social service agencies to expect longer payment delays. As of April 13, the State’s backlog of unpaid bills stood at an estimated $8.0 billion.

In addition to the immediate cash flow problems, the new tax deadline could create a budget gap in the current fiscal year. Income tax revenue that was budgeted to arrive in fiscal year 2020, which ends on June 30, may now be delayed until FY2021, which starts on July 1.

The broader fiscal impact of the virus crisis will unfold over months or years, as the State faces steep reductions in income and sales tax collections due to the emergency economic shutdown. Governor JB Pritzker’s administration has not yet issued a projection of revenue losses related to the pandemic. However, as discussed here, the General Assembly’s economic research arm estimated the general operating revenue impact of a decline as much as 20% over several years.

It is unclear how much financial assistance Illinois will receive in total from federal pandemic response legislation and when it will arrive. The Federal Reserve on April 9 announced the creation of a $500 million, short-term lending program for states and large local governments. Proceeds could be used to help manage the cash flow impact of income tax payment extensions, pay revenue shortfalls due to the economic downturn and make debt service payments. However, Illinois has a number of constitutional restrictions on its short-term borrowing. In addition, borrowing rates will be based on governments’ credit ratings, and Illinois has the lowest credit ratings of any state.

The Internal Revenue Service announced the federal deadline extension for tax payments due on March 21, but Governor Pritzker was initially reluctant to take a similar step. At his daily press briefing on the virus on March 22, the Governor said he was considering the move but was concerned about the State’s cash flow. The decision to align the Illinois tax deadline with the federal government was announced on March 25.

Income taxes account for about 56% of Illinois’ General Funds revenues. Before the pandemic, individual income taxes were projected at $20.1 billion in FY2020 and corporate income taxes at $2.5 billion. April—the month in which both final and estimated tax payments are made—has historically been the strongest month for income tax collections. Estimated taxes are quarterly payments made by all corporations and by individuals with income not subject to tax withholding. Individual and corporate income tax deposits in April represented between 13.8% and 19.1% of total annual General Funds income tax deposits from FY2015 to FY2019. 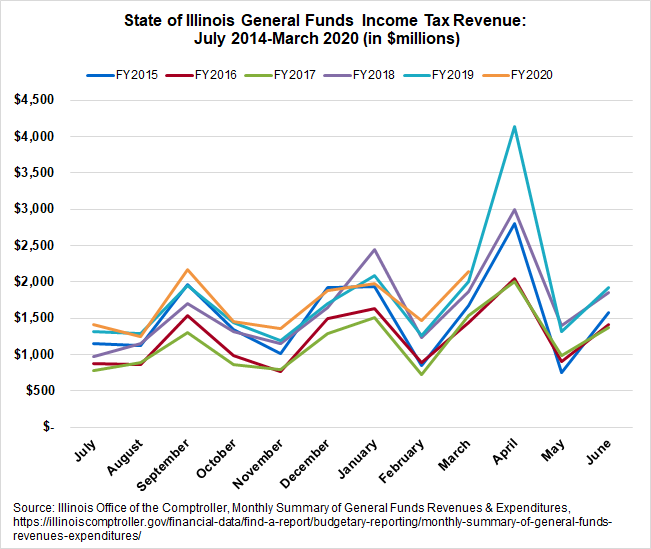 The spike in FY2019 was related to what has been called the April surprise. That unexpected surge in income tax revenues in Illinois and other states has been linked to strong non-wage income, such as capital gains and dividends, as well as taxpayer decisions related to federal tax law changes.

The other year-to-year fluctuations shown in the chart stem mainly from tax rate changes. Illinois’ income tax rates were temporarily increased to 5.0% for individuals and 7.0% for corporations in January 2011, but they rolled back to 3.75% and 5.25% in January 2015. After a two-year budget impasse, the rates were raised to their current levels: 4.95% for individuals and 7.0% for corporations. Additionally, while the number of accounts included in General Funds grew from four to seven in FY2018, certain income tax revenues that had been channeled through general operating accounts were deposited directly into another State fund beginning in that year.

The Illinois Department of Revenue has not yet estimated the impact of an income tax payment delay. An agency spokesman noted that many taxpayers are expected to pay on time despite the extension. As of April 9, 64% of individual taxpayers had already filed, compared with 70% at the same time last year.

As of April 2, all but one of the 41 states with broad-based income taxes had extended their income tax deadlines, according to the Federation of Tax Administrators. Most of the states have laws that automatically tie to the federal deadlines. In the remaining state, New Jersey, the legislature on April 13 is expected to vote on a measure to delay payments until July 15 and extend the State’s fiscal year by three months, from June 30 through September.

The federal government and most of the other states have also delayed the first and second estimated tax payments for 2020, usually due on April 15 and June 15, until July 15. Illinois and several other states have not extended the deadlines for estimated tax payments. However, estimated payments for 2020 could be lower than initially projected due to the recent stock market plunge and other economic reverses.

Illinois Comptroller Susana Mendoza has said she will use all available budget and statutory tools to manage the State’s cash flow situation. The Comptroller’s Office plans to prioritize payments to hospitals and doctors while continuing to make critical payments for debt service, State payrolls, elementary and secondary education, social and human service providers and pension payments.

Based on recent history and the State’s lack of budgetary reserves, the most likely outcome of the change in the income tax deadline is an increase in the State’s unpaid bills. The backlog reached $16.7 billion in November 2017 following the budget deadlock of FY2016 and FY2017, when State leaders failed to reach agreement on restoring higher income tax rates. The State issued $6 billion of bonds to pay down the backlog.

In FY2018 the Comptroller was authorized to borrow up to $1.2 billion from other State funds to bolster General Funds and a related account. About $1.0 billion of such borrowing was outstanding as of the end of January. The Comptroller borrowed $105 million from various other funds in March to expedite payments to hospitals in advance of a growth in virus-related cases.

The State Treasurer may also borrow from other State funds to invest up to $2 billion with the Comptroller to pay down bills. The Treasurer’s investments carry lower interest rates than the State’s steep statutory interest penalties for past-due bills.

So far, the federal crisis-related assistance provided to states by Congress has not addressed revenue shortfalls. The Coronavirus Aid, Relief and Economic Security (CARES) Act, passed at the end of March, provides $150 billion for state and large local governments, but the funding is restricted to paying for new COVID-19 costs, rather than offsetting declines in economically sensitive revenues. Another relief bill that would provide more aid to states has been stalled in Congress.