The new report, from the Illinois General Assembly’s Commission on Government Forecasting and Accountability (COGFA), based its projections on declines in tax revenues experienced during recent recessions. The conclusion: Illinois’ general operating revenues could fall between almost $2 billion and more than $8 billion over several years, depending on the severity of the virus-triggered recession. Before the crisis, COGFA had estimated that General Funds revenue would total $40.6 billion in fiscal year 2021, which begins on July 1, 2020.

It comes as no surprise that Illinois, with its overwhelming pension debt, huge backlog of unpaid bills and virtually nonexistent rainy day fund, is poorly prepared for an economic downturn of any kind. Many economists are now expecting a recession in 2020 and some believe the financial disruption relating to the coronavirus disease could be unprecedented in recent history, given recent job losses, restrictions on consumer movement and the falloff in stock and bond markets.

The negative outlook for Illinois and other states represents an abrupt reversal from just a few months ago. As discussed here, Governor J.B. Pritzker’s proposed budget for FY2021, which was issued in February 2020, included higher individual income and sales tax revenues than his office’s five-year budget forecast in October 2019. The budget numbers were based on a somewhat more favorable economic outlook by the forecasting firm IHS Markit, with lower near-term recession risk than was projected last fall.

At his daily press briefing on the virus on March 24, the Governor acknowledged that “there’s no doubt that any (revenue) estimates that were made even two months ago would be not useful at this point. I don’t think anybody expected where we would be today.” He said his staff is working to come up with new numbers, but he did not provide any estimates.

COGFA, the General Assembly’s economic research arm, said in the new report that “the extent of the impact of a potential recession in Illinois due to this pandemic cannot be accurately determined at this time due to the numerous unknowns that persist.” However, the report added that a review of past recessions can provide guidelines on the impact on Illinois tax revenues.

COGFA provided the projections related to the coronavirus in its annual three-year budget forecast. The forecast itself does not account for any impact from the virus. But the risk of a recession caused by the coronavirus is at the top of the list of threats to the forecast.

Looking at past recessions, COGFA’s report said the downturn between FY2001 and FY2003 saw overall General Funds tax revenues fall by a combined $1.3 billion, or 5.5%, from $24.1 billion to $22.8 billion. The three main State-source revenues—individual income taxes, sales taxes and corporate income taxes—declined by a similar 5.7% during the period. A recession of like magnitude would be expected to reduce total General Funds revenue by close to $2 billion over the next several years, according to COGFA.

Next COGFA examined the Great Recession that began in December 2007 and officially ended in June 2009. Between FY2008 and FY2010, overall General Funds revenues fell by $2.6 billion, or 8.7%, from $29.7 billion to $27.1 billion. The major State-source revenues declined by a combined $3.2 billion, or 16.6%, from $19.4 billion to $16.2 billion, but the effect was mitigated by federal stimulus funding through the American Recovery and Reinvestment Act. Due to recent income tax increases beginning in 2011, these revenues have grown from about 60% of the total to nearly 78%, according to COGFA. As a result, a recession similar to the Great Recession is expected to result in a decrease of about 11% in total receipts over several years, or a revenue loss of about $4.5 billion.

The following chart, based on COGFA’s numbers, shows the impact of economic downturns on the State’s General Funds revenues, by major category, since FY2000. The numbers do not include short-term borrowing and interfund transfers. The revenue declines in FY2016 and FY2017 are related to a temporary decrease in income tax rates and are not due to economic conditions. 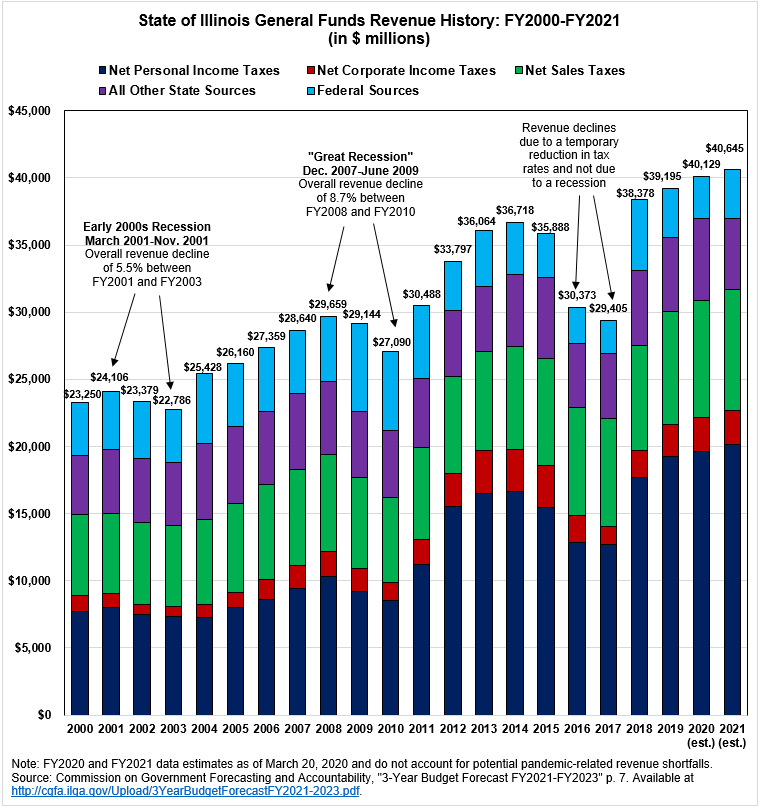 COGFA also attempted to estimate the impact of a “COVID-19 Recession,” which is assumed to have an even larger impact on near-term revenues than the Great Recession. In this scenario, total General Funds revenues were projected to drop by 20%, or more than $8 billion, over several years.

It should be noted that revenues are only one side of the State’s budget equation. While revenues are expected to decline during an economic downturn, residents’ need for government-supported healthcare and social services is expected to grow due to loss of jobs and health insurance. In addition, pension costs are expected to increase because of reduced investment returns. States’ short-term fiscal options are limited, which is why Illinois and other states typically seek federal assistance in times of economic crisis. Because federal policy is difficult to predict, COGFA’s projections do not assume additional crisis-related federal revenue.