Will the State of Illinois Run Out of Money?

With Illinois operating without a budget for more than three months, concerns have arisen about whether the State is going to run out of money.

The simple answer is no—at least not in the way that running out of money is typically understood.

Despite the lack of a budget since fiscal year 2016 began on July 1, 2015, money is still going into the State’s checking accounts. However, this revenue can only be used if there are budgetary appropriations or other spending authority.

The following chart shows monthly revenue in the State’s general operating accounts from July 2013 through September 2015. 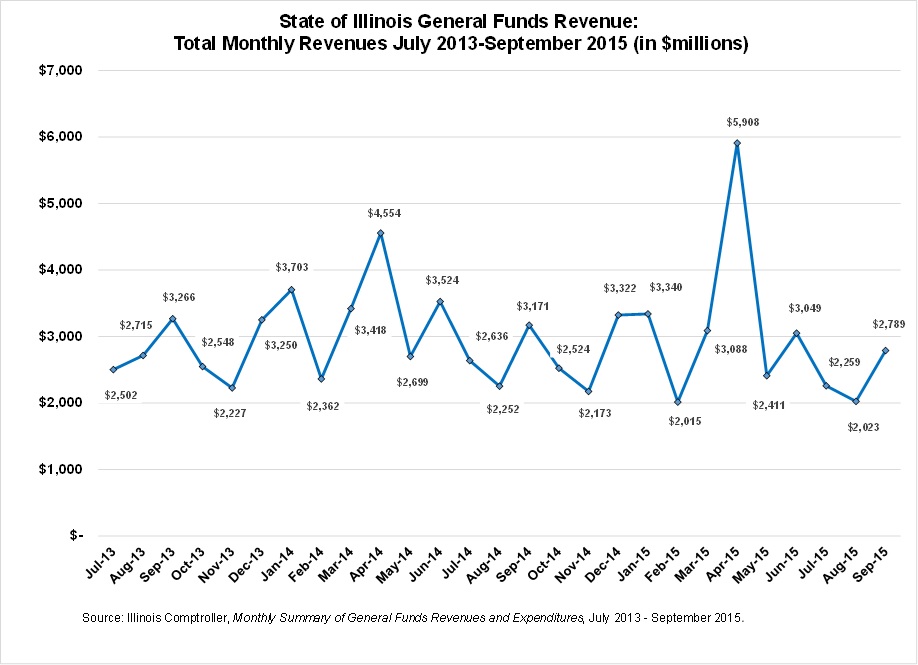 As shown in the chart above, the State’s revenue collections can vary greatly from month to month. November is typically one of the months with the lowest tax receipts. Annually, April is the month with the highest amount of revenue collected by the State due to final income tax payments.  As previously discussed here, General Funds revenue increased dramatically in April 2015 after legislation was approved authorizing the transfer of more than $1.0 billion from the State’s Special Funds to complete the FY2015 budget.

For all of FY2016, the legislature’s Commission on Government Forecasting and Accountability has projected General Funds revenues of about $32.1 billion, down from $36.3 billion in FY2015.

As discussed here, even without a budget the State is obligated to make numerous FY2016 payments due to State law and court orders. In addition, although Governor Bruce Rauner and the Illinois General Assembly have not reached agreement on most of the FY2016 budget, the Governor did sign an appropriation bill for elementary and secondary education.

During the first three months of FY2016, General Funds expenditures totaled $7.5 billion, according to the Illinois Comptroller’s website. For the entire year, Senate Democrats have estimated that the State is obligated to spend $34.5 billion from General Funds, or 89.1% of expected annual expenses of $38.7 billion. The main areas not receiving payments are higher education and human services programs that are not covered by Medicaid.

At a press conference on October 14, Comptroller Leslie Geisler Munger said November pension payments of $560 million—and possibly December payments—will be delayed because the State will not have enough cash on hand to make all payments required by State law and court orders. The Comptroller said that the delay in the State’s contributions will not affect benefit checks to retirees and that the retirement systems will be paid in full by the end of FY2016.

The Teachers’ Retirement System (TRS), the State’s largest pension fund with assets of about $46 billion, said in a statement that the November payment for TRS is about $312 million. Although the delayed payment will not affect benefit checks, it is possible that TRS might have to sell more assets than normal to deal with its own cash flow needs, a spokesman said.

This is not the first time in recent years that State pension contributions have been delayed. In FY2011 the retirement systems received little to no money until the State sold bonds in February 2011 to pay for its required contributions. As a result, the retirement systems sold more assets than normal in order to pay for benefits, which led to the loss of investment income.

The State’s backlog of unpaid bills and other payables currently stands at $6.9 billion and is expected to reach about $8.5 billion by the end of calendar year 2015, according to the Comptroller’s Office. The backlog is likely to decline next spring due to the inflow of income tax revenues, the Comptroller said at the press conference.