A drop in Illinois’ income tax rates—and uncertainty about the implementation of pension changes—could cause the State’s backlog of unpaid bills to grow to $9.9 billion by the end of the 2016 budget year, according to a new forecast by Governor Pat Quinn’s office.

Along with the decline in income tax revenues, the three-year projection for the State’s general operating budget through FY2018 assumes an increase in expenditures, mainly for pension contributions and for health insurance for employees and retirees. By the end of that year, the bill backlog grows to $21.3 billion, up from $3.9 billion at the end of FY2014.

A Civic Federation report in March 2014 projected a bill backlog of $18.9 billion at the end of FY2018. That assumed pension changes would take effect in FY2016, significantly reducing required State contributions, but implementation has been stalled by legal challenges.

Since 2011 the Governor’s Office of Management and Budget (GOMB) has been required by State law to submit a three-year budget projection to the Illinois General Assembly in early January of each year.  The law also requires a report on the State’s long-term economic and fiscal policy objectives, but GOMB officials said they do not plan to issue the report this year due to an imminent change in administration. Governor Quinn lost his re-election bid in November 2014; Governor-elect Bruce Rauner takes office on January 12.

In his budget proposal for FY2015, Governor Quinn recommended that the higher income tax rates be kept in place. The legislature did not take up this proposal, and the enacted budget for FY2015 reflects a decline in tax rates midway through the fiscal year. The new Governor is expected to clarify his position on income tax rates when he unveils his FY2016 budget, which will take place on February 18 unless the date is changed by the General Assembly.

The following table summarizes GOMB’s projection for the General Funds budget from FY2016 through FY2018. The projection also includes updated results for FY2014 and FY2015. 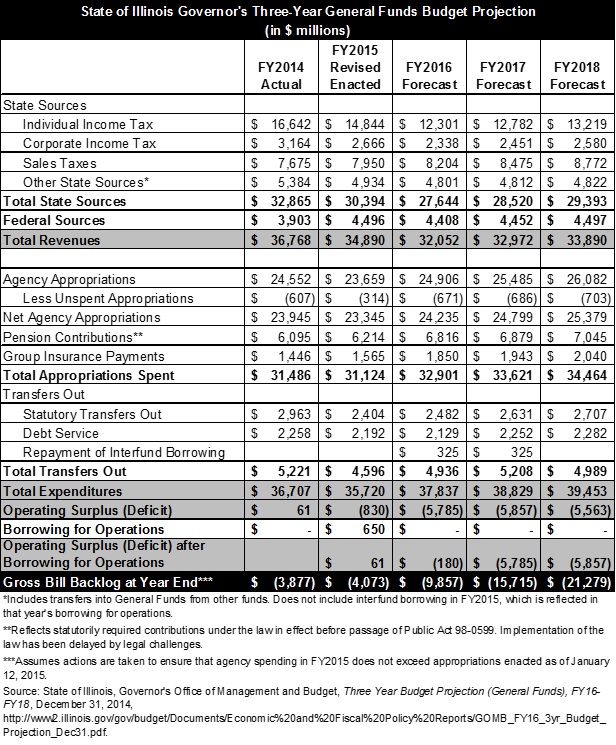 The projection shows a decrease of $5.2 billion, or 26.1%, in income tax revenues from $19.8 billion in FY2014 to $14.6 billion in FY2016, the first full year of the lower rates. Total General Funds revenues are projected to fall by $4.7 billion in the same period, helped somewhat by projections of increased sales tax collections and higher federal revenues (representing reimbursements on State Medicaid spending).

Group insurance contributions for State workers and retirees, which consist largely of health insurance contributions, are projected to increase by $285 million to $1.9 billion in FY2016 from $1.6 billion in FY2015. GOMB officials said that $140 million of this increase reflects reimbursements owed to State retirees as a result of an Illinois Supreme Court decision that overturned a law requiring all retirees to pay health insurance premiums.

Increases in agency expenditures from FY2016 though FY2018 are intended to keep services at current levels, according to GOMB. Net agency appropriations spent—after subtracting unspent appropriations—increase by $290 million, or 1.2%, to $24.2 billion in FY2016 from $23.9 billion in FY2014.

The FY2015 budget was balanced by borrowing $650 million from other State funds, a practice known as interfund borrowing. Even with these resources, GOMB estimated that FY2015 appropriations were approximately $753 million below actual costs. In the projection for FY2015, it is assumed that actions are taken to ensure that agency spending does not exceed enacted appropriations.

The projection shows annual operating deficits of more than $5.5 billion from FY2016 through FY2018. It should be noted that the Illinois Constitution and State law require that the Governor propose and the General Assembly pass budgets that are balanced, with proposed spending (or appropriations in the case of the legislature) not exceeding estimated available resources. These requirements have been interpreted to refer to the annual operating budget but not to the accumulated deficit from prior years. The accumulated deficit represents unpaid bills and transfers that must be paid from the next year’s revenues.