State of Illinois Pension Contributions to Increase Significantly in FY2018

Recent decisions by two of the largest State of Illinois retirement systems are expected to result in significant increases to statutorily required pension contributions in the upcoming budget year. This blog post discusses the decisions and their potential impact on the State budget.

The Boards of Trustees of the Teachers’ Retirement System (TRS) and the State Employees’ Retirement System (SERS) recently voted to revise assumptions that affect the estimated value of pension obligations. Since pension benefits are paid far out in the future, actuaries must make assumptions about factors such as salary increases, life expectancy and how long employees will stay on the job.

A key assumption involves the discount rate, the interest rate used to estimate the present value of future benefit payments. Reducing the rate increases the estimated present value because more money must be set aside now to pay future benefits. This present value, known as the actuarial liability, is compared with the value of pension assets to determine the funded status of pension plans and the level of State contributions. Public pension funds generally use the long-term assumed rate of investment return to discount liabilities for funding purposes.

On August 26, 2016, TRS’ Board reduced the assumed rate of return to 7.0 percent from 7.5%. TRS, which covers public school teachers outside the City of Chicago, is the largest of the State’s five retirement systems.

The TRS Board cited a recommendation by its actuary based on expectations that returns on all types of investments, as well as the general inflation rate, will decline over the next several years. Although TRS’ 30-year return for the fiscal year ended June 30, 2016 was 8.2%, the return for FY2016 was only 0.1%.

TRS was not alone in posting low annual returns in FY2016. As of the beginning of August, no major public pension fund in the U.S. had reported FY2016 returns of more than 1.5%. For many funds, it was the worst year for investment results since the Great Recession.

The SERS Board lowered its investment return assumption to 7.0% from 7.25% on July 13, based on its actuary’s recommendation. SERS also raised its projections about future life expectancy and changed other demographic assumptions.

The moves by TRS and SERS were in line with a recommendation by the State Actuary in December 2015 that those two funds, as well as the State Universities Retirement System (SURS), consider reducing the investment return assumption. SURS has no plans to lower the rate from the current 7.25%, according to a spokesperson.

As discussed here, many public pension funds have reduced their return assumptions in recent years. TRS has lowered the rate three times since 2012, when it stood at 8.5%. More than half of the 127 large public pension funds surveyed by the National Association of State Retirement Administrators have reduced their return assumption since FY2008, and the average rate as of February 2016 was 7.62%.

State contributions are determined by a 50-year funding plan that began in FY1996. After a 15-year phase-in period, the law requires the State to contribute a level percentage of payroll sufficient to bring the retirement systems’ funded ratios to 90% by FY2045.The funding plan deferred a large portion of required contributions to later years and has allowed the unfunded liability to keep growing. Illinois was tied with Kentucky for the worst funded pensions in a recent study by the Pew Charitable Trusts.

The following table summarizes the financial condition of Illinois’ retirement systems as of the end of FY2015, the latest information available. The total unfunded liability was $112.9 billion, based on the smoothed value of assets, and the funded ratio was 40.9%. Since FY2009, State law has required that the actuarial value of assets be based on asset smoothing, in which unexpected gains or losses in any fiscal year are recognized over five fiscal years. 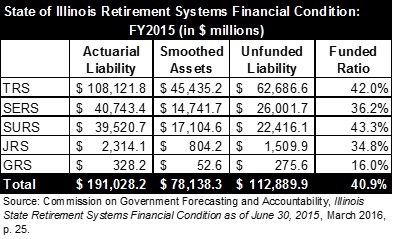 It is not known exactly how the recent assumption changes will affect the FY2016 unfunded liability and proposed FY2018 contributions. Those calculations will not be available until the FY2016 valuations, which will also take into account factors such as the most recent annual investment returns.

SERS’ actuary reported that the previously projected FY2018 State contribution, based on the FY2015 valuation, would have increased by $323.2 million, or 15.7%, to $2.4 billion from $2.1 billion due to the actuarial changes. For SERS, the assumed increase in life expectancy, rather than the decrease in the discount rate, was the main reason for the higher contribution.

The expected contribution increases come as Illinois is struggling with a financial crisis that has left the State with a growing pile of unpaid bills and without a complete budget since FY2015. Despite the new pressures on State finances, Moody’s Investors Service praised TRS’ decision because it will lead to additional funding. However, the credit rating agency said the State’s annual contributions to TRS would have to increase by an additional $1.5 billion to keep the unfunded liability from growing.

It should be noted that many economists do not consider the long-term assumed rate of investment return to be an appropriate discount rate for pension liabilities. As explained here, the debate does not center on whether future returns will be higher or lower than the chosen investment rate.

Instead, economists argue that the discount rate should reflect the risk of the liability rather than the risk of the assets. Since public pension benefits appear to be virtually guaranteed—particularly in light of recent rulings by the Illinois Supreme Court—the idea is that pension obligations should be discounted at a much lower risk-free rate, such as the U.S. Treasury bond rate. This kind of rate would produce much higher liabilities and require far greater State contributions.

At the TRS Board meeting on August 26, Executive Director Richard Ingram said he supported a further reduction in the rate assumption next year due to the global decline in investment returns. However, he also indicated that he would not favor a rate anywhere near as low as a risk-free rate.

In 2012 the Governmental Accounting Standards Board (GASB) issued new accounting and financial reporting standards for public pension plans and for governments, Statements 67 and 68. For GASB’s position on discount rates for pension obligations, see this Civic Federation blog post. The GASB standards do not apply to pension funding.