How much of the State of Illinois’ transportation funding has been diverted for other uses?

The issue has attracted new attention because of a proposed amendment to the Illinois Constitution that would prohibit the State and its local governments from using transportation-related taxes and fees for other purposes. After winning nearly unanimous support from the General Assembly last spring, the proposal will be on the ballot in the November 8 general election.

The measure is widely referred to as the lockbox amendment because it will wall off funding for one purpose: transportation. Supporters call it the Safe Roads Amendment because they say it is needed to improve the quality of roads and highways and prevent accidents.

The issue of transportation diversions is important because of Illinois’ ongoing financial crisis, which has left the State with a growing pile of unpaid bills and without a complete budget since FY2015. Limiting access to transportation-related revenues such as motor fuel taxes and motorist user fees could put additional strain on the State’s general operating resources, consisting mainly of income taxes and sales taxes, and similarly affect local governments.

According to proponents, $6.8 billion of revenue was diverted from State transportation funds between FY2002 and FY2015 due to waste and mismanagement in Springfield. The figure has been used in a State-wide public education campaign by proponents and cited in many published reports.

The $6.8 billion number comes from the Transportation for Illinois Coalition, an organization including roadbuilders, trade unions and business groups that has pushed the amendment. The chart below, based on data from the Coalition, shows the breakdown of the diversions by year, with amounts ranging from $172 million in FY2014 to $783 million in FY2004. 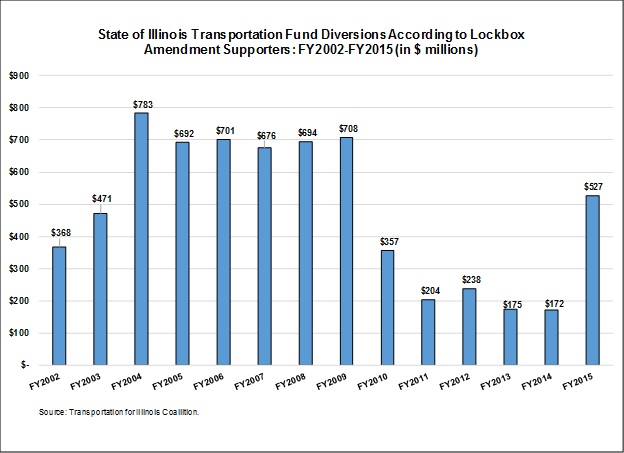 Supporters have said the $6.8 billion represents money that State officials have raided or swept from transportation funds. Fund sweeps involve the transfer of excess money to the State’s main operating account from other funds to help reduce budget deficits. The State has also used chargebacks, which are transfers intended to defray State operating costs.

However, the major transportation funds—the Road Fund, State Construction Account Fund and Motor Fuel Tax Fund—have been largely exempted from these kinds of special transfers to the General Revenue Fund. Since the State began using these transfers in FY2003, the three funds have only been affected twice—in FY2004 and FY2015—according to the General Assembly’s Commission on Government Forecasting and Accountability (COGFA).

As shown in the chart below, based on data from COGFA, sweeps and chargebacks from the three funds total $519.5 million. Of that total, $350 million occurred in FY2015 and were part of a record $1.3 billion in total sweeps. Those massive transfers were used to close a budget gap due to the reduction in Illinois income tax rates on January 1, 2015.

Amendment supporters use a much broader definition of diversion than just sweeps and chargebacks to arrive at the total of $6.8 billion, as shown in spreadsheets from FY2002-FY2012 and FY2012-FY2016 provided by the Transportation for Illinois Coalition.

From FY2002 through FY2009, the reported diversions included payments from the Road Fund for salaries and other operating costs of the Secretary of State and State Police. These payments averaged about $215 million per year during the eight-year period and ended after FY2009, when the costs were shifted to the General Revenue Fund in connection with the Illinois Jobs Now! capital program.

Some of the spending classified as diversions in earlier years is not included in later years because different individuals were responsible for the calculations. For example, the earlier computations included State group health insurance payments for employees whose salaries were paid from the Road Fund. Those payments averaged about $130 million per year. Amendment advocates say group health payments from the Road Fund for employees with transportation-related jobs are no longer considered diversions and would be permitted under the proposed amendment.

In the newer calculations, diversions average about $169 million per year, excluding the sweeps in FY2015. These include motorist user fees collected by the Illinois Secretary of State for vehicle registrations, driver’s licenses, certificates of title and other services and deposited into the General Revenue Fund. The diversions also include the facilities management fee paid by the Illinois Department of Transportation (IDOT) to the Department of Central Management Services and a transfer from the Motor Fuel Tax Fund to the Vehicle Inspection Fund to pay for emissions testing by the Illinois Environmental Protection Agency.

The Illinois Economic Policy Institute, which studies the construction industry, determined that many of the non-direct expenditures in the Auditor General’s study were for activities needed to keep construction projects going. A May 2014 report by the organization found $2.6 billion in Road Fund diversions from FY2002 through FY2012, or 11.5% of the fund’s total expenditures during the period. According to the Institute’s calculations, Road Fund diversions had dropped to $43.6 million, or 2.4% of total Road Fund spending, by FY2012.