Aided by an unexpected surge in income tax collections in April 2013, the State of Illinois’ backlog of unpaid bills is projected to decline to roughly $5.8 billion at the end of FY2014.

As shown in the table below and discussed in a new report by the Civic Federation’s Institute for Illinois’ Fiscal Sustainability, that would represent a decrease of nearly $3.0 billion from an estimated $8.8 billion at the end of FY2012. Despite the improvement, General Funds payables and other liabilities are expected to remain a significant fiscal burden at approximately 16% of projected FY2014 revenues of $35.7 billion. 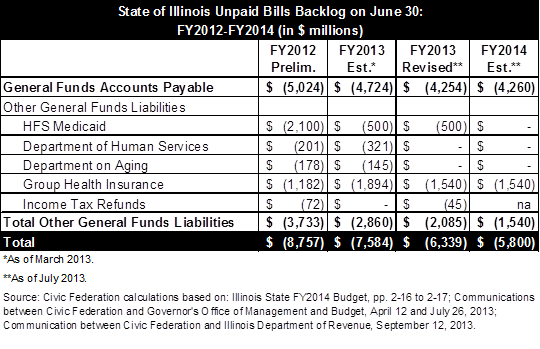 The projections above are rough estimates, presented to show the magnitude of State obligations and the general trend. The actual backlog of bills at the end of FY2014 will depend on the State’s actual revenues and operating costs for the year. Group health insurance bills, for example, could grow if the State’s projected savings from a new union contract are not realized.

General Funds payables are the payments and transfers owed to vendors, social service agencies, school districts, local governments, pension funds and other State funds at the end of the fiscal year on June 30. The State’s General Funds payables grew during the national economic recession, reaching a peak of $6.1 billion at the end of FY2010. These bills are paid out of the next year’s revenues during the lapse period, which has been extended to December 31.

Not all costs incurred in a given fiscal year must be paid out of that year’s appropriations. Obligations known as Section 25 liabilities and consisting mainly of Medicaid and State group health insurance bills can be paid from future years’ appropriations. The State has used Section 25 liabilities to mask operating deficits by appropriating an insufficient amount to cover costs in one year, knowing that remaining bills could be paid out of the following year’s budget. The ability to defer Medicaid bills in this way was curtailed by legislation enacted in 2012. The new law limited Section 25 liabilities incurred by the State’s principal Medicaid agency, the Illinois Department of Healthcare and Family Services (HFS), to $700 million in FY2013 and $100 million thereafter, with certain exceptions. Group health insurance liabilities were not limited by the new law.

Another General Funds liability that does not appear in the budget involves the Community Care Program in the Illinois Department on Aging, which is designed to allow seniors to stay out of nursing homes. Obligations of the Department on Aging have not been Section 25 liabilities, but in recent years annual appropriation bills have allowed the program’s prior year costs to be paid for out of the current year’s funding. This language has allowed the State to budget expenditures in a given year that are below expected costs in order to help balance the budget. An amendment to Section 25 of the State Finance Act in 2013 authorized the Department on Aging to pay up to $150 million of prior year costs of the Community Care Program from FY2014 appropriations.

The decrease in unpaid bills from FY2012 to FY2013 resulted partly from the surge in income tax collections in April 2013. As discussed here, this April Surprise occurred because wealthy taxpayers shifted income into 2012 to avoid higher federal tax rates. State income tax receipts in FY2013 ended up at $2.1 billion higher than expected at $19.7 billion.

Prior to the April Surprise, Governor Pat Quinn’s office had expected unpaid bills to total roughly $7.6 billion at the end of FY2013. The actual total is now estimated at approximately $6.3 billion. Additional revenues were used to pay down all accumulated bills of the Department of Human Services and Department on Aging and $350 million was used to prevent an increase in group health insurance bills.

The Governor’s Office projects that Medicaid-related programs will be adequately funded in FY2014 and that there will be no growth in group health insurance bills due to savings from the State’s new three-year contract with the American Federation of State, County and Municipal Employees (AFSCME). The FY2014 budget does not provide funding to pay off the backlog of health insurance bills, which is estimated at $1.5 billion.

The table above does not include back wages owed to union employees as a result of a dispute over cancelled raises. Although a judge ordered the State to pay the back wages and the Governor agreed to make the payments as part of contract negotiations with Council 31 of the American Federation of State, County and Municipal Employees, the ruling is being appealed by the Illinois Attorney General’s Office. The total amount owed is approximately $111 million, according to the Governor’s Office.