With new attention being paid to the cost of the State of Illinois’ Medicaid program, it seems logical to ask why the total annual costs of the program are not reflected in the State’s budget.

The answer lies in an obscure statutory provision, found in Section 25 of the State Finance Act, that allows Medicaid costs to be paid from future years’ appropriations. In simple terms, this provision allows the State to hold down Medicaid appropriations below expected costs in order to help balance the budget. Meanwhile, Medicaid bills pile up outside the budget.

Governor Pat Quinn acknowledged this longtime State practice in his FY2013 budget speech on February 22, 2012. The Governor’s $33.8 billion budget proposal keeps general operating fund appropriations for Medicaid unchanged from the FY2012 budgeted level of $6.6 billion. However, Governor Quinn also recognized that expected Medicaid costs were underfunded by $2.7 billion and charged the legislature with eliminating those costs to prevent growth in the backlog of unpaid Medicaid bills.

Deferring Medicaid bills does not seem to be a common practice among other states. Illinois “is the only State that intentionally kicks its current Medicaid bills into future fiscal years,” the Governor said in his budget speech.

The practice goes back at least 20 years, according to an FY2013 budget presentation by the Illinois Department of Healthcare and Family Services (HFS). In the current fiscal year, which ends on June 30, 2012, Medicaid costs in the general operating budget were underfunded by roughly $1.7 billion.

In general, Section 25 of the State Finance Act requires that State bills from a given fiscal year must be paid with that same year’s appropriations. The State has an additional period after the end of the fiscal year, known as the lapse period, during which bills can be processed and revenues from the next fiscal year may be used to pay for the current fiscal year’s appropriations. The lapse period is usually two months but was extended to six months for FY2010 and FY2011 because of the large amount of unpaid bills.

However, that deadline does not apply to Medicaid bills, State employee health insurance claims and certain other State bills. Under exceptions to Section 25, these liabilities can be paid from subsequent years’ appropriations.

According to the Illinois Comptroller’s Office, the Section 25 exception for Medicaid was initially used to help healthcare providers by allowing the State to pay bills that arrived or were processed after the end of the lapse period. The provision then became a budgeting tool, allowing the State to mask budget deficits by appropriating an insufficient amount to cover Medicaid costs in one year, knowing that remaining bills could be paid in the next year. The deferred bills are known as Section 25 liabilities.

Medicaid reform legislation enacted in January 2011 requires that Section 25 liabilities be phased out over a ten-year period and eliminated in FY2021. Beginning on June 30, 2021, the lapse period for payment of these bills is extended to four months from two months.

The following chart, based on data from the Comptroller’s website, shows Section 25 liabilities in the general operating fund from FY2000 through FY2010. 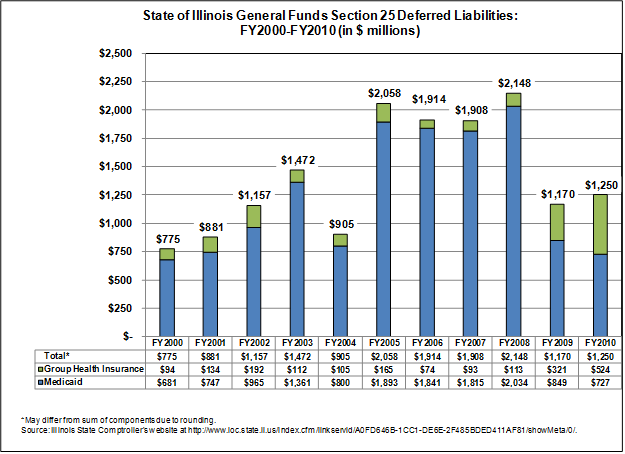 As shown in the chart, Medicaid bills have represented most of the Section 25 liabilities in the general operating fund since FY2000. Medicaid Section 25 liabilities declined after FY2008 because of a requirement under the American Recovery and Reinvestment Act of 2009 (ARRA) that certain Medicaid vendors be paid within 30 days. As noted by the Comptroller’s Office, however, underfunding of the State employee group health insurance program increased during the same time period.

ARRA eased pressures on the State budget by increasing federal reimbursement rates for Medicaid. Medicaid is a joint federal-state program that finances medical services for certain categories of low-income people, including children, pregnant women, the elderly and the disabled. State Medicaid expenditures are reimbursed by the federal government at a rate known as the Federal Medical Assistance Percentage (FMAP).

The FMAP in Illinois rose to nearly 62% as a result of the federal stimulus program but declined to roughly 50% after the program ended on June 30, 2011. Due to federal reimbursements, the cost to the State of paying off $2.7 billion in Medicaid bills would be roughly half of that amount.

It is important to understand that simply reducing Medicaid appropriations will not reduce Medicaid costs. Medicaid is an entitlement program under which certain categories of low-income people who meet eligibility requirements are entitled to specified medical services. To reduce Medicaid costs would require reductions in program eligibility, benefits or reimbursement rates paid to healthcare providers such as hospitals, nursing homes and pharmacies.

As discussed here, the State faces a variety of restrictions in reducing Medicaid costs. The HFS budget presentation outlined a menu of possible options for savings and concluded that significant reductions in reimbursement rates for healthcare providers would be required.