The State of Illinois FY2013 Budget Roadmap, issued on January 30, 2012 by the Civic Federation’s Institute for Illinois’ Fiscal Sustainability, relies on a five-year budget analysis by the Illinois Department of Healthcare and Family Services (HFS). The HFS analysis is now available on the website of the State’s Budgeting for Results Commission.

The HFS analysis sheds light on the complexity of Medicaid funding and provides an unusually long term perspective on State finances. The analysis shows that unpaid Medicaid bills would grow to $21.0 billion by the end of FY2017 if General Funds appropriations for the program increased by 2% a year for the next five years.

The conclusion is particularly interesting in light of Governor Pat Quinn’s recent three-year budget projections, discussed here, which assume that Medicaid appropriations will remain flat from FY2012 to FY2015. The Governor’s projections do not reflect the growth in unpaid Medicaid bills that would occur if the program were funded at the FY2012 appropriation level. The Governor has acknowledged, however, that significant Medicaid reductions would be required.

Some background on the Medicaid program is needed in order to understand the HFS analysis. Medicaid is a joint federal-state program that funds medical services for certain categories of low-income people, including children, pregnant women, the elderly and the disabled. Enrollment in the Illinois Medicaid program grew by 16.2% to 2.7 million recipients at the end of FY2011 from 2.4 million at the end of FY2008.

State Medicaid expenditures are reimbursed by the federal government at a rate known as the Federal Medical Assistance Percentage (FMAP). The FMAP for Illinois rose to a peak of nearly 62% due to the federal American Recovery and Reinvestment Act of 2009 but has dropped back to 50% since stimulus funding ended on June 30, 2011.

Total HFS Medicaid costs are estimated at $14.3 billion in FY2012, up 13.9% from $12.8 billion in FY2009. HFS prefers to focus on Medicaid costs rather than budgetary appropriations because costs are not dependent on when bills are paid. Illinois law (a provision of Section 25 of the State Finance Act) allows the State to pay outstanding Medicaid bills from future years’ appropriations. As a result, the State has repeatedly carried over substantial Medicaid liabilities to help balance its budget.

Medicaid is partly funded out of the State’s General Funds, which support the regular operating and administrative expenses of most State agencies and are the funds over which the State has the most control and discretion. In addition to General Funds, the Medicaid program receives funding from a number of other sources, including rebates paid by prescription drug manufacturers and payments by local governments and healthcare providers that are structured to enhance federal reimbursements. These other funding sources outside the General Funds are relatively stable.

HFS calculates anticipated total costs for services funded by General Funds and related funds. (This calculation leaves out roughly $3.5 billion in special funding agreements such as hospital taxes and an intergovernmental agreement with Cook County.) From these total costs, HFS subtracts expenses that can be covered outside the General Funds. The remaining costs require General Funds resources.

The following table, based on the HFS analysis, shows the anticipated increases in General Funds and related funds costs from FY2012 to FY2017. 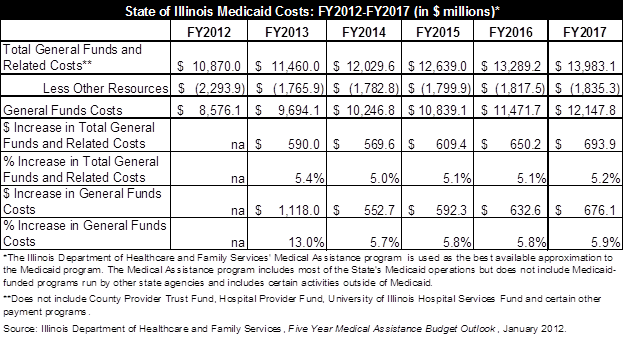 As shown above, General Funds and related costs increase by an average of 5.2% a year over the five-year period. The 13.0% increase in General Funds costs from FY2012 to FY2013 reflects an unusually large infusion of other resources in FY2012. During its fall veto session, the General Assembly authorized the transfer of $140 million out of General Funds into the newly created FY2012 Hospital Relief Fund (Public Act 97-0461) to help fund the Medicaid program. The same legislation authorized the transfer of $160 million to the Healthcare Provider Relief Fund, another fund that supports Medicaid. These combined transfers of $300 million represent $600 million in additional Medicaid resources after federal reimbursements.

The next table shows the anticipated increase in unpaid bills due to underfunding, given the assumption of 2% annual growth in appropriations incorporated into the HFS analysis.

Increased lapse period spending in FY2012 was based on FY2011 appropriations. The lapse period is the period during which the current year’s bills may be paid from the next year’s revenues. This period is usually two months but was extended to six months for FY2010 and FY2011.

Increases in Medicaid spending largely reflect rising costs throughout the United States’ health care system. Average annual U.S. healthcare spending is expected to increase by 5.8% from 2010 to 2020, according to National Health Expenditure projections. Medicaid costs also rise as more people qualify for coverage due to economic downturns, loss of employer-sponsored health insurance and demographic shifts such as the aging population. In addition, states can make their programs more generous by expanding eligibility and benefits. Medicaid reform legislation enacted by the State in January 2011 placed a two-year moratorium on expansion of the program.

Simply reducing Medicaid appropriations will not reduce Medicaid spending. Medicaid is an entitlement program under which certain categories of low-income people who meet eligibility requirements are entitled to specified medical services. To reduce Medicaid spending would require reductions in program eligibility, benefits or reimbursement rates paid to healthcare providers such as hospitals, nursing homes and pharmacies.

In attempting to control Medicaid costs, states face restrictions on program reductions. For example, certain coverage is mandated by the federal government, although states also provide optional benefits such as prescription drugs. As a condition of continued participation in the Medicaid program, national healthcare reform legislation enacted in 2010 generally required that states not tighten existing eligibility requirements.

The HFS analysis accounts for increased use of managed care, as mandated by the State’s Medicaid reform law enacted in January 2011. The analysis does not reflect the potential impact of national healthcare reform, under which up to 700,000 newly eligible Illinois residents are expected to participate in Medicaid between 2014 and 2019. The federal government will fully cover the costs of newly eligible recipients through 2016, with the reimbursement rate gradually declining to 90% for 2020 and later years. However, states are also expected to see an increase in enrollment by people who were previously eligible but not enrolled, whose costs will be reimbursed at the regular federal match rate.

For more information on the State of Illinois’ Medicaid program, please see the Institute for Illinois’ Fiscal Sustainability at the Civic Federation’s May 2009 report, The Illinois Medicaid Program: An Issue Brief. The HFS analysis is also available here.