On February 22, 2012, Governor Pat Quinn presented his administration’s fourth annual budget for the State of Illinois. The Governor’s FY2013 budget address to the General Assembly focused on the difficult financial challenges facing the State and the critical need to reduce Medicaid costs and unfunded pension liabilities.

In his speech, the Governor said that the recommended budget for FY2013 reflects the reality that there is no easy way for the State to fix its chronic financial problems. The proposal calls for politically unpopular spending cuts in many areas and a long list of controversial facility closures.

Through cuts to many agencies and continued underfunding of the State’s expected Medicaid costs, the Governor’s budget holds total General Funds spending mostly flat. General Funds support the regular operating and administrative expenses of most state agencies and are the funds over which the State has the most control and discretion. The operating budget also includes Other State Funds, which are accounts for activities funded by specific revenue sources that may only be used for specific purposes, and Federal Funds (other than those designated for General Funds), which support a variety of state programs funded with federal revenues. 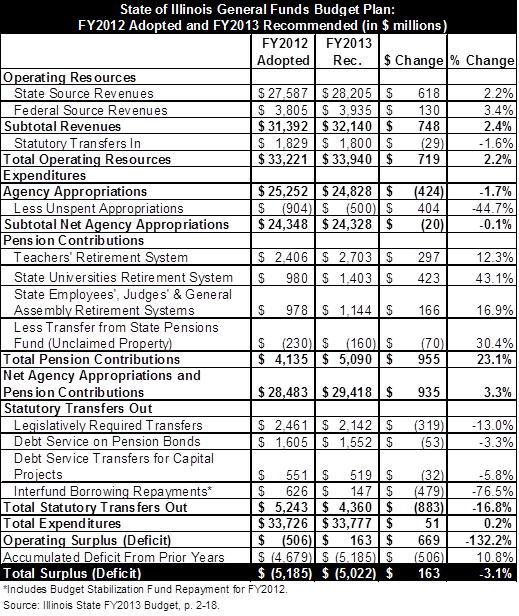 General Funds are also diverted or transferred out to Other State Funds to make debt service payments on bonds and for a wide range of other legislatively required transfers to other funds.

The growth in contributions is required by the State’s pension funding plan, which will increase the combined funded ratio of the retirement systems from 43.3% at the end of FY2011 to 90% by the end of FY2045. The funded ratio shows the portion of pension liabilities (projected benefits owed to retirees and existing employees) that are covered by pension assets.

In his budget speech, Governor Quinn set a deadline of April 17, 2012 for a bipartisan working group of legislators to develop a blueprint for stabilizing the three largest retirement systems. The working group includes Representatives Elaine Nekritz and Darlene Senger and Senators Mike Noland and Bill Brady. The Governor said the group should work with stakeholders and consider all options, including changes to funding practices, employer and employee contributions, increased retirement age and cost of living adjustments.

It should be noted that the table above shows unpaid bills at the end of the State’s fiscal year on June 30. Under state law, these bills must be paid during the lapse period, the period of time during which revenues from the next year may be used to pay for the current year’s appropriations. The lapse period is usually two months but was extended to six months for FY2010 and FY2011 because of the large amount of unpaid bills.

The table does not include certain bills that can be paid from future years’ appropriations. These bills consist mainly of Medicaid and State employee health insurance claims. At the end of FY2012, the State expects to be holding $1.9 billion in unpaid Medicaid bills and roughly $1 billion in unpaid group health insurance claims. The State also expects to owe $500 million in business income tax refunds, which are held outside of General Funds.

The recommended FY2013 budget shows General Funds appropriations for Medicaid flat from FY2012 at $6.6 billion, although Medicaid resources from Other State Funds increase by $330 million. Governor Quinn acknowledged in his speech that the proposed appropriation level would underfund expected Medicaid costs in FY2013 by $2.7 billion but said he will work with the General Assembly to reduce program costs by that amount. If those costs are not eliminated, the backlog of unpaid Medicaid bills is expected to grow from $1.9 billion at the end of FY2012 to $4.6 billion at the end of FY2013.

A legislative working group that includes Representatives Sara Feigenholtz and Patti Bellock and Senators Heather Steans and Dale Righter is considering ways to cut Medicaid costs. The Governor said he would require the General Assembly, which is scheduled to adjourn on May 31, to work through the summer if necessary to pass legislation to reduce Medicaid costs.

At a budget briefing after the Governor’s speech, Julie Hamos, the Director of the Department of Healthcare and Family Services (HFS), indicated that it would be extremely difficult to cut annual costs by $2.7 billion, an amount that represents nearly 24% of FY2013 Medicaid costs of $11.5 billion. (As discussed here, this is an approximation of the costs of Medicaid, which does not have a programmatic designation in the State budget. It includes General Funds and related costs in HFS’ Medical Assistance program.)

Both the Governor and the HFS Director cited the FY2013 budget roadmap report by the Civic Federation’s Institute for Illinois’ Fiscal Sustainability, which stated that unpaid Medicaid bills could increase to $21.0 billion by the end of FY2017 under existing policies. Medicaid projections in the report were based on a five-year analysis by HFS.

At the budget briefing, Director Hamos presented a menu of possible options for Medicaid reductions. The options include changes in Medicaid eligibility, where not prohibited by federal law; elimination of optional services or tighter restrictions on use of optional services; and new or increased co-payments by recipients for services. However, Director Hamos said that only significant reductions in Medicaid reimbursement rates paid to healthcare providers would generate the necessary level of savings.

The Governor in his FY2012 budget proposed rate reductions of 6% for hospitals, nursing homes, pharmacies and certain other healthcare providers that would have resulted in approximately $550 million in annual savings. The proposal, which was strongly opposed by hospitals, was not approved by the General Assembly. Director Hamos said that officials are now considering rate reductions of 9%, designed to generate $825 million in savings.

Despite rising healthcare costs, the Governor’s FY2013 budget proposal includes a $265 million decrease in General Funds appropriations for employee health insurance. Without reductions in program costs or increases in employee premiums, the decreased State funding would result in an increase in unpaid bills at the end of FY2013. The State is currently up to a year behind in paying health insurance claims. In his speech, the Governor noted that approximately 90% of State retirees are not required to pay premiums for their health coverage.