The fact that the State of Illinois is no longer behind on paying business income tax refunds is good news for taxpayers and the State budget.

But due to an obscure provision of State law, the elimination of the refund backlog also means that the State will distribute an estimated $182 million less in Personal Property Replacement Tax (PPRT) to local governments in FY2013 than in FY2012.

How does this affect local government receipts of PPRT? Understanding the connection requires some background on how the State pays income tax refunds owed to taxpayers.

The PPRT is a revenue source for local governments that was created by the General Assembly in 1979 to replace a tax on the personal property of businesses that was abolished pursuant to the 1970 Illinois Constitution Article IX Section 5. As explained here, although its name refers to the tax it replaced, the PPRT is an income tax on the federal taxable income of corporations, business partnerships, trusts and Subchapter S corporations. PPRT revenues, except for amounts set aside to pay refunds, are deposited into another special fund, the PPRT Fund, and distributed to local governments.

The Department of Revenue makes it a priority to pay income tax refunds to individuals, so when there is a shortfall in the Refund Fund business refunds do not get paid. In FY2010 and FY2011, total receipts were inadequate to pay all refunds owed. The State did not pay PPRT refunds, resulting in transfers to the PPRT Fund in FY2011 and FY2012.

In FY2012 the State paid all required PPRT refunds to business taxpayers owed by June 30, 2012. This led to payments in excess of replacement tax receipts, so money must be transferred from the PPRT Fund to the Refund Fund in FY2013.

“In short, local governments received monies in prior years that now must be repaid” under State law, according to the Department of Revenue.

A table on the Department of Revenue’s website compares estimated PPRT payments to local government in FY2013 with FY2012 disbursements. Listed below is information for the 15 governments that are expected to receive the largest allocations in FY2013. 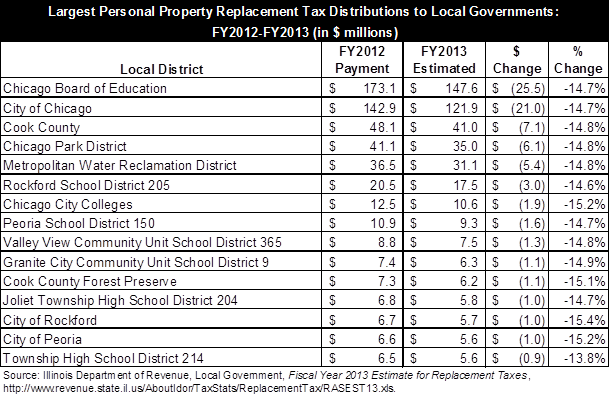 Not surprisingly, local officials are not pleased by the prospect of reduced PPRT revenues. “The last thing we need is to try to figure out how to plug another million-dollar hole in our budget,” Peoria’s mayor reportedly said recently. In FY2013 the City of Peoria is expected to receive a PPRT allocation of $5.6 million, a reduction of $1.0 million, or 15.2%, from $6.6 million in FY2012.

Next week the Civic Federation blog will examine the impact of changes in PPRT revenues on the City of Chicago’s budget.