Higher education was one of the areas hit hardest by the State of Illinois’ two-year budget impasse. This blog post examines how higher education fares under the budget enacted earlier this month by the General Assembly’s override of Governor Bruce Rauner’s vetoes.

The new budget has appropriations for fiscal year 2018, which began on July 1, and additional appropriations for the previous fiscal year. With the new spending authority, the State’s average annual funding for higher education from FY2016 through FY2018 is about 80% of the level in FY2015, the last year before the budget standoff. Average annual State funding for those three years is $1.5 billion, compared with $1.9 billion in FY2015.

Higher education received about $623 million in FY2016. As discussed here, a stopgap budget enacted on June 30, 2016 provided approximately $1 billion more, which could be used to cover FY2016 costs as well as FY2017 costs through the end of calendar year 2016. When the stopgap funding expired on December 31, 2016, it was not replaced until the new budget was enacted earlier this month. 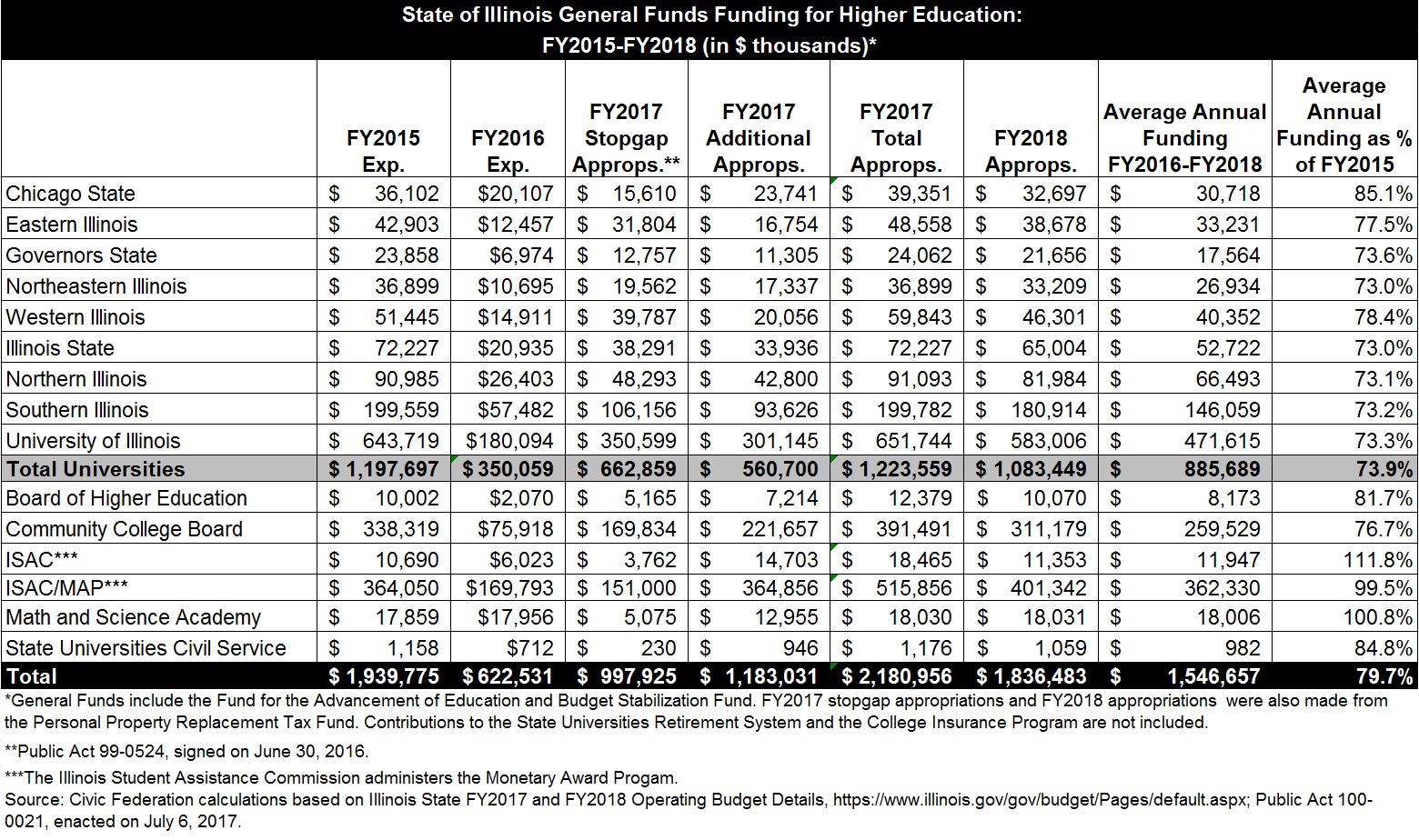 The size of the funding shortfall varies by category and institution. Illinois’ nine public universities are funded at an annual average of 73.9% of the FY2015 level. The percentage is higher—ranging from 77.5% to 85.1%—for financially shaky Chicago State, Western Illinois and Eastern Illinois Universities. The Illinois Community College Board, which distributes funds to 48 community colleges, is funded at 76.7% of the FY2015 level

The Monetary Award Program or MAP, which provides college tuition grants for low income students, is fully funded over the period. Supplemental appropriations in FY2017 and new appropriations for FY2018 more than offset the shortfall in FY2016.

The next table compares funding by category in FY2015 and FY2018. Overall funding for higher education—excluding pension contributions—declines by $103.3 million, or 5.3%, to $1.8 billion from $1.9 billion. 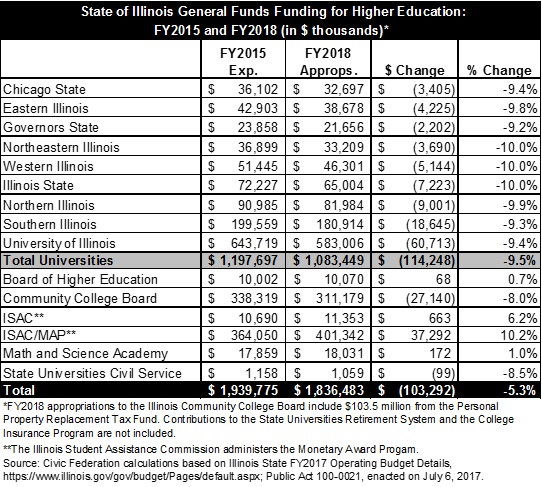 As discussed here, the funding shortfall in FY2016 and FY2017 forced public colleges and universities to spend down their reserves, eliminate jobs, institute furlough days and cut programs. During the budget standoff, many schools credited students’ tuition bills for their MAP grants, but officials said financial uncertainties led to declining freshman classes and aggressive external recruitment of key faculty members.

With the State’s credit rating falling due to the budget crisis, institutions were hit with their own downgrades. In late June 2017 the Higher Learning Commission told the Governor and legislative leaders that the continuing financial pressures on colleges and universities could affect the accreditation of Illinois institutions. Several Republican lawmakers who voted to override the Republican Governor’s budget vetoes in July specifically cited the financial distress of universities in their districts.

On July 13, a week after the new budget was enacted, the Illinois Comptroller’s Office said it was writing checks for $363 million in MAP grants for the 2016-2017 school year. The money was sitting in accounts designated for education that could not be tapped because of the budget impasse, the agency said.