As Illinois approaches the end of its second year without a complete budget, lawmakers are debating a new plan to provide partial funding for higher education and human services. This blog post examines the size of the funding gap and how far the proposal would go toward closing it.

Most State spending has continued during the prolonged budget impasse due to court orders, consent decrees, existing statutory authority and full-year enacted appropriations for elementary and secondary education. The areas that have received little or no funding from general operating accounts are higher education, human services programs not covered by court orders or consent decrees, day-to-day agency operations and group health insurance for State employees and retirees.

The Illinois House passed the bill on April 6, and the measure is currently pending in the Senate. Governor Bruce Rauner has said he would veto the bill without a permanent property tax freeze to protect taxpayers.

Previous partial spending authority for higher education and some human services programs ran out on December 31, 2016. Those appropriations were part of a much larger stopgap measure, signed by the Governor on June 30, 2016—the last day of fiscal year 2016. The stopgap funding could be used to cover FY2016 costs as well as FY2017 costs through the end of calendar year 2016.

The stopgap bill included about $2.4 billion of new appropriations from general operating funds and related accounts for agency spending (excluding elementary and secondary education). The total included $998 million for higher education and $792 million for human services, according to Civic Federation calculations, based on the FY2018 budget spreadsheet posted by the Governor’s Office of Management and Budget (GOMB). To help cover the costs, the State used a mix of one-time resources, including $275 million from depleting the Budget Stabilization Fund, the State’s only rainy day fund and $439 million from not repaying money borrowed from other State funds. It also used $150 million from a new assessment on hospitals in exchange for additional federal Medicaid dollars.

In contrast, money for the lifeline plan comes only from two State accounts designated specifically for higher education and human services under State law. Without appropriations by the General Assembly, money accumulating in the two funds may not be spent. 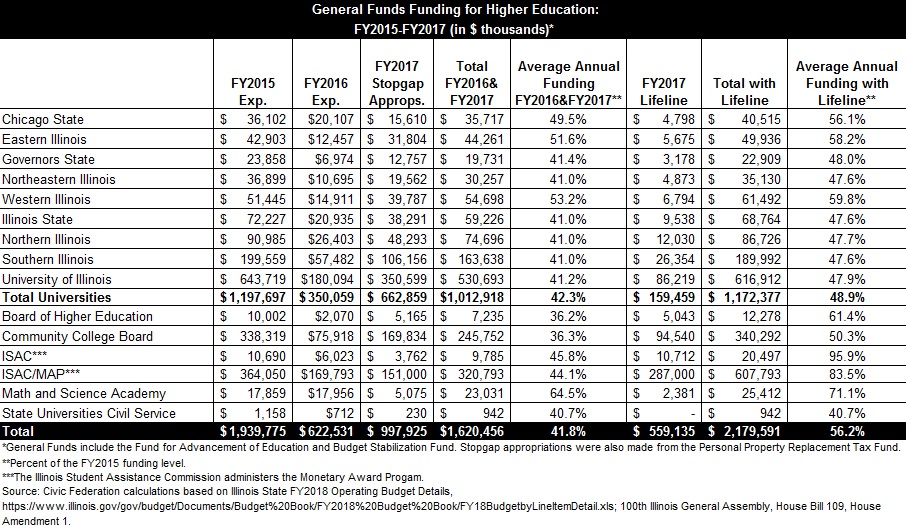 As shown in the table, public universities receive an average of 42.3% without lifeline appropriations and 48.9% with the additional funding. Financially shakier institutions such as Chicago State, Eastern Illinois and Western Illinois have received a larger share than the average.

With the lifeline bill, funding for MAP grants would reach an annual average of 83.5% of the FY2015 level. Without the lifeline appropriations, MAP funding for FY2016 and FY2017 has provided for less than one full year of grants. The additional funding will cover the first semester of the 2016-2017 school year and part of the second.

The area of human services covers a dozen State agencies, including the Department of Human Services, the Department on Aging and the Department of Children and Family Services. The money for human services in the lifeline bill comes from the Commitment to Human Services Fund, one of two new funds that began receiving about 3.33% of net income tax revenues from individuals, trusts and estates in February 2015. The fund, which can only be used to support human services, recently had a cash balance of $159.7 million, according to the Comptroller’s website. Some House members who opposed the lifeline bill expressed concern that the fund might not have the total $258 million needed under the measure by the end of FY2017.

The human services funding shortfall is harder to measure than the gap for higher education because most of the historical funding for the area has been provided through court orders and consent decrees. With virtually no appropriations, the State spent $4.68 billion on human services in FY2016, compared with $5.43 billion in FY2015. Programs not covered by court orders or consent decrees include home care for seniors who are not eligible for Medicaid, community mental health services and addiction treatment programs.

The Governor’s FY2018 budget book shows a remaining funding shortfall of $571 million for human services in FY2016.  GOMB officials estimate the gap for FY2017 at $381 million, bringing the total two-year amount needed to $952 million. Lifeline appropriations of $258 million would cover 27.1% of the shortfall.