Illinois is among 23 states that are expected to join the Medicaid expansion, according to a recent report by the Kaiser Family Foundation. The District of Columbia is also participating. As of July 2013, six states were still debating the expansion, while 21 had decided not to move forward.

The following table, based on the Kaiser report, shows the status of states’ decisions on the expansion as of July 2013. (Click to enlarge.) 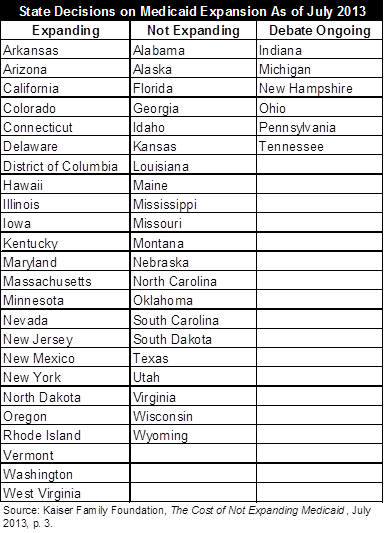 As discussed here, Medicaid expansion is one of the key provisions of the Affordable Care Act (ACA) designed to reduce the number of people without health insurance. Medicaid is a joint federal-state program that finances healthcare for specific categories of low-income people, including children, pregnant women, parents, the elderly and the disabled. Non-senior, non-disabled adults without dependent children have generally not been eligible for Medicaid.

The Medicaid expansion was made optional for states by a U.S. Supreme Court opinion in June 2012. The Supreme Court generally upheld the ACA but ruled that the federal government could not withhold matching funds for states’ existing Medicaid programs if they chose not to participate in the ACA expansion.

According to the Kaiser report, an additional 13.1 million people would have enrolled in Medicaid due to the ACA by 2016 if all 50 states participated. Only 4.8 million, or 36%, are in states that have decided to move forward with the expansion. The remaining 64% live in states that are not participating or have not yet made a decision. Texas, Florida and Georgia account for half of the projected enrollees in the states that are not joining the expansion.

Many of the states that are not participating would have seen the biggest enrollment increases because they currently have low Medicaid eligibility levels and large low-income uninsured populations, the report stated. Officials in states that have decided not to participate, such as Texas, have cited additional state costs and the possibility that the federal government will reduce its share of spending for newly eligible recipients.

The Illinois Department of Healthcare and Family Services (HFS), the State’s main Medicaid agency, has estimated that Illinois will have approximately 510,000 new Medicaid recipients by 2017 as a result of the ACA. Of that total, an estimated 342,000 will be newly eligible under the ACA. HFS projects that Illinois will receive $12 billion in additional federal funds for newly eligible recipients from 2014 through 2020 and pay an additional $573 million from State sources.

Cook County’s public health system is hoping to receive a significant financial boost from the Medicaid expansion. As discussed here, the Cook County Health and Hospitals System won federal approval in October 2012 for a demonstration project to enroll patients in Medicaid before the start of the federal expansion. The project, known as CountyCare, provided early access to federal coverage for uninsured patients who generally did not pay for their medical services.

Although states typically pay for Medicaid expenses and are then reimbursed by the federal government, Cook County, rather than the State of Illinois, contributes the non-federal share of Medicaid spending. The reimbursement rate has been 50% for CountyCare but will rise to 100% beginning in January 2014. The County’s preliminary budget estimates for FY2014, which begins on December 1, 2013, project net revenues of $175 million from CountyCare. That compares with an estimated $29 million in FY2013.

The Illinois Medicaid expansion bill, Senate Bill 26 (Public Act 98-0104), was amended in the final days of the spring 2013 legislative session to include a new regulatory structure for Institutions for Mental Diseases (IMDs). IMDs are nursing homes that specialize in treating mentally ill residents.

Advocates for the mentally ill were strong supporters of Medicaid expansion because many of the newly eligible recipients are expected to have mental health problems. However, the new provisions for IMDs—now known as Specialized Mental Health Rehabilitation Facilities or SMHRFs—were criticized by many advocates as an extension of institutional care.

In a written message accompanying the Medicaid expansion law, Governor Quinn said he had heard concerns that the new regulatory structure for IMDs would slow the State’s relocation of nursing home residents to community-based settings. The Governor pledged to support rules and possibly follow-up legislation to ensure increased reliance on community care.