The State of Illinois, like other states, is faced with a decision on whether to expand its Medicaid program in 2014 under the federal Affordable Care Act. The decision in Illinois is complicated by a State law that bans such a Medicaid expansion until 2015.

As discussed here, the State moratorium was lifted by the Illinois General Assembly in 2012 for the limited purpose of allowing Cook County’s public health system to gain early access to Medicaid coverage for newly eligible recipients in its County Care plan. But the federal government approved County Care only through December 31, 2013, meaning that 115,000 patients intended to be enrolled in the plan could lose Medicaid coverage unless Illinois joins the federal expansion in 2014.

Two bills pending in the General Assembly, Senate Bill 26 and House Bill 106, would lift the moratorium to permit Illinois to participate in the national expansion. On February 5, 2013, SB26 was approved by the Senate Public Health Committee by a vote along party lines, with six Democrats voting in favor of the bill and three Republicans voting against it.

Medicaid expansion is one of the key provisions of the Affordable Care Act (ACA) designed to reduce the number of people without health insurance. Medicaid is a joint federal-state program that finances healthcare for specific categories of low-income people, including children, pregnant women, parents, the elderly and the disabled. Non-senior, non-disabled adults without dependent children have generally not been eligible for Medicaid.

The Affordable Care Act extends Medicaid coverage to all adult citizens with annual incomes up to 133% of the federal poverty level (effectively 138%, or $15,415 for an individual in 2013, because 5% of income is disregarded in determining eligibility). The federal government is scheduled to pay 100% of the cost for the newly eligible population for the first three years of the program; 95% in 2017; 94% in 2018; 93% in 2019; and 90% thereafter.

The Medicaid expansion was made optional for states by a U.S. Supreme Court opinion in June 2012. The Supreme Court generally upheld the ACA but ruled that the federal government could not withhold matching funds for states’ existing Medicaid programs if they chose not to participate in the ACA expansion.

The Illinois Department of Healthcare and Family Services (HFS), the State’s main Medicaid agency, estimates that Illinois will have 513,000 new Medicaid recipients by 2017 as a result of the ACA. Of that total, an estimated 342,000 will be newly eligible under the ACA and 171,000 will be individuals who were previously eligible but had not enrolled in the program.

HFS estimates that 50% of new recipients will enroll in the first year, with enrollment ramping up over the next four years. Costs for the newly eligible are estimated at an initial rate of $454 per member per month in 2014. According to HFS, this is 10% more than the agency spends on recipients in its FamilyCare program, which covers low-income parents. HFS is proposing that newly eligible recipients receive the same benefits as FamilyCare enrollees, but the agency increased the cost estimate to account for uncertainties about the medical status of the new population. 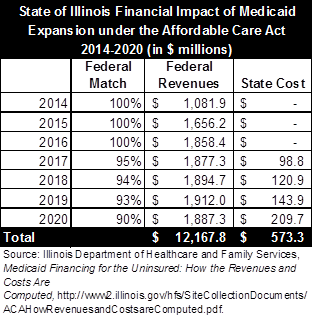 In addition to the revenues and costs shown above, HFS estimates that the State could save $105 million a year now spent for care of the uninsured. These costs, which would be covered by Medicaid under the expansion, include spending on substance abuse and mental health treatment and AIDS/HIV drugs. HFS plans to enroll the new Medicaid recipients in managed care, which is designed to improve care and lower costs by giving healthcare providers a financial incentive to keep people healthy, rather than tying payment to the volume of services provided.

Critics of the proposed expansion are concerned that HFS might have underestimated potential enrollment, resulting in an underestimate of State costs. A recent analysis by the Kaiser Family Foundation projected that Medicaid enrollment in Illinois will increase by 809,000 by 2022 due to the ACA. However, Kaiser based its projection of enrollment growth on an Illinois Medicaid population of 2.1 million, significantly below the more than 2.7 million actual enrollees, according to HFS.

There are also concerns that the federal government might reduce scheduled Medicaid reimbursement rates due to its own budgetary problems. To ease those concerns, the proposed legislation in Illinois ends coverage for the newly eligible population if the federal reimbursement rate drops below 90%.

Medicaid expansion in other states

In most states, the decision on whether to expand Medicaid under the ACA will not be final until legislatures take action. There is no federal deadline for deciding to proceed with the expansion. HFS, which has issued an implementation plan for Illinois, has said that it will take at least nine months to prepare for the expansion.

According to recent reports, a majority of governors have expressed opinions on the Medicaid expansion, with 14 Republicans opposed and 15 Democrats in favor. Although many Republican leaders have been opposed to the ACA, five Republican governors—in Arizona, New Mexico, Nevada, North Dakota and Ohio—have also said they will back the expansion. Some of them have warned that they will withdraw from the expansion if federal funding is reduced.

On February 4, 2013, Ohio Governor John Kasich became the latest Republican governor to announce support for Medicaid expansion. Governor Kasich said he remains opposed to the ACA but is concerned his state would be at a competitive disadvantage if federal tax dollars were used to expand health coverage in other states, creating a healthier workforce outside of Ohio.