On June 27, 2013, Cook County Board President Toni Preckwinkle released a report on preliminary budget estimates for fiscal year 2014, which begins on December 1, 2013 and ends November 30, 2014. The report provides an overview of mid-year FY2013 revenues and expenditures, expected current year-end estimates for FY2013 and projected revenues and expenditures for the upcoming FY2014.

The preliminary budget report is required by Executive Order 2012-1, issued by Board President Preckwinkle during her first year as County Board President. The Executive Order requires that the County issue preliminary budget estimates prior to the beginning of each fiscal year. The preliminary budget report is a useful tool to inform stakeholders of the County’s fiscal situation and help shape the development of the final proposed budget, which will be presented this fall. A public hearing on the FY2014 report will be held on July 11, 2013. Citizens are also able to provide input via the County’s budget website.

Preliminary budget estimates for FY2014 show revenues of $2.395 billion and expenditures of $2.547 billion, resulting in an initial General Fund deficit of $152.1 million. This is slightly larger than the $132.9 million budget gap for FY2014 predicted by the County in October 2012. However, it continues the decline in projected deficits under the Preckwinkle administration from $487.0 million in FY2011.

The current FY2014 deficit estimate of $152.1 million primarily reflects increased personnel and employee health benefit costs ($69.2 million), increased Cook County Health and Hospitals System vendor and supply expenses ($45.5 million) and costs associated with “Raise the Age” legislation, which will require 17 year-olds charged with felony offenses to be housed at the County’s Juvenile Temporary Detention Center rather than at the County jail ($12.0 million). The estimated FY2014 deficit also reflects reduced revenues due to the repeal of the 2008 sales tax increase ($28.0 million) and the diversion of property tax revenue to pay for election-year expenses ($21.0 million).

The chart below compares the approved FY2013 budget with the preliminary budget for FY2014. The County projects a $251.6 million increase in expenditures in FY2014, but only a $99.5 million increase in FY2014 revenue. The main source of the increased revenue is the CountyCare Medicaid expansion plan.

CountyCare, which was approved by the federal government in October 2012, allows the Health System to sign up low-income adults for Medicaid before Medicaid expansion begins under the Affordable Care Act (ACA) in January 2014. The plan was expected to boost the Health System’s revenue by bringing in federal reimbursements for patients who had been treated for free. CountyCare will end on December 31, 2013, but the Illinois General Assembly approved the State’s participation in the ACA Medicaid expansion beginning in January 2014. The Health System is expected to receive $356.2 million in revenues from Medicaid expansion in FY2014, an increase of $159.2 million from the budgeted FY2013 level of $197.0 million. After accounting for increased expansion costs, the net budget impact is projected at $175 million.

The revenue increase in FY2014 is related to increased federal reimbursement. From calendar years 2014 through 2016, the federal government is scheduled to pay for 100% of the costs of newly eligible Medicaid recipients. States typically pay for Medicaid expenses and are then reimbursed by the federal government; the reimbursement rate for Illinois is 50%. In the case of Cook County, the non-federal share of Medicaid spending is paid by the County, rather than by the State. 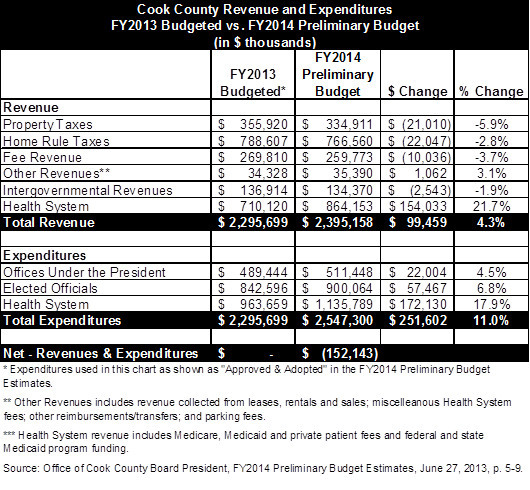 The preliminary budget report also includes a mid-year estimate of results for the year ending on November 30, 2013. The chart below provides a comparison of budgeted FY2013 revenues and expenditures as approved by the Board of Commissioners to the estimated year-end revenues and expenditures for FY2013. The County predicts a year-end shortfall of $18.1 million for FY2013, largely because of lower than expected revenues from CountyCare.

The Health System’s FY2013 budget included revenue of $197.0 million from CountyCare, based on expected enrollment of 115,000 members by the end of the calendar year. Applications are on track, but the State of Illinois is now expected to approve only 63,000 applications by the end of FY2013.

Revenues from the plan in FY2013 are currently projected at $122.3 million, or $74.7 million below budget. The shortfall would have been larger if the Health System had not been able to negotiate an advance payment of $30 million from the federal government. CountyCare had been expected to increase the Health System’s net revenues in FY2013 by about $101 million, after accounting for expenses; the current projection is approximately $29 million.
The shortfall from CountyCare is expected to be partially offset by increases in other patient fees of $35.3 million. These mainly consist of one-time revenues relating to Medicaid reimbursements and allocations from the federal and State governments. 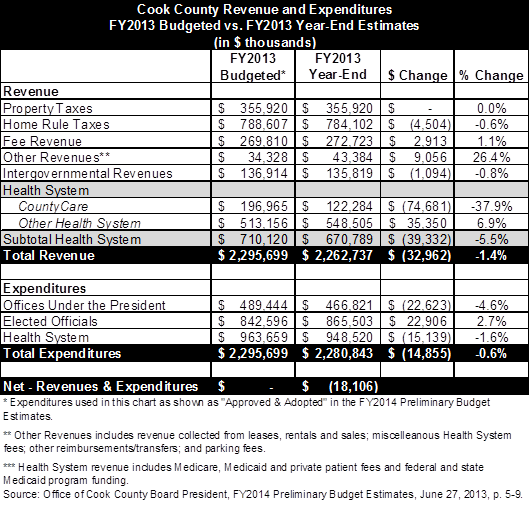 Year-end expenditures in FY2013 are expected to be below budget by $14.9 million, mostly due to not filling vacancies. Of the $14.9 million, the County estimates $11.3 million in “salvage” from employee healthcare costs savings due to fewer personnel). These expenditure savings are partially offset by pay and overtime expenses in the Sheriff’s Office ($14.0 million), Juvenile Temporary Detention Center ($900,000) and Clerk of the Circuit Court ($1.1 million).
Positive revenue variances for FY2013 year-end estimate include higher than expected revenue from Recorder of Deeds fees ($4.6 million), Clerk of the Circuit Court fees ($2.9 million), use tax revenue ($5.4 million) and non-retailer transactions revenue ($5.3 million).

To address the projected budget deficit, Board President Preckwinkle has directed offices under the President to identify and eliminate 20% of vacancies, and she has encouraged other County elected officials to follow this recommendation. At the press release for the Preliminary Budget Estimates, Board President Preckwinkle noted that County Treasurer Maria Pappas has already committed to implement the vacancies elimination.