Making good on a campaign promise, Illinois Governor J.B. Pritzker recently announced a plan to replace the State’s flat individual income tax rate with a graduated rate structure. The plan is projected to increase revenues by billions of dollars by raising effective tax rates on fewer than 3% of tax filers while lowering rates slightly for the remaining 97%.

The Governor said the new tax would bring in an additional $3.4 billion per year. That is exactly enough to cover an annual operating deficit estimated at $3.2 billion plus an extra $200 million—the amount recently proposed by the administration to bolster the State’s severely underfunded retirement systems. However, the Civic Federation has not been able to replicate the $3.4 billion number and the Governor’s Office has not yet provided information about the methodology used to arrive at the figure.

The proposal, which would require a constitutional amendment, could not take effect until 2021. The Civic Federation has not completed its review of the Governor's proposal and therefore has not finalized its position.

Despite questions about how much revenue the proposed graduated tax is likely to generate, there is no doubt that higher tax rates on a relatively small share of Illinois residents could significantly increase State revenues. This result is possible because of the distribution of taxable income in Illinois and the design of the proposed graduated rate structure.

According to the most recent data available from the Illinois Department of Revenue, individuals and couples filed 6.2 million income tax returns for 2016. Filers with taxable income of $250,000 or less accounted for more than 97% of the returns and paid 66.5% of total taxes, while wealthier taxpayers filed fewer than 3% of returns and paid 33.5% of taxes. Because of the State’s current flat tax rate, the distribution of taxes paid roughly matches the distribution of taxable income.

A Civic Federation analysis of the Governor’s plan based on 2016 data indicates that the share of taxes paid by those making more than $250,000 would rise to nearly 43%. Those at the top of the range—with taxable income of over $1 million—would see the biggest jump in their tax share: from approximately 16% to 24%. The share of taxes paid by tax filers with $250,000 or less would decline to about 57%. This analysis assumes no change to the 2016 tax base. 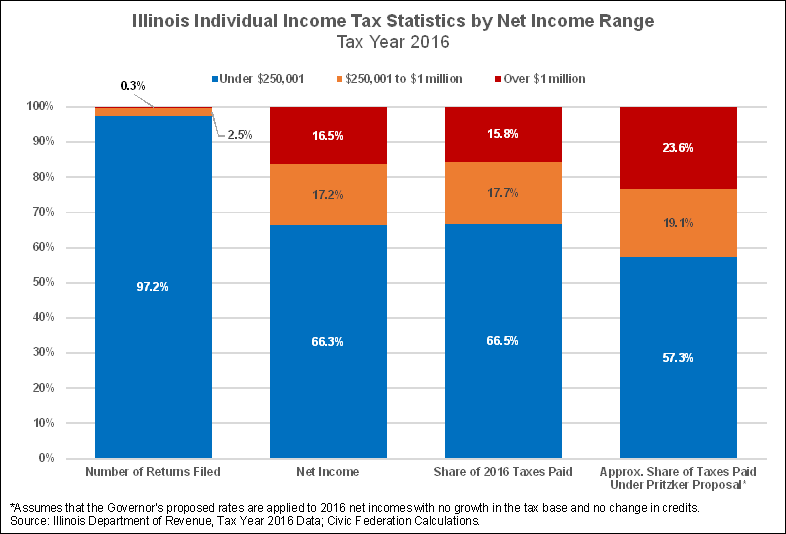 Governor Pritzker’s plan is based on Illinois net income. That number is usually less than the more well-known adjusted gross income (AGI) from federal tax returns. Illinois net income starts with federal AGI and then makes various adjustments, such as adding back in municipal bond interest payments that are tax exempt at the federal level. The biggest subtraction is for retirement income, which is taxed by the federal government but not by Illinois. Finally, there are exemptions that further subtract from AGI for filers and their spouses and dependents and additional exemptions for those who are over 65 years old or blind. Illinois filers reported AGI of $664.7 billion in 2016, compared with State net income of $337.4 billion.

The Governor’s plan is based on a schedule of tax rates that increase at higher income levels. The table below shows the rates included in the Governor’s plan, but does not account for any tax credits, including new credits proposed by the Governor.

For taxpayers with up to $1 million of net income, the Governor’s proposal uses a tax bracket structure applied in the same way as federal income taxes and most other states with graduated tax rates. The first dollars earned by all taxpayers are taxed at the lowest rates. Taxpayers earning more are subject to higher rates, but only on their net income above the threshold amounts for each bracket.

The tax rate applied to a filer’s last dollar of income is called the marginal rate. The ratio of the total tax paid to net income is the effective rate. Under the Governor’s proposal, filers with $100,001 to $250,000 would see no change in their marginal rate from the current 4.95%, and filers with more than $250,000 would face a higher marginal rate. However, filers with net income up to $252,321 would see lower effective tax rates, due to the tax cuts on their first dollars of income. After calculating the total tax, filers apply credits, which reduce the amount of taxes owed and further lower the effective rate.

Graduated income taxes that become flat at the top are rare, but not unprecedented, among other states. According to the Tax Foundation, three other states—Connecticut, Nebraska and New York—have similar rate recapture provisions.

The following charts show the proposed marginal and effective tax rates along with the distribution of individual income tax filers in Illinois. 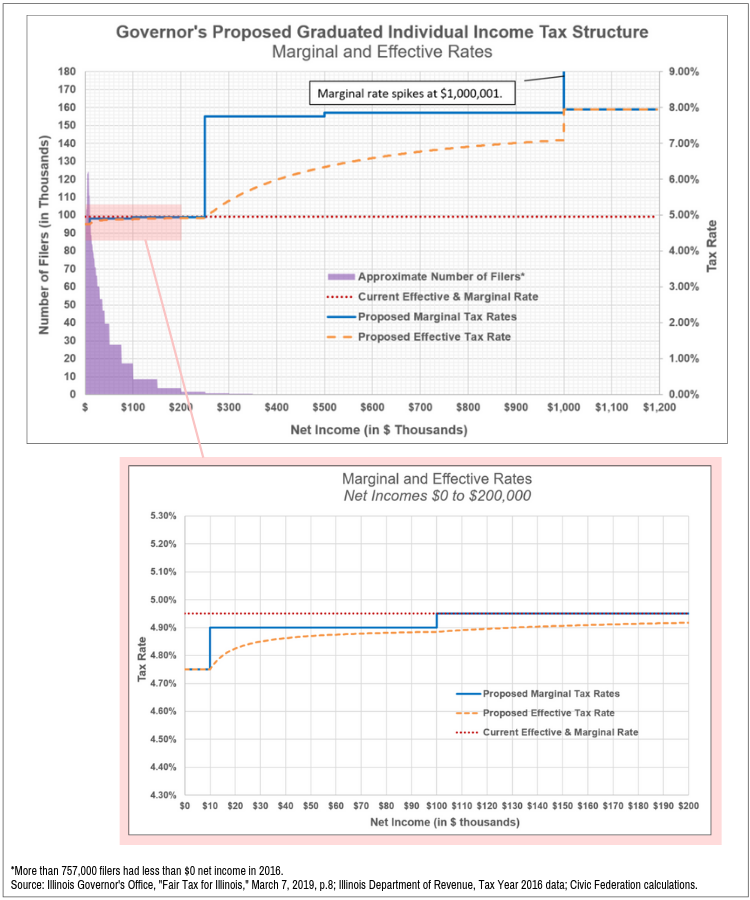 The Civic Federation’s analysis does not account for certain additional provisions of the Governor’s tax plan. For individuals, the plan would also increase the property tax credit by 20%, from 5% to 6%, and provide a new $100 tax credit for each child, which phases out beginning at $40,000 for single filers and $60,000 for joint filers. The current flat rate of 7.0% on corporate income would be increased to 7.95%. Corporations also pay a Personal Property Replacement Tax, which is actually an additional 2.5% tax on corporate income.

Amending the Illinois Constitution to allow a graduated income tax is a lengthy process. The first step is approval by a three-fifths majority of each chamber of the General Assembly. The measure could then be presented to voters in the next general election at least six months from the legislative approval date, which in this case would be November 2020. To become effective, the proposed amendment must be approved by three-fifths of those voting on the issue or a majority of those voting in the election.

In the meantime, the legislature is considering the Governor’s budget proposal for fiscal year 2020, which begins on July 1, 2019. As discussed here, in lieu of revenue from a graduated income tax Governor Pritzker proposed new taxes on recreational cannabis, sports betting, plastic bags and managed care organizations. Budgetary savings would come from deferring statutorily required pension payments by seven years. The Governor described the proposal as a bridge to financial stability based on a graduated income tax.

UPDATE: The analysis in this blog assumes no changes in the tax base since 2016, the last year for which data is available. The Governor's Office has since made clear that growth assumptions were applied in estimating the revenues produced by the proposed tax structure.