Despite increasing its revenue estimate on the final day of the regular legislative session, the Illinois General Assembly appears to have enacted a spending plan for FY2014 that exceeds the State’s expected resources.

On May 31, 2013, the legislature increased its General Funds revenue estimate for FY2014 to $35.4 billion in a resolution passed by the House of Representatives (HR389). That was an increase of $365 million over its original revenue estimate of $35.1 billion adopted in House Resolution 83 on March 5, 2013. As discussed here, the earlier legislative estimate came a day prior to the release of Governor Pat Quinn’s recommended FY2014 budget, which included General Funds revenues totaling $35.6 billion.

The following chart shows the three different revenue estimates and compares the final legislative amounts to the Governor’s proposed budget. 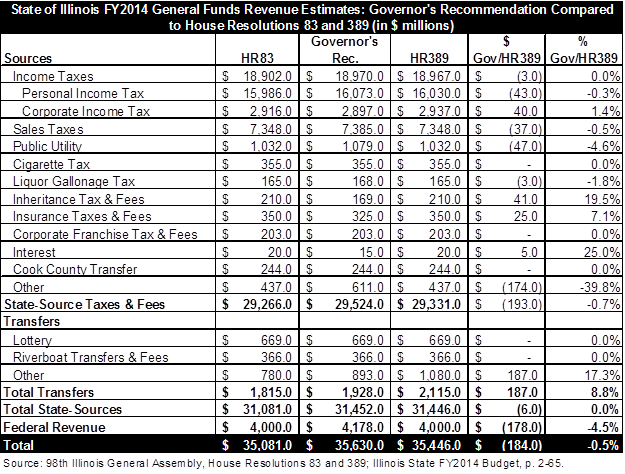 Since HR389 was approved by the House, the revenue estimate of $35.4 billion has been widely referred to as the total spending authorized for FY2014. However, according to a summary of the budget included in bond documents published by the Governor’s office, spending authorized by the General Assembly in the coming fiscal year will total $35.7 billion, exceeding both the updated legislative estimate and the total General Funds revenues in the Governor’s budget.

According to the Commission on Government Forecasting and Accountability’s monthly briefing for May 2013, the refund account surplus is expected to total $300 million and reducing the amount diverted to pay refunds will increase total income taxes by $65 million in FY2014. Despite the increase, the General Assembly’s revenue estimate remains $184 million below the Governor’s, almost entirely due to estimates of federal revenues. However, both revenue estimates are insufficient to fully fund the $35.7 billion in expected expenditures approved by the General Assembly for FY2014.

It should also be noted that the FY2013 revenues, as previously discussed here, are expected to increase by more than $2 billion over the General Assembly’s original estimates due to an unprecedented surge in income tax revenues in the month of April. The bond documents include an updated estimate of $36.3 billion for FY2013 General Funds revenue. This amounts to a $2.6 billion increase from the $33.7 billion estimate that the FY2013 enacted budget was based on and $1.4 billion more than the updated estimate of $34.9 billion included in the Governor’s FY2014 proposed budget.

In its May report, COGFA also increased its FY2013 General Funds revenue estimate to $35.7 billion. The more conservative estimate reflects the Commission’s perspective that the one-time surge in revenues in April 2013 was due to taxpayer efforts to minimize the tax consequences of higher 2013 federal tax rates and could negatively affect state revenues expected in May and June, the last two months of FY2013.

Data from the Illinois Department of Revenue for the month of May seems to support COGFA’s hesitance about the revenue growth in FY2013. Gross individual income tax receipts were $146.5 million below the forecasted amounts for May following the surge in April that was more than $1.0 billion above the original monthly forecast. Total corporate income tax revenues increased by $184 million in April and as of the end of May have exceeded the forecast for the entire year, according to the Revenue Department. The total of $824.3 million in corporate income taxes received by the State in April was the highest ever recorded in Illinois for a single month. However, May revenues fell to $129.1 million, which is lower than the May 2012 total of $143.2 million.