State Pays Down Backlog of Bills

Due to a surge in income tax receipts, the Illinois Comptroller’s Office has been able to reduce the State’s backlog of unpaid bills by $3.8 billion in the last four months.

General Funds bills and other payables in the Comptroller’s Office declined by 54.8% to $3.1 billion on April 30, 2013 from $6.9 billion on December 31, 2012. In addition to bills owed to vendors, State obligations include payments owed to school districts, universities and pension funds and fund transfers to support State agencies and local governments. The following table shows outstanding payables by fund and agency. (Click to enlarge.) 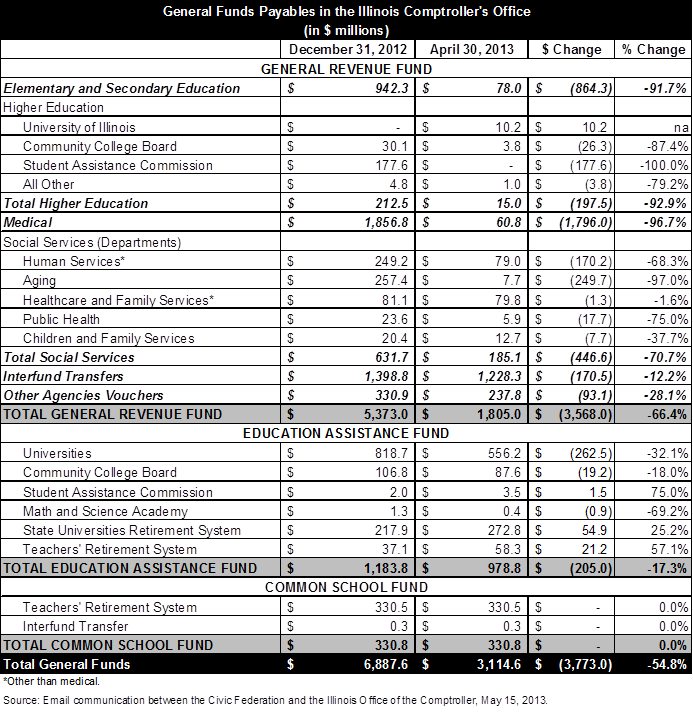 Medical bills, mainly relating to the State’s Medicaid program, declined from $1.9 billion at the end of 2012 to $60.8 million on April 30, 2013. Medicaid spending is generally reimbursed by the federal government at a rate of 50%. That means that paying off $1 dollar of Medicaid bills generates 50 cents in federal revenues, which can then be used to pay additional Medicaid bills. Through a cycle of State spending and federal reimbursement, the State is able to double its resources for Medicaid.

In the report, COGFA explained that the payment of bills was made possible by an unexpected jump in income tax revenues in April. Income tax revenues (net of amounts set aside for tax refunds) increased by $927 million, or 35.4%, to $3.5 billion in April 2013 from $2.6 billion in April 2012. Net personal income taxes grew by $681 million to $2.8 billion, while net corporate income taxes grew by $246 million to $709 million.

COGFA’s preliminary analysis attributed the revenue increase in April to actions by taxpayers to shift income to 2012 in order to minimize the impact of higher federal tax rates in 2013. Federal income tax rates and capital gains tax rates increased in 2013 for the highest-income taxpayers. Illinois income taxes are largely based on adjusted gross figures from the federal tax return. Other states have also seen unexpected growth in income tax receipts, according to the COGFA report.

It remains to be seen whether April’s results will cause State officials to revise their revenue forecasts for the current fiscal year, which ends on June 30, 2013, or for FY2014. COGFA warned that the higher income tax revenues in April were a one-time event and that tax changes affecting corporations may also have altered the timing of tax payments.

The Comptroller’s Office has not yet indicated whether it will change its estimates for the
year-end backlog in light of April’s results. In February 2013, the Comptroller’s Office said in a quarterly report that bills on hand at the end of FY2013 would probably exceed the FY2012 level of $5.0 billion by more than $500 million. The year-end backlog will also depend on any supplemental appropriations enacted for FY2013.

It should be noted that the State’s total backlog of bills includes both bills and other payables at the Comptroller’s Office as well as other liabilities held at State agencies. These other liabilities generally involve costs incurred without sufficient appropriations to allow payment in the current fiscal year. Such Section 25 liabilities, mainly related to Medicaid and group health insurance, may be paid from future years’ appropriations.

As discussed here, Governor Pat Quinn’s recommended budget for FY2014 estimates that the total bill backlog will decline from $8.8 billion at the end of FY2012 to $7.6 billion at the end of FY2013. The Governor’s estimate for FY2013 includes $4.7 billion in General Funds payables at the Comptroller’s Office and $2.9 billion in other General Funds liabilities.

Section 25 liabilities of the Illinois Department of Healthcare and Family Services (HFS), the State’s main Medicaid agency, were significantly limited by a law enacted in 2012. HFS Section 25 liabilities are expected to decline to $500 million at the end of FY2013 from $2.1 billion at the end of FY2012. However, group health insurance bills are expected to increase to $1.9 billion from $1.2 billion.