The FY2014 budget for the State of Illinois approved by the General Assembly has an operating deficit of $89 million, according to documents published in connection with an upcoming State bond sale.

The legislature’s budget authorizes General Funds spending of $35.699 billion for the year that begins on July 1, 2013, the bond documents show. General Funds revenues are projected at $35.610 billion, resulting in an operating deficit of $89 million.

The bond-related disclosure is the first formal analysis of the budget that was passed by the General Assembly on May 31, 2013. The bond disclosure came in a Preliminary Official Statement related to the expected sale on June 26 of $1.3 billion in General Obligation Bonds to fund capital projects.

This will be the State’s first bond sale since its credit rating was downgraded by two rating agencies in early June. Fitch Ratings and Moody’s Investors Service took the action after the General Assembly failed to pass comprehensive pension reform during its spring legislative session.

A presentation to potential investors by the Governor’s Office acknowledges that the adopted budget includes an operating deficit but states that it is expected to be eliminated by the end of the fiscal year on June 30, 2014 due to typical fluctuations of revenues and expenditures. The presentation also notes that the budget adopted by the General Assembly has not been signed by Governor Pat Quinn and that the Governor could veto or reduce certain line items. 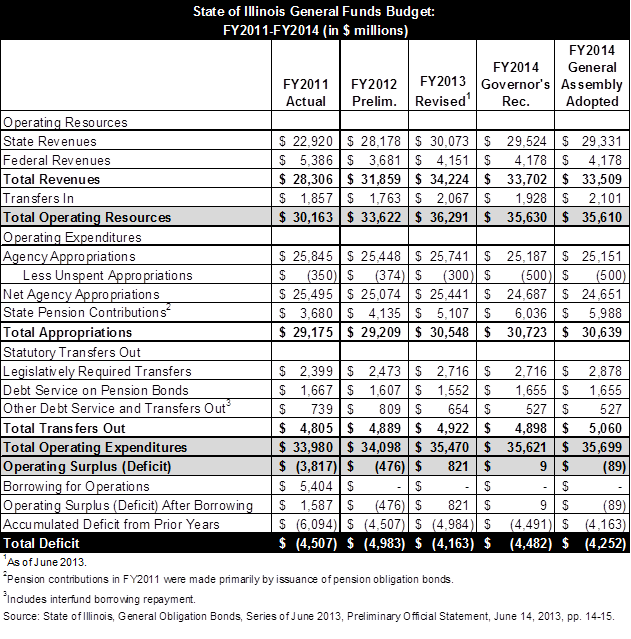 The table reflects recent changes in revenue estimates for FY2013 due to an unexpected surge in income tax receipts in April 2013, as discussed here and here. For FY2014 the federal revenue figure of $4.178 billion shown in the table is an estimate by the Governor’s Office. The General Assembly’s estimate for FY2014 federal revenues contained in House Resolution 389 is $178 million lower at $4.0 billion. Using the General Assembly’s estimate of federal revenue would have increased the projected operating deficit.

It should be noted that the total deficit of $4.482 billion shown for the Governor’s recommended FY2014 budget does not reflect the increased income tax receipts in April 2013. Those receipts are expected to increase the operating surplus in FY2013 and reduce the accumulated deficit to $4.163 billion at the end of that fiscal year, thus lowering the total deficit at the end of FY2014.

In developing its FY2014 budget, the General Assembly assumed that $650 million in appropriations would not be spent, compared with $500 million in unspent appropriations assumed by the Governor’s Office. The difference of $150 million would have decreased the projected operating deficit.

The General Assembly’s spending plan for FY2014 also includes legislatively required transfers out of General Funds of $2.878 billion, an increase of $162 million from the Governor’s recommended FY2014 budget. According to the bond documents, the legislature did not follow the Governor’s recommendation to cap transfers to local governments and mass transit agencies at FY2012 levels.

The Illinois Constitution requires that expenditures in the Governor’s annual recommended budget not exceed funds estimated to be available during the fiscal year. The requirement for the General Assembly’s budget does not appear to be as restrictive. The Constitution requires the General Assembly to pass a budget in which appropriations do not exceed funds estimated to be available. It is not clear whether this requirement applies to total expenditures, which include transfers out as well as appropriations.