In his FY2014 budget, the Governor proposed capping those distributions at FY2012 levels. Savings to the State are estimated at $143 million, according to State bond documents. The savings estimate is based on the difference between the proposed FY2014 payment and the projected payment under current law. Statutory changes would be required to enact the proposed caps.

State revenue is distributed to local governments and transit districts by transferring money out of general operating funds and into other funds that are specifically designated to receive it. As discussed here, General Funds are diverted to Other State Funds for a wide range of legislatively required purposes, as well as to make debt service payments on bonds. 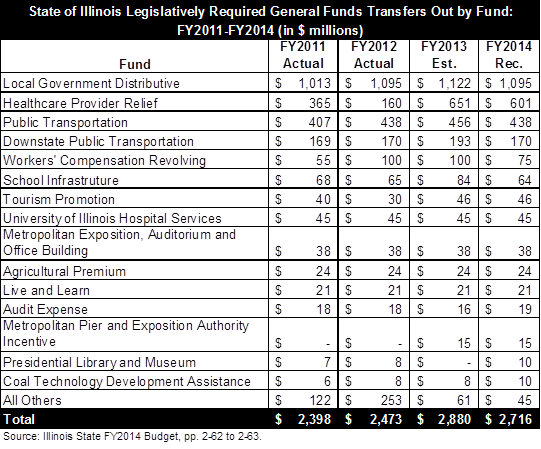 The largest legislatively required transfer out is to the Local Government Distributive Fund, which is estimated to receive 39.0% of all such transfers in FY2013. The Local Government Distributive Fund receives the share of State income tax proceeds that is distributed to local governments. The share had been 10% but was lowered in January 2011 after the State temporarily increased income tax rates so that the State could get the full benefit of the tax increase while preserving local governments’ portion prior to the increase. Local governments currently receive 6% of individual income tax revenues and 6.86% of corporate income tax revenues.

The Governor’s recommended budget for FY2014 caps income tax payments to local governments at the FY2012 level of $1.095 billion. That’s down $27 million from the amount estimated to be paid in FY2013, according to the Governor’s Office, and down $68 million from the projected payment for FY2014, which was based on the statutory percentages now in effect and the expected growth in total income tax revenues. 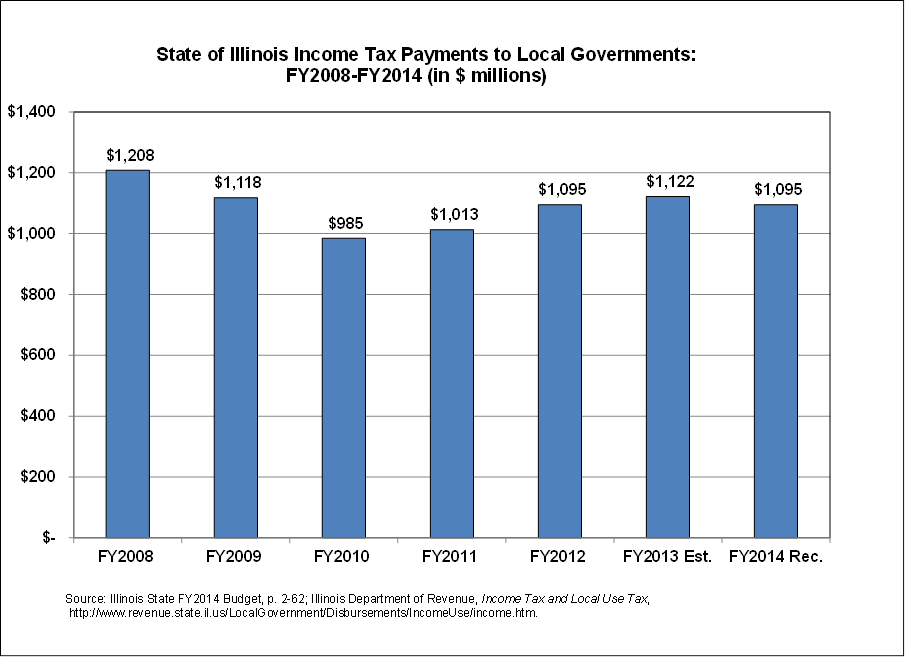 The Governor’s recommended FY2014 budget transfers $437.8 million to the Public Transportation Fund, down from $456.3 million in FY2013. The Downstate Public Transportation Fund would receive $170.2 million, down from $192.5 million. Transfers to the two funds are based on complex statutory formulas; it is not clear how much might have been paid to the funds in FY2014 before the Governor’s proposed freeze.

Significant transfers are also made to the Healthcare Provider Relief Fund, which supports the State’s Medicaid program. The FY2014 budget proposes a transfer of $601 million to this fund, down from an estimated $651 million in FY2013. In FY2013 transfers of $500 million were authorized to pay down $1 billion of outstanding Medicaid bills through a cycle of State spending and federal reimbursement. It should be noted that $151 million of the FY2013 transfers shown in the budget—to be used to close a projected gap in the Medicaid budget—have not yet been authorized by the General Assembly.