Chicago and Cook County residents who followed the pension debate at the State of Illinois might be surprised by the fact that proposals for pension reform for the City of Chicago and Cook County and pension reform legislation enacted for the Chicago Park District all require increases to employer contributions. This is in direct contrast to an Illinois process that focused on evaluating how much various proposals would save the State in contributions immediately and over time. Why won’t the significant pension changes proposed by Chicago area governments reduce employer contributions?

The short answer is that Chicago, Cook County and the Chicago Park District (among other local governments in northeastern Illinois) have been contributing an amount that is far below the actuarial needs of the pension funds. In contrast, the State of Illinois’ 50-year funding plan has required it to increase its level of pension funding over the past twenty years so that it is now contributing an actuarially-calculated amount that is determined by the needs of the fund. Thus, when state pension benefits were reduced by legislation passed last year, the cost curve of the pension program was bent to a level that triggered a decrease in the amount of employer contributions necessary to fund the annual cost of the program and pay off the unfunded liability.[1]

City, County and Park District contributions are currently so low that even significant reforms would not reduce costs below current contribution levels. So while pension reforms are projected to save money, those savings do not show up in comparison to their current funding levels, but in comparison to what governments ought to have been contributing.

A calculation of what governments should contribute to their pensions is part of the financial reporting requirements for public pension funds and their associated governments, which are set by the Governmental Accounting Standards Board (GASB). GASB standards require disclosure of an Annual Required Contribution (ARC). The ARC is the calculated payment that would fully fund the annual cost of the program and amortize the unfunded liability over 30 years. This amount is combined with any underfunding from previous years and interest on the annual and past shortfalls. The ARC is a reporting, not a funding requirement.

Under state statute, several Chicago area governments are not required to make contributions to their pension funds based on the pensions’ funding needs, but instead contribute a set multiple of what employees contributed two years prior. Since these multiplier contributions do not adjust according to the needs of the fund, employer funding levels for the Chicago area governments are very low compared to the ARC measure of actuarially sound funding.

Under current benefit levels, to fund the City of Chicago’s four pension plans at a level that would both cover normal cost and amortize the unfunded liability over 30 years, the City would have needed to contribute an additional 32.0% of payroll, or $1.0 billion, in FY2012. 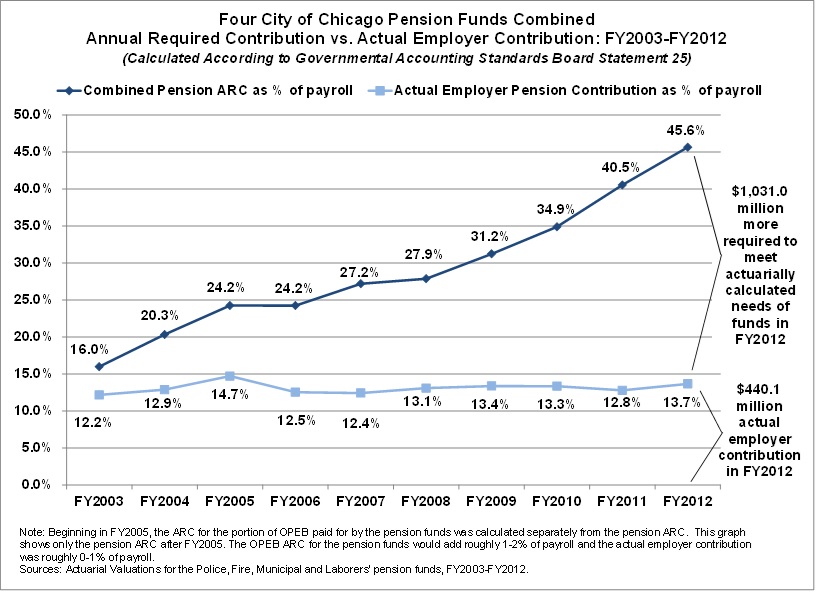 To fund current Cook County pension and retiree health care plans at a level that would both cover normal cost and amortize the unfunded liability over 30 years, Cook County would have needed to contribute an additional 31.2% of payroll, or $461.3 million, in FY2012. 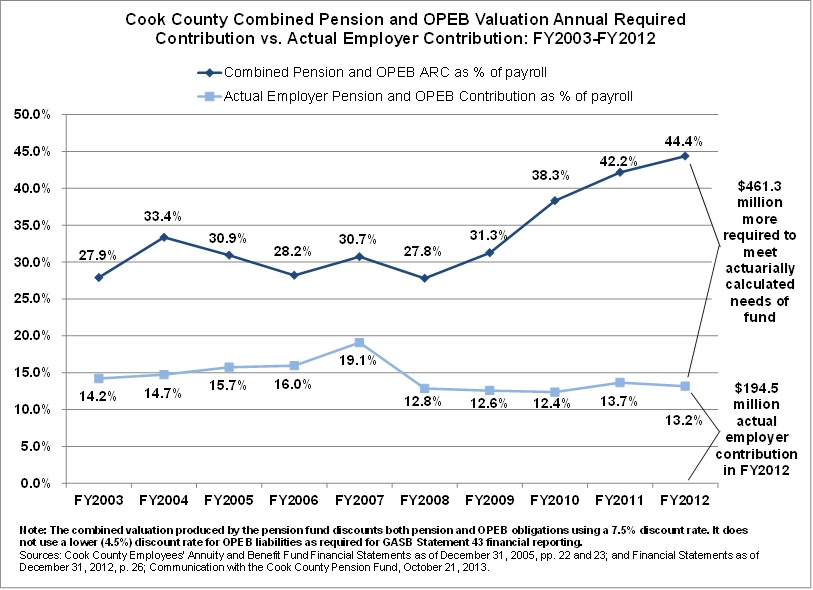 To fund the current Chicago Park District pension fund benefits at a level that would both cover normal cost and amortize the unfunded liability over 30 years, the District would have needed to contribute an additional 15.6% of payroll, or $17.2 million in FY2012. 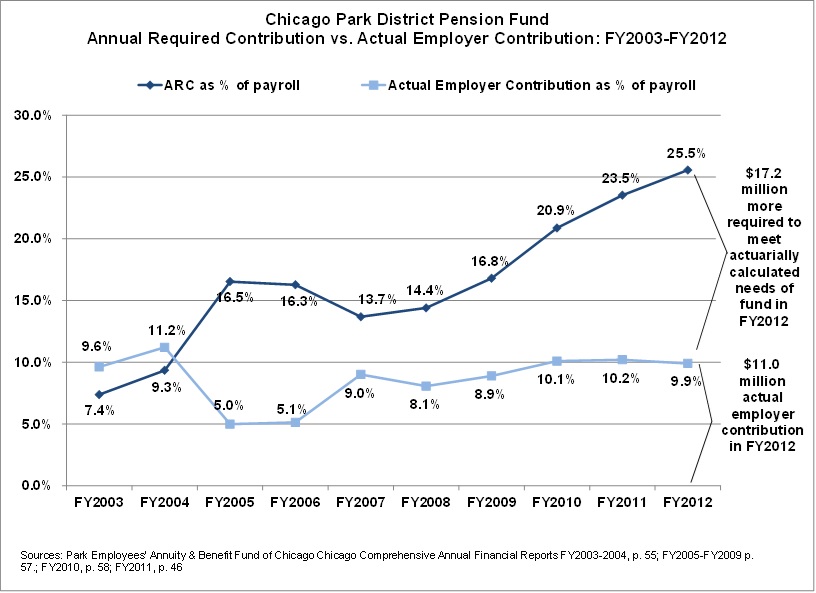 While the Civic Federation supports comprehensive pension reforms for Chicago area governments, the funds’ precarious fiscal position and history of underfunding will require an infusion of revenue. Shared sacrifice to ensure local pension funds will remain a reliable source of retirement benefits for government workers will entail BOTH cuts to employee benefits and increased taxpayer investment.

[1] Implementation of the State’s pension reform law had been scheduled to take effect on June 1, 2014, but retiree groups and a union coalition called We Are One Illinois won a temporary restraining order and preliminary injunction in Sangamon County Circuit Court that will prevent it from taking effect pending the outcome of litigation.