On November 6, 2013, the Illinois House passed Senate Bill 1523, House Amendments 3 and 4 and the Senate concurred with the changes the next day. The bill contains a number of provisions aimed at stabilizing the Park District’s underfunded pension fund and bringing the funded ratio to 90% funded by 2049. The bill has been sent to Governor Pat Quinn for his signature.

Current Status of the Pension Fund and Current Benefits

The Park Employees’ & Retirement Board Employees’ Annuity and Benefit Fund is a single employer defined benefit pension plan for employees of the Chicago Park District and the Fund. It was created by Illinois State statute to provide retirement, death and disability benefits to employees and their dependents. The pension fund does not provide healthcare benefits; rather, the Park District funds retiree healthcare on a pay-as-you-go basis. Additionally, members of the Park District pension fund do not participate in the federal Social Security program so they are not eligible for Social Security benefits related to their District employment when they retire. 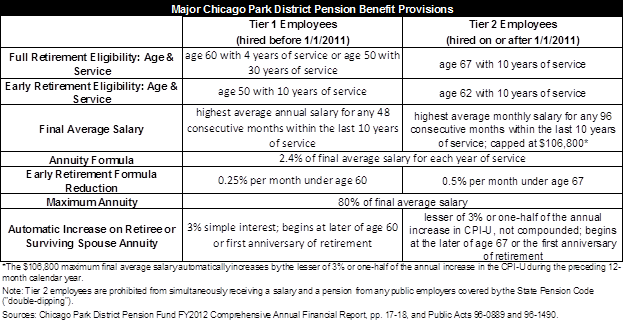 The Park District projects that with this pension reform legislation, the pension fund’s funded ratio will reach 90% by 2049 and 100% by 2054. According to testimony by the Park District at the Illinois House of Representatives’ Pension Committee hearing on November 6, 2013, the actuarial accrued liability is projected to decrease by a net of $107 million. The current actuarial accrued liability is $971.8 million. In order to meet these projections, the bill enacts a number of benefit and contribution rate changes, including:

The following table shows the timeline of phased-in changes to the Park District’s pension benefits and contribution rates, per SB1523, HA3 and HA4.

In addition to the above benefit and contribution changes, SB1523, HA3 and HA4 prohibit any benefit enhancements passed by the General Assembly that do not identify a sufficient matching funding source as certified by the State Actuary.

The following graph illustrates the projected funded ratio and unfunded actuarial liability (UAAL) of the pension fund under the provisions of SB1523, HA3 and HA4. It is important to note that the actuarial report provided to the Civic Federation assumes implementation of each of the legislation’s provisions one year prior to the actual language of the bill. As such, the significant drop in UAAL projected for FY2018 in the graph largely reflects the $50.0 million additional employer contribution scheduled for FY2019 under the provisions of SB1523. 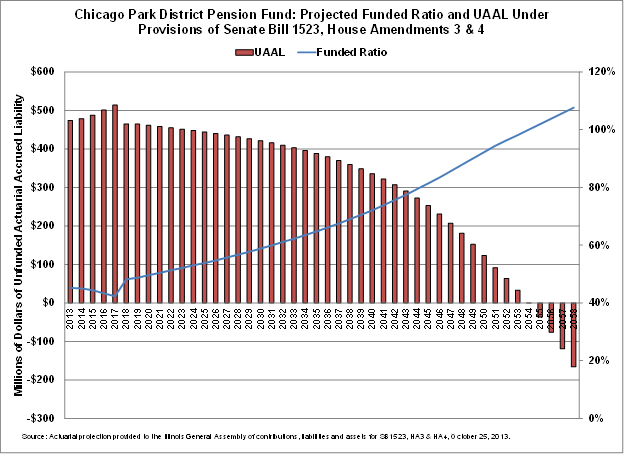 [1] Public Act 96-0889, enacted in April 2010, created a new tier of benefits for many public employees hired on or after January 1, 2011, including members of the Park District pension fund.