If the measure is approved by the Senate, Speaker Madigan said that he expects a court challenge. The Speaker said implementation of the law would be blocked by the court while lawsuits are adjudicated.

A new proposal by House Speaker Michael Madigan to address the State of Illinois’ pension problems was approved by a House committee on May 1, 2013 and sent to the House floor.

The new plan was approved by the House Personnel and Pensions Committee on May 1 by a vote of 9 to 1. It was placed on the House calendar to be discussed and voted on.

The new bill would make the following major changes:

• Limit automatic annual benefit increases to the lesser of 1) 3% of the pension benefit, compounded or 2) 3% of $1,000 multiplied by the number of years of service. Under this limit, a retiree not covered by Social Security with 30 years of service would receive a maximum annual increase of $900 a year. Current retirees receive unlimited compounded increases of 3%.
• Delay annual benefit increases until age 67 or until the fifth year after retirement.
• Phase in higher retirement ages for those under 45.
• Cap the maximum salary on which a pension is based at the same level as new employees (approximately $110,000 currently).
• Increase employee contributions by 2 percentage points, phased in over two years.
• Guarantee that the State make its contributions by requiring the pension funds to seek redress in the Supreme Court.
• Eliminate the requirement in State law that pension changes be subject to collective bargaining.
• Use an actuarial method supported by the Government Accounting Standards Board to allocate annual benefit costs. This method, known as entry age normal, smoothes pension costs over time compared with the projected unit credit method used by the State, which increases costs over time.

As discussed here, several components of the new plan were passed by the House in March 2013 in separate bills sponsored by Speaker Madigan. The House previously approved limits on the automatic annual increase, higher retirement ages and a cap on the maximum salary on which a pension is based.

At the House Personnel and Pensions Committee hearing, Speaker Madigan did not discuss the impact of his proposal on the State’s unfunded pension liability or annual pension contributions. However, actuarial reviews of the similar plan introduced in December 2012 suggested a $28 billion decrease in unfunded liability and a $1.8 billion reduction in annual General Funds pension contributions.

The State’s retirement systems had an unfunded liability of $96.8 billion and a combined funded ratio of 39.0% as of June 30, 2012, based on the market value of assets. State contributions are determined by a 50-year pension funding plan that began in FY1996 and deferred costs to later years. Largely as a result of this funding plan, annual pension expenses paid from the State’s general operating funds are expected to consume 24.5% of State-source general operating revenues in FY2014. Total expenses include $6.0 billion in statutorily required pension contributions and $1.7 billion in payments on pension bonds.

The next chart shows that the General Funds pension costs are estimated to grow to $12.5 billion, or 35.5% of State-source revenues, by FY2033. This estimate is based on revenue growth of 2.2% a year and the scheduled partial rollback of the State’s 2011 income tax rate increases in 2015 and 2025. (Click to enlarge.) 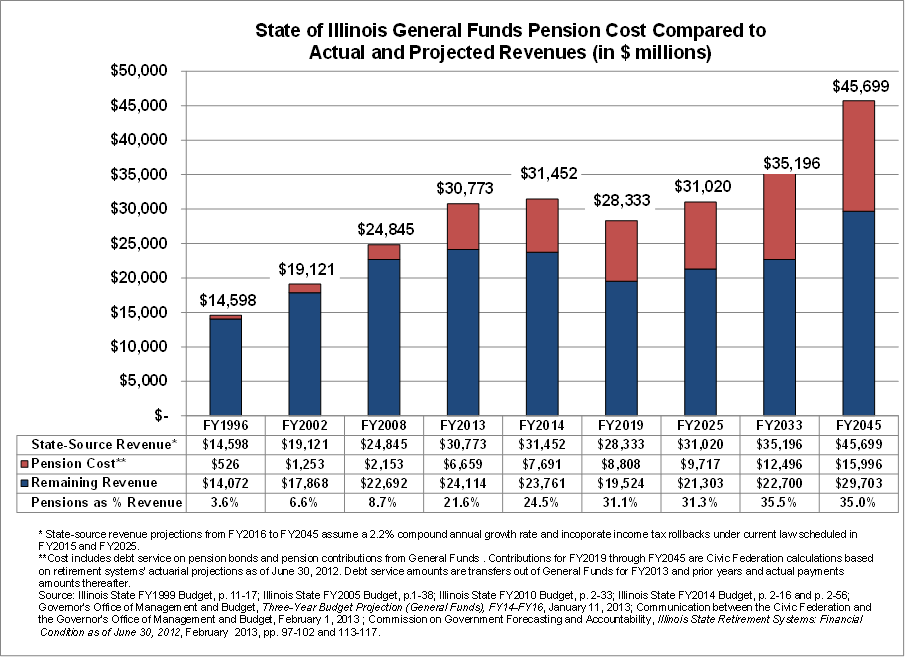 Efforts to reduce pension costs are complicated by a provision of the Illinois Constitution that states that membership in any pension system in the State is an enforceable contractual relationship and that member benefits “shall not be diminished or impaired.”

Legal opinions have varied on the interpretation of this provision, and any sweeping pension changes are expected to be challenged on constitutional grounds. At the committee hearing on May 1, representatives of several labor unions, including the American Federation of State, County and Municipal Employees (AFSCME), testified that the Speaker’s plan would violate the Constitution.

Supporters of Speaker Madigan’s approach have argued that the State retirement systems are currently in such bad shape that pension benefits are already impaired. Under this idea, a sustainable funding plan could withstand legal challenges even if it cut benefits because it would aid employees and retirees.

The preamble to the new plan appears to make this legal case for cutting pension benefits. It describes the State’s financial crisis and steps already taken to fix it; finds that the health, safety and welfare of Illinois residents is in jeopardy; and concludes that the fiscal problems cannot be solved without comprehensive pension reform.

Senate President Cullerton’s original SB1 was based on an alternative theory: that a reduction in benefits can only be constitutional if employees and retirees are granted something valuable in exchange. The original bill had two parts. Part A cut benefits and increased member contributions, while Part B gave retirement system participants a choice between retiree health benefits (and pensionable salary increases for current employees) and the existing automatic annual compounded increases of 3%. Senator Cullerton has maintained that Part A would be deemed unconstitutional. If so, then corresponding provisions of Part B would take effect.

On March 20, 2013, the Senate passed a narrower version of this bill by a vote of 30 to 22. The revised bill discarded the two-part approach and effectively retained the previous Part B, but only for active teachers covered by TRS. On the same day, the Senate rejected Senate Bill 35—which was similar to Speaker Madigan’s plan—by a vote of 23 to 30.

It remains unclear whether Senate President Cullerton will support Speaker Madigan’s plan. The Senate President has said that he is continuing to meet with union representatives in an attempt to reach a compromise.