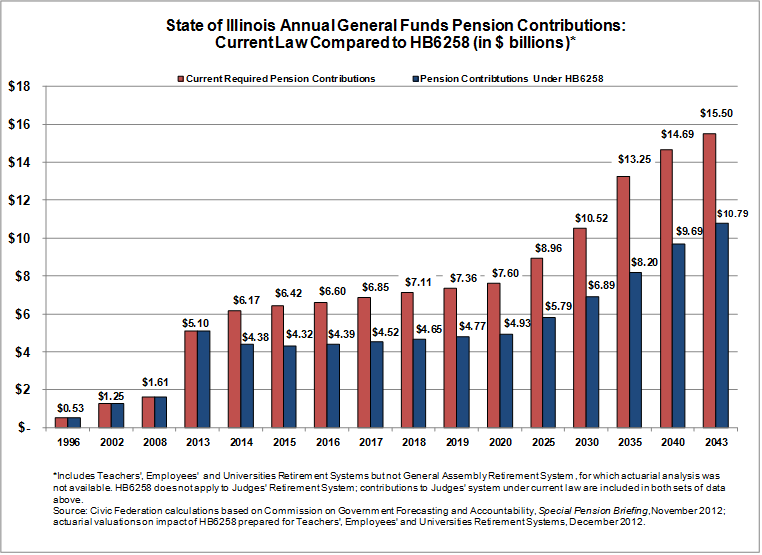 The chart above is based on actuarial reports for TRS, SERS and SURS, the largest pension funds, which accounted for pension obligations of $156.3 billion, or 98.5% of the total, as of June 30, 2012. An actuarial report for GARS, the smallest system, was not available. The chart excludes contributions to GARS and includes contributions to JRS under current law. Debt service payments on pension bonds—which are expected to total $1.6 billion in FY2013—are not included in the numbers. 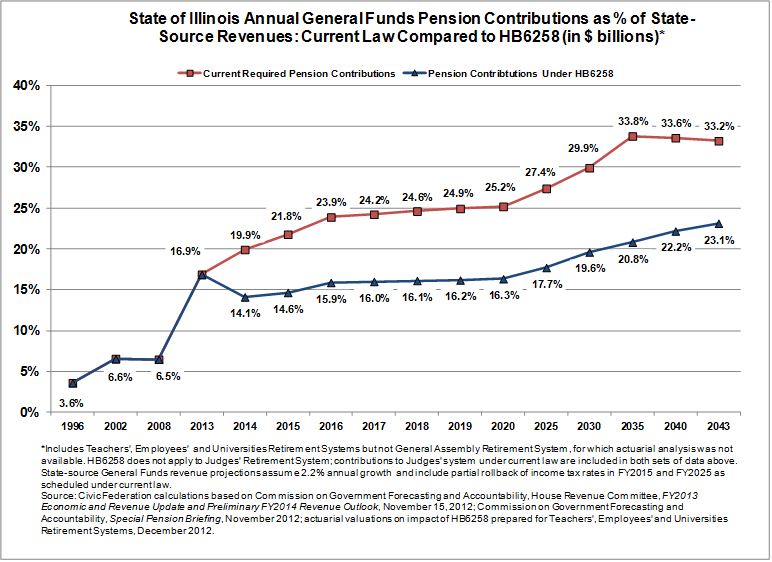 It should be noted that any comprehensive pension reform is likely to face legal challenges that could delay implementation. The Illinois Constitution states that membership in any public pension or retirement system “shall be an enforceable contractual relationship, the benefits of which shall not be diminished or impaired.”

Under HB6258, automatic annual benefit increases would be limited to $750 a year for those hired before January 1, 2011. Retirees would receive no annual increase until they reach age 67 or five years after they retire. Currently retirees receive annual compounded increases of 3%. Other changes for those hired before January 1, 2011 include a phased-in increase in retirement age; a phased-in two percentage point increase in contributions; and a pensionable salary cap. School districts, community colleges and universities would take over the State’s normal pension cost at a rate of 0.5% of payroll per year for normal costs incurred after July 1, 2013, until costs are fully shifted. New TRS and SURS employees would join a cash balance plan, with contributions by actual employers rather than the State.

At a press conference on January 3, the Civic Federation joined with a group of other civic organizations including the Better Government Association, the Metropolitan Planning Council and the Chicago Urban League to urge State lawmakers to embrace the bipartisan pension reform framework established by House Bill 6258. The groups called on the legislature to take up pension reform during the last days of the 97th General Assembly, which ends when the new legislature convenes on January 9.