The financial condition of the State of Illinois’ five retirement systems worsened in FY2012, with the systems’ total unfunded liability growing to $96.8 billion as of June 30, 2012 and the combined funded ratio declining to 39.0%.

The following table, based on recent actuarial reports for the retirement systems, shows their financial condition at the end of FY2011 and FY2012. 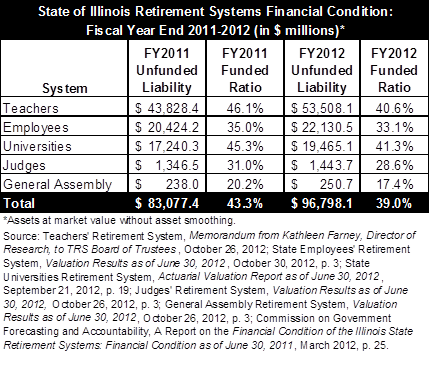 In the table, unfunded liability refers to the pension obligation that is not covered by pension assets, and funded ratio is the percentage of total pension liability covered by pension assets. The numbers in the table are based on the market value of assets. Since FY2009, State law has required that the actuarial value of assets be based on asset smoothing, in which unexpected gains or losses in any fiscal year are recognized over five fiscal years. Market value valuations are more volatile than actuarial valuations but provide a more realistic view of the systems’ actual financial position at the time of measurement.

Under this funding plan, annual growth in the State’s unfunded pension liability is expected. The plan does not meet financial reporting standards established by the Governmental Accounting Standards Board and provides inadequate funding until approximately FY2029 to prevent unfunded liability from growing.

The unexpected deterioration of the systems’ financial condition, beyond previous projections, was partly due to changes in actuarial assumptions by the State’s largest pension fund. As discussed here, the Teachers’ Retirement System (TRS) recently decreased its assumed rate of return on investment to 8% from 8.5% and reduced its expected mortality rate for retirees. These changes increased the present value of TRS’ pension obligations, increased the unfunded liability and decreased the funded ratio.

The five systems also experienced depressed investment earnings in FY2012. TRS, for example, previously announced that its rate of return on investment declined to 0.76% in FY2012 from 23.6% in FY2011. As a result, TRS was required to sell assets to cover benefit expenses in FY2012, according to an audio recording of the October 26, 2012 meeting of the system’s Board of Trustees. The State Universities Retirement System had investment returns of approximately 0.5% in FY2012, compared with 23.8% in FY2011.

Illinois’ retirement systems were ranked as the worst funded of any state in FY2010 by the Pew Center on the States. The Pew Center ranking showed the Illinois systems with a combined funded ratio of 45% based on asset smoothing. The report was issued in June 2012 and has not yet been updated.