The State of Illinois needs to contribute a total of $6.8 billion to its five retirement systems in FY2014 to meet statutory funding requirements, according to recent recommendations by the five systems. 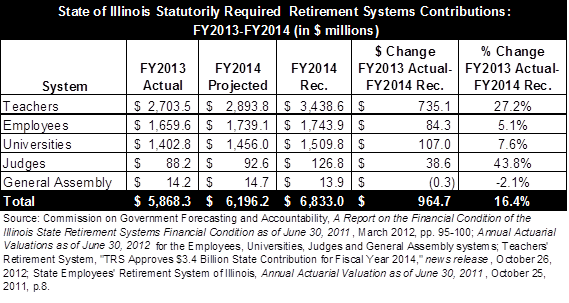 As shown in the table, the largest proposed increase from FY2013 to FY2014 relates to the Teachers’ Retirement System (TRS). As discussed here, TRS’ Board of Trustees on September 21, 2012 voted to lower the system’s assumed rate of return on investment to 8% from 8.5%. A lower assumed rate of return means that State contributions must increase to cover pension obligations. In addition to the lower assumed rate of return and other changes in actuarial assumptions, TRS’ proposed FY2014 contribution is also higher than previously projected because the fund earned a 0.76% return on its investments in FY2012, down from 23.6% in FY2011.

The proposed FY2014 State contribution to the Judges’ Retirement System is $126.8 million, an increase of $38.6 million, or 43.8%, from $88.2 million in FY2012. The Judges’ system for the first time calculated State contributions based on a level percentage of capped payroll. In April 2010, legislation was enacted that created a two-tier benefits system with lower benefits for state and many local government employees hired on or after January 1, 2011. The new tier of benefits included a cap on the maximum pensionable salary of $106,800 in 2011. If State contributions are calculated as a level percentage of capped payroll for new employees, then those contributions must be higher in the earlier years. Higher contributions in the earlier years are needed to offset decreasing payroll growth in later years when the workforce is increasingly made up of employees hired on or after January 1, 2011.

State contributions to the retirement systems are determined by a 50-year funding plan (Public Act 88-0593) that began in FY1996. After a 15-year phase-in period, the law requires the State to contribute a level percentage of payroll sufficient to bring the retirement systems’ funded ratios to 90% by FY2045. A funded ratio shows the percentage of pension liabilities covered by assets.

The funding plan and subsequently enacted changes deferred a large portion of the required contributions to later years. The funding plan does not conform to reporting standards of the Governmental Accounting Standards Board. For most of the funding period, the law has required State contributions that were insufficient to keep the unfunded liability from growing. For example, TRS’ FY2014 contribution based on actuarial standards would be $4.4 billion rather than $3.4 billion. The funded ratio for TRS, based on the market value of assets, declines to 40.6% at the end of FY2012 from 46.1% at the end of FY2011.

The proposed contribution amounts for FY2014 are based on recently completed actuarial valuation reports, which are done annually for each retirement system. Each system has been required to certify the contribution needed for the next fiscal year by November 15 so the Governor can include it in his recommended budget.

Beginning this year, under Public Act 97-0694 enacted in June 2012, the systems must submit proposed contribution amounts by November 1 to a State Actuary hired by the Illinois Auditor General. The State Actuary is required to review the systems’ proposed contribution amounts and recommend changes by January 1. The systems must explain why they did not accept any of the State Actuary’s recommendations and the financial impact of not following the recommendations when they certify the required State contributions. The final certifications are now due by January 15.

The Auditor General awarded a contract in September 2012 to McLean, Virginia-based Cheiron to be the State Actuary. Cheiron will be paid $167,200 to provide actuarial services until June 30, 2013.